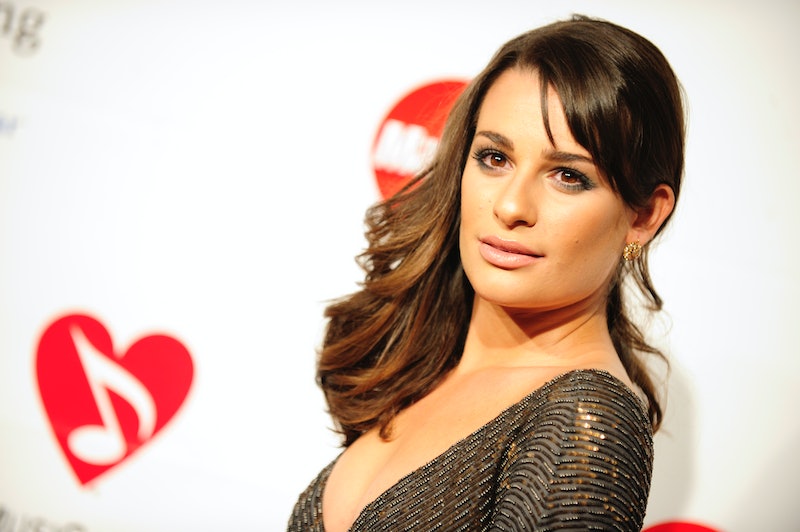 The sun has officially set on Glee, and its star, Lea Michele, is moving on to yet another Ryan Murphy project. Michele will star on Scream Queens , a new horror anthology from the TV creator about a college campus rocked by a series of murders. So far little is known about the series, save for a few creepy/awesome promos of college girls (played by Keke Palmer and Emma Roberts) snapping demon-filled gum. Now, new photos from the set of the upcoming series have emerged, and they paint a picture of Michele's new role. It looks like Michele won't be playing another so-called "gleek" like her iconic Glee character Rachel Berry — she's going full-on sorority girl.

The photos feature Michele decked out in a very sorority-esque pink and white dress, which seems to color coordinate with her co-star Emma Roberts' attire. But while Roberts has played It Girl Madison Montgomery on American Horror Story: Coven, this role is a huge departure for Michele, who spent the past six years starring as a girl constantly fighting for any scrap of respect from her classmates. While we can't assume too much from the photos of Michele, this character seems like part of the in crowd — something that Rachel never got to be a part of.

Of course, there's a good chance that this new character — sorority girl or not — won't be all that different from Rachel. As well as she channeled Rachel's vulnerable side, Rachel was also a little bit of a diva — she knew how to get her way when she wanted to. I wouldn't be surprised if Murphy cast Michele specifically because he knew how well she could play the part simply from seeing that side of Rachel come out on Glee.

Whether Michele is playing a benevolent sorority girl or one who rivals Regina George, I'm excited to see her take on a new TV role that will at least be somewhat of a departure from Ms. Berry.