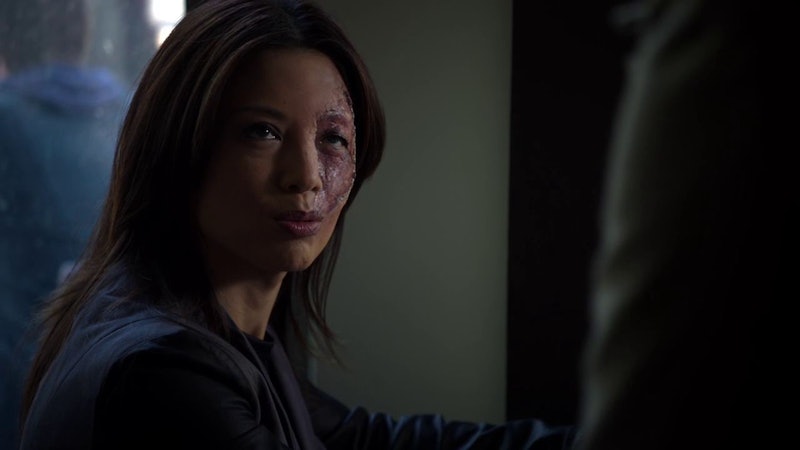 Well, that was weird. On Tuesday's episode of Agents of S.H.I.E.L.D. we saw Grant Ward return with Agent 33 in tow. The two of them were on a Bonnie and Clyde mission that started with "fixing" Agent 33's face and ended with the capture of Hydra Agent Sunil Bakshi from the U.S. Military's holding cell. As we learned in the first half of this season on Agents of S.H.I.E.L.D., Bakshi brainwashed Agent 33 into doing Hydra's bidding.

In the tag of the episode, Bakshi and Agent 33 had Bakshi bound to a chair in front of a television with swirly images. Sunil promised to comply, but Agent 33 did not care. What are they going to do with him? It looks like they plan on brainwashing him right back. Why? I suppose we can check Hydra off the list, but this would all seem a lot more urgent if I had any idea who they were working for.

If I'm being honest, this storyline kind of bored me until the end. I'm not interested in evil Ward and it's disorienting that the two of them are vigilantes now. I was just as relieved as anyone else when Agent 33 came to terms with her natural face at the end of the episode. It was difficult to identify with her when she was so many other people, but I guess that was the point. Her relationship with Ward is weird as well. I don't understand why he's staying with her. She's clearly got a thing for him but who hasn't, on this show?

However, trying to seduce him using Skye's face seemed like a low and desperate move. Either that, or the episode was hitting the "be yourself" message a little too hard on the head.

We also learned Agent 33's real name at the end of the episode — Kara, which is also her name in Marvel comics. All in all, I'm glad Bakshi is back in play whether he's being brainwashed or not. He's an interesting guy, and I'm looking forward to seeing how this all ties together on Agents of S.H.I.E.L.D.