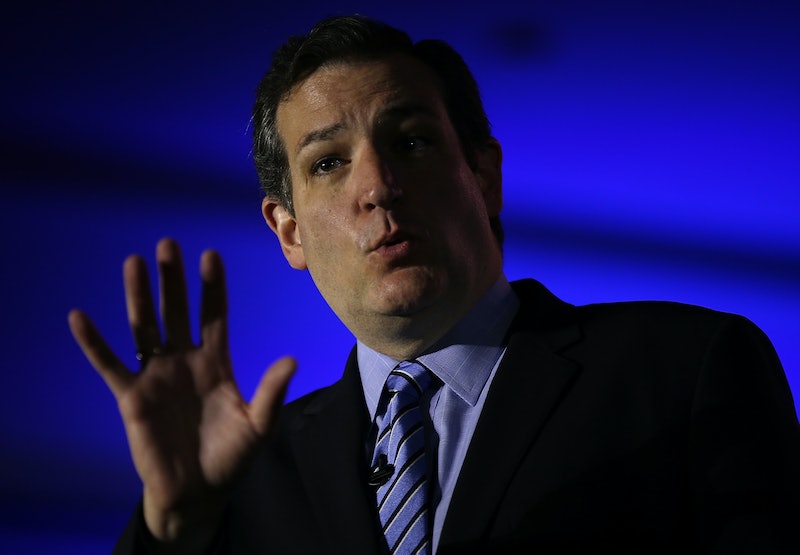 One of the newest enrollees in the Affordable Care Act exchange? Ted Cruz. But he's far from the first Republican to have to comply with the rules of the ACA. The Washington Post compiled available data on the status of health insurance among members of Congress — yes, most Republicans are covered, but this isn't as hypocritical as it looks.

So why are Republicans on the ACA, considering that most want to repeal it? Well, it's the law — under the insurance mandate, members of Congress are not totally except from the ACA. Their insurance is not covered by their employer, so members and their staffers can either enroll in a health care exchange, locally or federally, or they can pay out of pocket for whatever insurance plan they'd like. Looking at the list, most have opted into either a DC or federal exchange for healthcare benefits. But some members opted into their spouse's insurance plan, voiding having to consider any other options. That's what Ted Cruz did until this week.

House Speaker John Boehner documented his struggle to sign up for healthcare. He opted into the D.C. exchange, but when he attempted to sign-up via the D.C. Health Link website, it failed. He was a bit disgruntled, and it took an additional two tries and some assistance from customer service for Boehner to become enrolled. The Washington Post indicates that Paul Ryan, Marco Rubio, Kelly Ayotte, and Tom Coburn are just a few of the many others enrolled in the D.C. exchange, while Lindsey Graham is on the federal exchange.

It would be unfair to say that Republicans are hypocrites for enrolling in any insurance plan affiliated with the ACA. Let us remember that not a single Republican voted for universal health coverage. Boehner has been open about his experience, and why he's dissatisfied — his old plan cost $433 per month in premiums for both he and his wife, while the ACA plan costs $449 per month to just cover him. Perhaps some of the Republican enrollees are inspired to repeal the plan because of their personal experiences with it. When SCOTUS rules on King vs. Burwell, members of Congress will also be losing their subsidies on local exchanges.