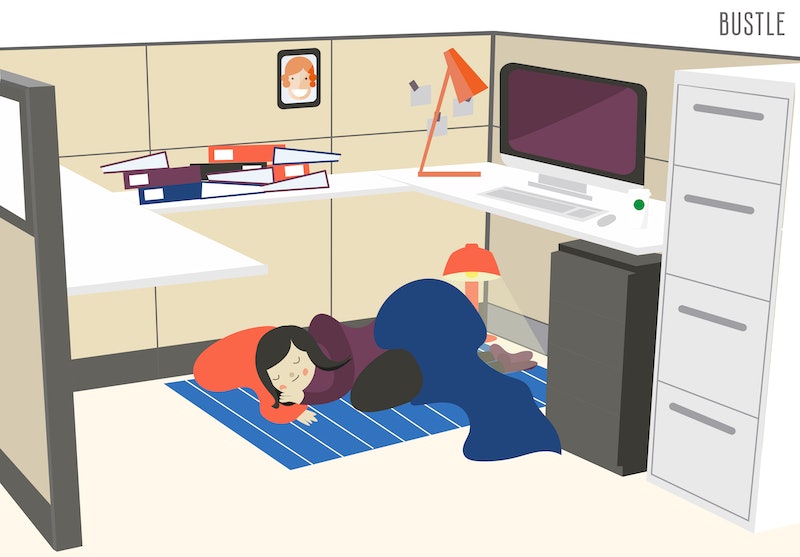 Family, friends, money, professional accomplishments, the elusive vaginal orgasm — none of these things are anywhere near as satisfying or as gratifying as a well-executed nap during the day. Naps aren't just enticing because sleep feels better than any drug in existence and your mother's love combined — Americans are chronically sleep deprived, with one third of us regularly getting fewer than seven hours of sleep a night; but recent research has shown that taking a 10-minute nap can fight the effects of an entire night of poor sleep. Plus, new studies have shown that napping helps us absorb information, with folks who had just taken a nap performing five times better on a memory test than those who hadn't. So naps are pretty much a public good, right? You'd think we'd have dedicated nap spots in the park, and public transit ads begging us to stop whatever we're doing and take a nap — for our own good as well as the good of society.

But despite all the hard evidence, our society remains a nap-adverse one. The New York City police department has a (probably justified) intricate system of fines and punishments in place to prevent officers from napping during their shifts (a practice known as "cooping"); many of the large and notable corporations that installed "nap pods" for on-the-job power-napping in the past few years have backpedaled, claiming that workplace napping lowers productivity. Naps are seen as the province of children and the elderly; for anyone else, napping is still seen as slacking.

We need to fight this destructive line of thinking the only way we can: by napping everywhere we can, in every place we can, until the reigning anti-nap-ocracy gives in to our demands. To aid in this goal, we've hand-selected nine of the best places to grab a nap during the day, whether you're working, commuting, or just shopping for an armoire. Nap freely, nap often, nap proud!

Your work place is so lousy with hot-spot nap destinations, they should probably just call it "nap" instead of"work"? Right? No? Fine. But every other workplace nap location pales in comparison to the under-desk nap. If you have your own office, or a cubicle with a large desk in a semi-secluded location, and you are not taking under-desk naps, you are basically wasting your entire life. What could you possibly be doing above your desk that is more important than relaxing in the soft, velvety industrial carpeting below, and staring contentedly at all the gum that generations of other office workers have stuck to the underside of your desk?

And the best part about under-desk naps is that you can personalize them — whether you're inclined to just rest your head on a wadded-up sweatshirt, or if you've brought your own pillow and soft lighting from home, an under-desk nap is a chance to reflect your tastes and sense of self to the world (the part of the world that is under your desk, anyway).

I hear you saying,"But I work in one of those open plan offices where the only private spaces are the supply closet and the can! Where am I supposed to nap???" Young lady, you just answered your own question. No one ever goes into the supply closet because it's just full of weird crap that people weren't sure about throwing out. So find a comfortable spot between the boxes of quarterly financial reports from 1996 and the office Christmas decorations, and go to nap town. You'll be able to rest easy, confident in the knowledge that anyone who interrupts your slumber was only coming in to have sex or take an embarrassing phone call from their gynecologist.

If you're a napper looking for comfort, but you also want adventure, nothing beats a snooze down in ol' Sub-Basement 3! From the flickering overhead lights to the weird rust-colored stains that cover almost all of the walls, a sub-basement nap combines all the fun of napping with the thrill of an amusement park ride based on the Saw movie franchise. And you're almost entirely guaranteed that you won't be interrupted, because no one goes down here. Actually, I thought this building only had two sub-basements...and what's that rattling noise?....oh my god, it's getting closer! Kidding, kidding! You seem really over-emotional, I think you need to nap more.

Napping During Your Commute!

The ideal place to sleep during your commute is, of course, in the passenger seat of a car that someone else is driving. They get to use the HOV lane, you get to sleep for an extra 20 minutes, everyone wins.

For those of us not lucky enough to have a carpool buddy (or those of us who have scared off our carpool buddy due to our copious in-car nap-farting), the crosstown bus offers a viable alternative. For this to work, scout out a bus route that begins near your house, so that you can be guaranteed to grab a wall-adjacent seat. Plant yourself down, close your eyes, and don't open them again until everyone is getting off the bus.

As an added bonus, there's a chance that people might look at your closed eyes and slackened demeanor, think you're a corpse and decline to sit next to you, giving the entire experience a luxury feel. Hey, is this a bus or the exclusive lounge area on a millionaire's private jet? I can hardly tell the difference!

Don't take a subway nap if you're particularly attached to maintaining ownership of your wallet/ iPod/ kidneys. Sorry! Maybe you could take the subway to the crosstown bus, and then go nap there.

Napping On The Town!

Most people think that the only place to nap during a party is in the bedroom where they're keeping the coats, but they're a long way off. The coat room nap is riddled with risks — not only might you end up sleeping with your face buried in someone's soiled Northface parka, but the odds are also high that your friends will think that you've left and leave without you, sentencing you to wake up alone at the party's end with the host that you only sort of know (Kevin? Kyle...Kpeter?) looming over you.

Is there anything quite so refreshing as the movie theater nap? The dim lighting, comfortable seats, and heavy pre-nap consumption of carbs make this one a classic for a reason. But when looking for your best movie nap, don't just pick whatever film is showing next; you might accidentally find yourself in Transformers 11, and unable to get any shut-eye due to the constant sounds of robots setting other robots on fire.

Instead, try a quiet art film, ideally one in a language that you don't speak. Or, best of all, go for a film where there's no talking at all! I had one of the best naps of my life during a screening of Bjork's Drawing Restraint 9 , a two hour long, almost dialogue-free movie that is either about love or whaling vessels — I'll never know! As an added bonus, quiet arty movies are often really long, which will give you maximum bang for your nap bucks.

As Barnes and Noble and their cushy, judgement-free, nap-ready chairs become fewer and farther between, grabbing a decent nap while shopping has become more difficult. But that doesn't mean that it's impossible. For your best crack at uninterrupted napping, try a large department store. Every department will have some cushy chairs for the folks being dragged along on shopping expeditions — but it's your job to find the chairs in the least-popular department, and claim them as your own nap pods.

Is your special chair in the engraved wedding stationary department? Is it the weird creepy wig department, which kind of seems like it has been unused since 1983? I personally have had great luck in the labyrinth furniture section of a huge department store on a weekday, where none of the sales personnel caught me napping — or, if they did, they were too bored to do anything about it (but not bored enough to draw a penis on my forehead. Thanks, guys!)

More like this
An Honest Review Of The TikTok-Famous WalkingPad
By Kaitlyn Wylde
Your Home Could Seem So Much More Expensive If You Tried Any Of These Cheap Tricks
By Dena Ogden and Sara Brown-Rigoli
The Best Ways To Get Rid Of & Prevent Red Bumps From Shaving, According To Dermatologists
By Madison Barber
I Tried Type:A Deodorant — & Honestly, It’s The Holy Grail Of Aluminum-Free Deodorant
By Kate Miller
Get Even More From Bustle — Sign Up For The Newsletter