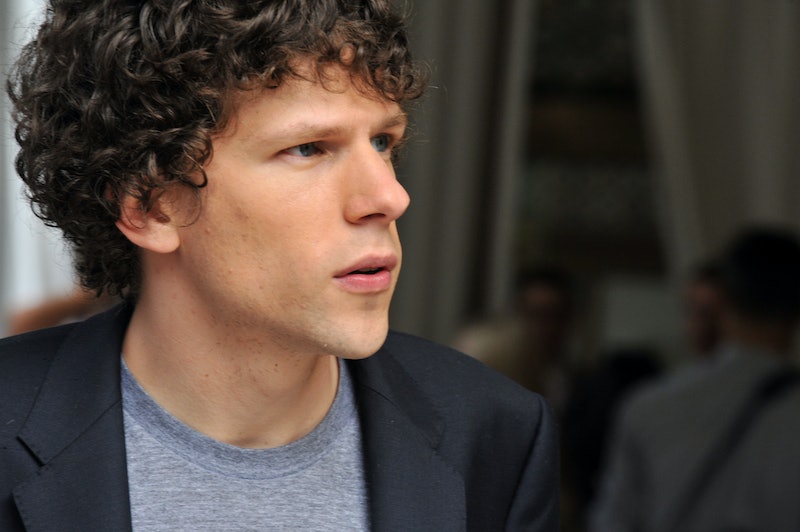 Earlier today, the first photo of Jesse Eisenberg as Lex Luthor in the upcoming movie Batman v. Superman: Dawn of Justice, which is due out in 2016 was revealed. As Lex Luthor, he'll be playing Superman's nemesis, and, with one look at the photo, that's all the Internet needed to know before they freaked. The eff. Out. The photo was of Eisenberg staring straight into the camera with a very intense look on his face, bald as the day he was born. (That's assuming he was born bald; IDK because his mom wouldn't return any of my calls). We've already experienced the intense backlash — or batlash — that accompanied the announcement of Ben Affleck playing Batman in the same film, so we should've been ready for this, but I was still surprised by the response.

Some people seem to think that Eisenberg was a pretty inspired choice for the scheming villain Luthor, but others can't get their brains past the fact that he's the scrawny little nerd in movies like Social Network and Zombieland, and they can't see him breaking out of that box. The vitriol isn't nearly as harsh as it was when Affleck was cast, but I gotta say, it's just as amusing, so take a look at ten of the funniest Twitter responses to today's announcement.

I dunno, I'm pretty convinced that I would love that movie.

Had to sneak this in even though it's not outright funny, because it's the sentiment I agree with.

Was wondering how long we could keep that a secret.

This suggestion comes highly recommended. By me.