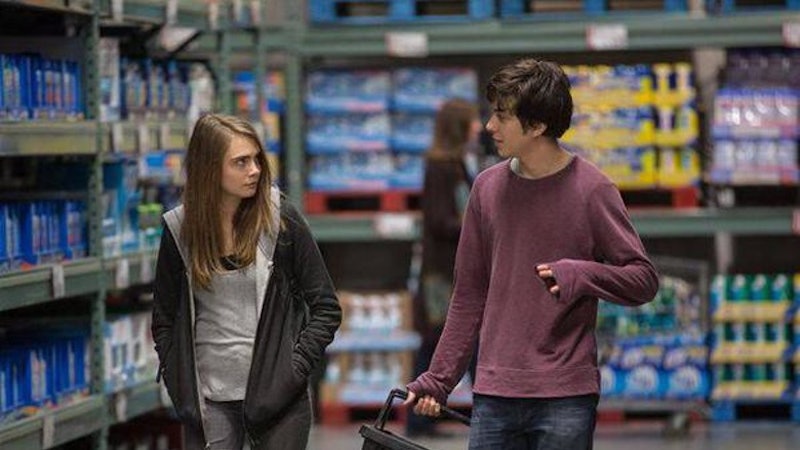 Ever since The Fault in Our Stars hit theaters, causing us to sob uncontrollably and realize Ansel Elgort as our ultimate imaginary boyfriend, John Green enthusiasts have been anxiously anticipating his latest novel-to-screen adaptation, Paper Towns . While July 24 is months away, we got to see a first look at Nat Wolff and Cara Delevingne as Quentin and Margo when the trailer hit the interwebs last week. Though the trailer touches on it briefly, the uninitiated are left wondering: What's a paper town? And what does it have to do with these high school seniors and their adventures? "A paper town is a fake town created by map makers created to protect their copyright," says John Green.

"Map makers put fake streets, fake towns, and fake bridges in their maps, so if they see those same fake places on someone else's map, they'll know that they've been robbed," he explains. "This has been going on for centuries, and it happens even now. Google maps and Apple maps have lots of paper streets and paper towns. Google maps had a famous paper town called Argleton until it was discovered."

So how does this relate to his novel? Here's why, but warning — spoilers to follow. On his website, Green writes, "It is through this that he eventually finds Agloe, a town that was fake but then made real by virtue of having been put on a map, and in doing so finds Margo. Basically, I wanted a different definition of 'paper towns' for each section of the book, each representing a different way of his imagining Margo."

Well there you have it! Watch (or rewatch) the trailer for Paper Towns, out July 24, below: