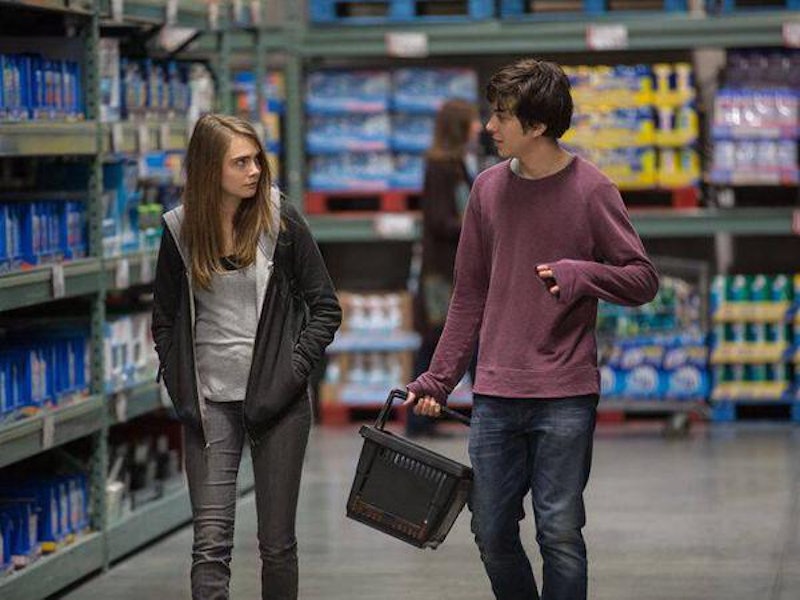 Although there've only been two film adaptations of John Green novels to date, I'm beginning to notice a trend. The books they're based on, the movies they turn out to be (or in Paper Towns ' case, the movie I think it'll turn out to be) are great, but their trailers? Not so much. It's not the acting, or the editing, or the choice in music — what bugs me about these trailers is that they don't represent the movies that are to come. In the preview for The Fault in Our Stars , Gus was shown only through his pretentious, eye roll-worthy facade, with no hint at the reason he hid himself through metaphors and quotes about oblivion. And in the trailer for Paper Towns , released on Thursday, Margo appears not as the complex, troubled girl she truly is, but as the manic pixie dream girl of a teenage boy's dream.

In the Towns trailer, Margo (Cara Delevingne) is introduced as Quentin's (Nat Wolff) "miracle" of a next-door neighbor, a gorgeous, exciting, and far out-of-his-league teenage girl. She loves mysteries, always has a plan, and finds nothing weird about jumping through a guy's window and spray painting her initials on strangers' living room walls. In Q's eyes, she's perfect, an enigmatic fantasy of a girl who, during a spontaneous night enacting revenge, convinces him that he's head over heels in love.

And in the books, it's exactly the same. Q bonds with Margo, falls deeply for her, and puts her on a "manic pixie dream girl" pedestal familiar to characters in many stories of the early 2000s. But here's the key difference: while the book goes on to explain that Margo is far more than just a fantasy of Q's imagination, the trailer doesn't. Even when Margo disappears and Q sets out on a road trip to find her, she's never seen as more than her facade. She's shown to be mysterious, impulsive, endlessly watchable — but not deep, not complex, not anything but whatever's seen through Q's eyes. She's a manic pixie dream girl, and nothing more.

Except that she's not. The point of John Green's book is that while Q may believe that Margo exists just for him to save, he quickly finds out that that's far from the truth. This is no spoiler; at the very beginning of Q's search, he realizes that Margo is far more troubled than he originally knew. He speaks to her parents, reads her messages, and talks to her friends, learning that the Margo he created for himself was nothing like the Margo who actually existed. The climatic events at the book's end only emphasize the character development that's already taken place.

So it wouldn't be out of the question for the Paper Towns trailer to have given more depth to Margo's character than it did. It didn't have to be much; I get that no movie is going to show the entire development of its lead character in its trailer, and that the most important reveals are meant to be saved for the actual film. Still, a few glimpses into Margo's true self, or an acknowledgment from Q that he'd turned into his neighbor a fantasy, wouldn't have taken anything away from the movie to come. They would only have added a level of depth to the trailer that it currently lacks, showing that both Q and Margo — but especially Margo — are more than just cardboard cutouts of indie movie teens.

I have faith in Paper Towns. The trailer may have been lacking, but the movie is directed and written by people with track records I admire, and John Green seems as passionate about his latest project as he was with The Fault in Our Stars. I want people to see this movie, as the message it spreads — that people, and especially young women, are not just troubled souls for boys to swoop in and save — is important and, at least in the book, movingly told. Hopefully, enough people who saw the trailer also read the book, and know that there's more to Margo than her depiction in the clip. And for those who haven't, I imagine that the appeal of a John Green adaptation overrides any criticisms for the trailer they might have, if they even have any; perhaps the flattening of Margo's character was only something that a book fan like myself could've noticed.

Still, I just wish the makers of the trailer had chosen to give Margo the depth she has in the book, rather than reduce her to a stereotype of a character that's long since worn out its welcome. There's so much more to her person than what Q imagines her to be, and it would only have made the movie stronger, not weaker, if the trailer had given viewers a hint at what lay underneath the fantasy. Margo could've been a compellingly complex girl with a personality full of complicated layers; instead, the way she is now, she's as flat as one of her beloved paper towns.