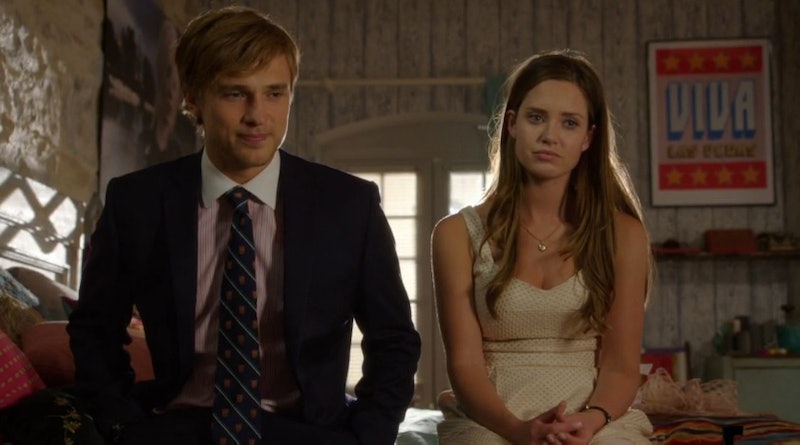 With just two episodes under its belt, E!'s The Royals is proving itself to be one of the most intriguing shows on TV right now. There's scandal, budding romance, British accents, and just about everything else you could ever want in a good TV drama. However, while everyone's been focusing on the myriad affairs and scandals that are brewing, one question has been plaguing me since the beginning: How did Ophelia's mother die?

For someone who's existence (not even her name) has come up so frequently in just two episodes, we know shockingly little about her. We know all about American Ophelia and her father, the royal family's Head of Security. We learned that Ophelia's father was initially hesitant about Ophelia's growing relationship with Prince Liam because Ophelia's mother death was the direct result of growing close to the royal family. We know that Ophelia's father didn't handle his wife's death well, even though he stayed on to help protect the family. And, finally, I suppose we can assume that Ophelia's mother was American — why else would she grow up in the states and have an American accent? But in terms of detail about Ophelia's mother's life, we know nothing.

I can't help but wonder if this death is more than just something to add to Ophelia's background as a character, though. Could Ophelia's mother's death be a plot point that'll come back into play later on in the show? It might be a bit too early to tell, but it's never too early to theorize about what happened to her. Here are some of the possibilities:

She Was Killed In The Line Of Duty

This is the most innocuous choice. We still don't know what exactly it was that Ophelia's mother did for the royal family—just that it was enough to get her close to them. It's always possible that she worked as an advisor or security detail, and died protecting someone?

She Was Having An Affair With The King

The King seems very interested in making sure that Prince Liam has a chance with Ophelia, or a chance for love at all, really. Maybe that's because he found love with Ophelia's mother that someone (the Queen, perhaps?) found threatening in some way, and she was killed to keep the affair quiet.

She Knew About The Queen's Affair

We still know nothing about the Queen's boyfriend: This Captain Lacey character. All we know is that he was a military man — maybe Ophelia's mom found out about the affair, and the Queen had Lacey kill her before she could tell anyone.

She Got In Deep With Cyrus

Doing what, I know not. But this guy is just nefarious douche-canoe, so I'd imagine getting involved with him in any capacity wouldn't end well.

She Was Mistaken For Someone Else

We don't know what Ophelia's mother looks like, but I do think that Ophelia bears a slight resemblance to the Queen. This could mean that Ophelia's mom looks like the Queen as well. I get the sense that the Queen makes a lot of enemies, so maybe Ophelia's mother's death was really just a botched attempt on the Queen's life. It wouldn't be that out of the question for someone to have been plotting to assassinate a member of the royal family (BTW, we still don't know how Prince Robert died — could that have been an assassination, too?).

Jasper Had Something To Do With It

OK, I need to know what Jasper's deal is. Like, why is he even there? He's torturing Princess Eleanor for seemingly no reason; he's American, but somehow managed to pass as someone from Shoreditch when he was hired as her security detail; and he seems rather adept at taking people out (he knocked that Olympic swimmer unconscious with barely a flip of the wrist). If Jasper is some kind of spy, maybe whoever he works for had something to do with Ophelia's mother's death. It's admittedly a bit of a stretch, but Jasper's got me seriously intrigued.

More like this
Yes, Joseph Quinn Is Actually Playing The Guitar In This Epic 'Stranger Things' Scene
By Alyssa Lapid
Vecna Officially Has A Fan In 'Stranger Things' Star Jamie Campbell Bower
By Alyssa Lapid
Jurnee Smollett’s Heart Is Healing
By Rebecca Carroll
Lizzo Proved She’s Team Jeremiah During Her ‘The Summer I Turned Pretty’ Review
By Grace Wehniainen
Get Even More From Bustle — Sign Up For The Newsletter