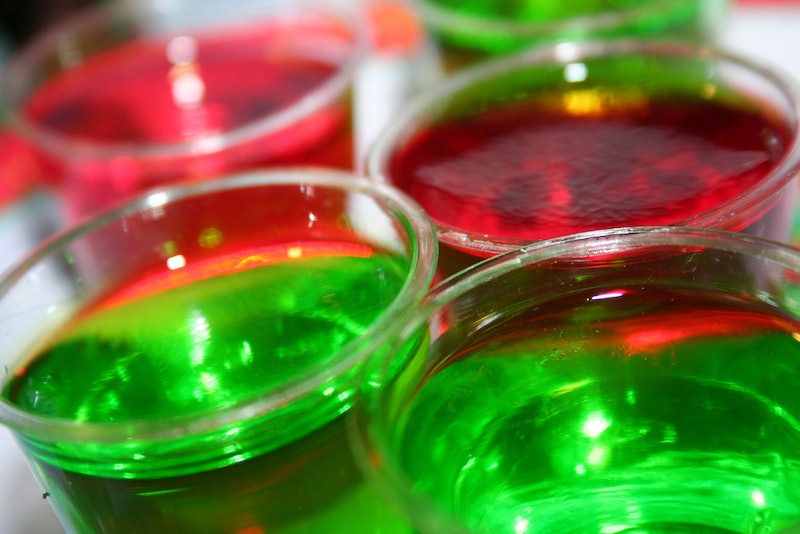 Jell-O shots aren't the most complicated things to make, but they can be kind of time consuming. But hey, I've good news for you, booze-laced gelatin enthusiasts: A machine that is essentially a Keurig for Jell-O shots now exists. It's called Jevo, and I've no doubt that it is going to be a total game changer for crazy college parties — and probably crazy non-college parties, too, if you're into that kind of thing. Why? Because it can make 20 Jell-O shots in 10 minutes. You heard me: 20 jiggly mouthfuls of booze… in just 10 minutes. Impressive, no?

Said Jevo creator Jeff Jetton to Upstart Business Journal, “The idea came up a few years ago really because there was no automation around making gelatin. We were sitting here looking at technology like Keurig and Soda Stream where you choose the flavor pod and the machine does the work, but there was nothing around the archaic, time consuming, and inconsistent process of making gelatin.” I would actually argue that the waiting is both the best and the worst part about making gelatin — I mean, yes, waiting sucks, but that's when the magic happens! — but maybe that's just me.

Anyhoo, two years later, Jetton's company, Food and Beverage Innovations, is up and running; they'll be presenting their invention at the 2015 Nightclub and Bar Show, which runs next week between March 30 and April 1. I'm not totally sure how the machine works — but maybe some things are better left unanswered. Besides, more intriguing, I think, are the flavors in which Jevo pods will be available: From what I can see on the website, the offerings move far beyond the simple strawberry and lime varieties that profligate at shindigs. There's pina colada, for example—and something mysterious called “Celebration Cake.” What exactly is celebration cake? Is it like birthday cake? Is that birthday vanilla? Chocolate? Something else? I must know!

Of course, the big downside to Jevo is the same one that the Keurig faces: The extreme amount of waste created by all those pods. Another strike is the fact that Jevo looks primarily like it's meant for bars and nightclubs, rather than private homes; as such, I'm kind of afraid to think about exactly how many used-up pods would add to the already growing environmental problem they pose every night. Not only that, but re-purposing them, while easy to do at home, isn't really an option for businesses.

Still, though — if the waste created by the pods wasn't such a problem, I wonder how many other things we could Keurig (if, y'know, “to Keurig” was a verb). What about…

Keurig technically already did this when they teamed up with Campbell's Soup last year; I still think it's a good idea, though, especially for folks who are so busy they keep forgetting to eat lunch.

The genius of this one? It would use recycled paper to make new paper. Note that I have no idea whether it's actually possible to accomplish this at home, simply, and in under a minute — but I can dream, right? And the best part is, no waste!

It's been a while since we've heard anything about 3D-printed makeup... but would anyone else kind of love to have a machine that could whip up a custom shade of lipstick in 10 seconds? Because I sure would.

On second thought, I don't need a special machine to make toys for my cats in a matter of seconds. All I have to do is open my latest Amazon package and give them the box. Neeeeeeeever mind.

How do you make a burrito come out of a pod? No idea. But I'm sure one day, someone will figure it out.

More like this
Starbucks Released New Menu Items For The Summer
By Emma Garza
A Beginner's Guide To Drinking Whiskey
By Alexis Morillo
How To Make The Watermelon, Feta, & Mint Salad Trending On TikTok
By Emma Garza
The 9 Best Easy-To-Use Coffee Makers
By Vanessa Spilios
Get Even More From Bustle — Sign Up For The Newsletter