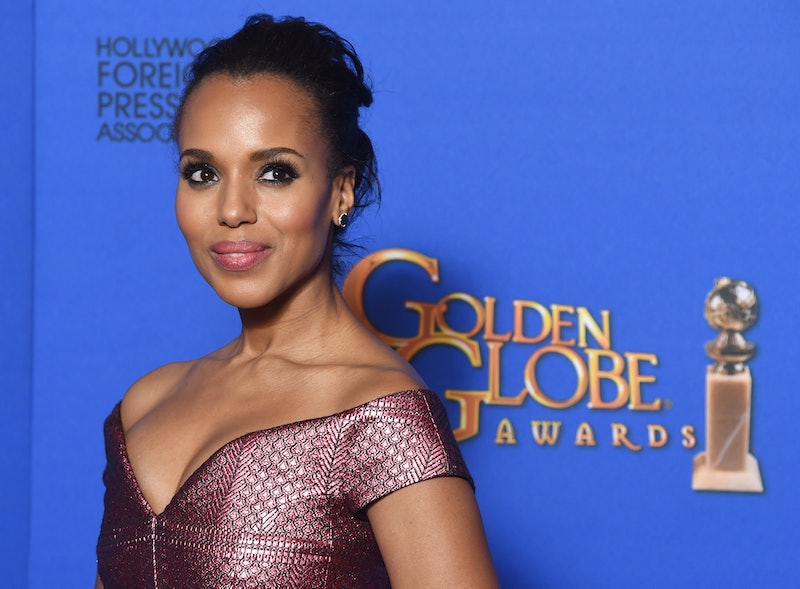 Kerry Washington is powerful, beautiful, and well-spoken, and apparently also really good at multi-tasking. As the cover girl for the newest issue of Net-A-Porter's The Edit, Kerry Washington confessed that she was so committed to live-tweeting Scandal that she even did so when she was going into the early stages of labor. "Every Thursday within three weeks of my [daughter Isabelle's] due date, I loaded up pre-tweets based on the episodes and what I would want to say. I tweeted in the very early stages of my labor. I figured that if I went completely silent on social media, then people would know I was in the hospital!" she said. Pretty clever ruse.

But Washington's interview isn't only about her diligent tweeting. The conversation turned, of course, to her alter-ego Olivia Pope from Shonda Rhimes' Scandal which is one of the most-watched shows on television. The actress said the true magic of Olivia Pope, for her, is that she is a relatable woman who wasn't meant to be a hero, but who women still look up to because of her flaws: "[Shonda] never wrote Olivia Pope to be a role model; she wrote her to be a human being, and part of what people identify with so much is that she is conflicted."

Washington is part of Shonda Rhimes' takeover of ABC, writing strong, leading women of color who are changing the age old mold of white faces on television. When Washington was nominated for Best Actress in a Leading Role for Scandal at the 2014 Emmys, she became the first black woman in 18 years to gain a nomination in that category. And she is a particular kind of celebrity. Often when actresses play such iconic roles — such as the fixer Olivia Pope — they become conflated. Washington's done a good job of drawing a line between herself and her character.

But that doesn't mean there are not similarities. Both Washington and Pope are constantly working to make their views heard and protect their agency. As Washington puts it, "I hope people remember [Olivia Pope] as a complicated, fully realized human being; she's not a stereotype and she's not an accessory. I think that it's important for women to know, in film and in TV and in life, that you can be the lead of your own story."

And it does not go forgotten that Olivia Pope, a black woman as a lawyer and a DC power-player, is definitely not a stereotype or an accessory. Maybe that's why Washington's story about live-tweeting is so great. Even though she's practically the poster girl for new, more diverse roles for women in primetime, she's still got time to tweet to her fans. That's another thing she shares with Olivia Pope. The fact that are both relatable and human.