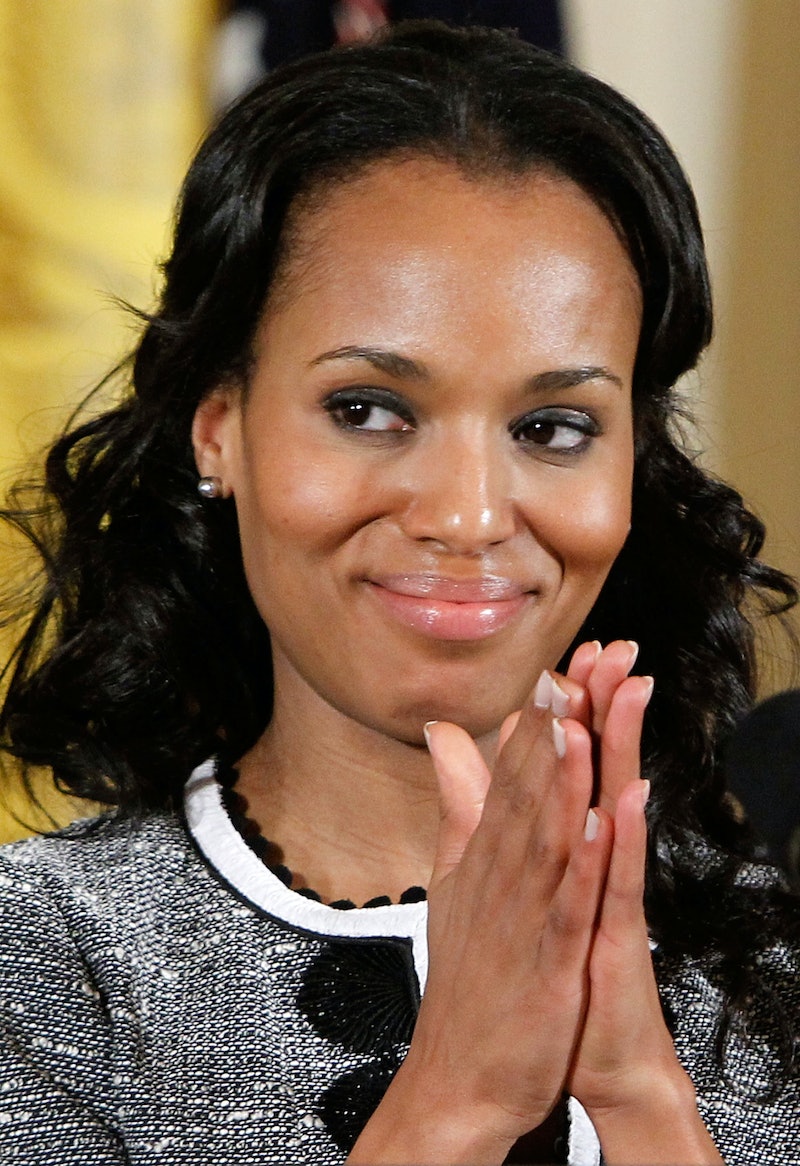 This should definitely be Kerry Washington's year at the Emmy Awards. On Monday night, Washington goes up against fellow actresses Claire Danes, Michelle Dockery, Lizzie Kaplan, Julianna Margulies and Robin Wright in the Emmys' Best Actress in a Drama category at the 66th Annual Primetime Emmy Awards. And while all of these women gave formidable and varied performances in their individual roles, the weight of Washington's potential win can't be ignored—never before has a black woman won a primetime Emmy for Best Actress.

In fact, Washington is only the black woman to be nominated in the Best Actress category since all the way back in 1995, when actress Cecily Tyson was nominated for her role on the one-season show Sweet Justice. That's a shameful 18 years ago. That's one year longer than teen witch Lorde has even been alive on this planet. Needless to say, then, that in all of Emmys history, NO black woman has ever won in the Lead Actress category—and how could they? They never get nominated. So while it's almost enough to watch the ceremony just to see what Washington is wearing tonight on the red carpet, it will be a damn shame if she doesn't win.

Across all of the major female awards at the Emmys this year—Lead and Supporting in both Drama and Comedy, respectively—Washington is the only woman of color. So should she win by default for diversity's sake? No, she should win for her groundbreaking role as Olivia Pope on Scandal AND for holding her own as a nuanced, strong black woman on a strikingly white primetime schedule.

Scandal comes from creator Shonda Rhimes, who dreamt up the inimitable, genius and emotional Pope, who is tough as nails but soft as room-temperature butter in the face of Fitz, the lazy president who seems not to have any job but to cause Olivia misery. The show is over-the-top, dark, unrealistic, and amazing, and so much of its success and charm center on Washington, who, albeit a radical, dramatic character (how does she have time to dress so well when she's out there fixin' all that D.C. trouble?), is somehow relatable.

And yes, the Emmys need to finally acknowledge the work of a black actress on a primetime show. The diversity of this year's nominees is still noticeably sparse, but that can attributed as much to the fact that there simply AREN'T shows on network television that offer enough women of color roles as can be attributed to the Emmys. But it's a vicious cycle: if the Emmys don't award the few women of color that do get nominated, how will doors ever open for more women of color to snag those prized, high-profile starring roles come next year?

We will see a new black woman in a major role this fall—Viola Davis is starring as a "morally ambiguous" law professor in How to Get Away with Murder which was created by none other than Scandal creator Shonda Rhimes. Rhimes is carving out a prominent place for black women on television in compelling, dynamic roles, and the award to Washington on Monday night would not only be a deserved recognition of Washington's talent but a nod to the success of a show created by a black woman. It's high time the Emmys gave due credit to diversity. And if they don't...

More like this
Beyoncé Is The First Woman To Have A No. 1 Album Since Adele Did Almost A Year Ago
By Radhika Menon
Beyoncé & Madonna’s “Break My Soul” Remix Honors A Group Of Black Icons
By Stephanie Topacio Long
'A League Of Their Own' Star Abbi Jacobson Is Engaged To Jodi Balfour
By Jake Viswanath
Lisa Kudrow Explained How Her Body Image Changed While Filming 'Friends'
By Grace Wehniainen
Get Even More From Bustle — Sign Up For The Newsletter