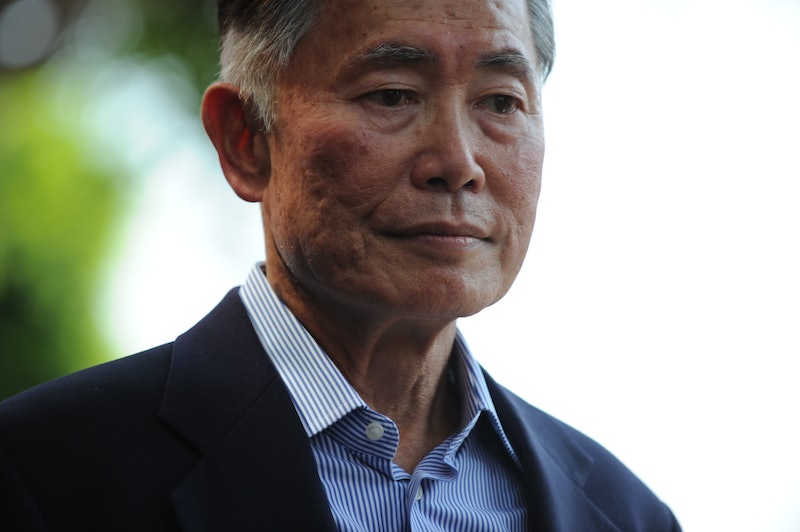 Well now you've gone and done it, Indiana Gov. Mike Pence, you went and ticked off the King of the Internet. On Thursday, Pence signed into Indiana law a "religious freedom" bill that allows businesses to reject customers for religious reasons, The New York Times reported, which most view as a way for businesses to refuse to provide service to LGBT customers. So now, Star Trek star, outspoken LGBT rights activist, and social media celebrity George Takei is calling for a boycott of Indiana, The Indianapolis Star reported.

Takei, who came out as gay in 2005, and has been with his now-husband, Brad, for almost three decades, did what he does in glorious fashion on Thursday and took to his social media accounts to condemn the new law and call for others to join him in boycotting the Hoosier State. Takei pulled no punches in a statement on his Facebook page.

The notion that this bill was not driven by animus against our community is belied by the record and frankly insulting. I will join many in demanding that socially responsible companies withdraw their business, conferences and support from his state and that LGBTs and our friends and supporters refuse to visit or do business with Indiana.

Pence, for his part, explained in a statement that "many people of faith feel their religious liberty is under attack by government action," The Times reported, which seemed a thinly-veiled reference to Indiana legalizing same-sex marriage in 2014.

Even before Takei took to the Internet to protest the Indiana government's action — it wasn't just Pence, but both houses of the GOP-controlled Indiana legislature that pushed the bill forward — the move was already costing the state money. The giant gaming convention Gen Con threatened to leave Indiana if the law passed, which could cost the state $50 million. Salesforce CEO Marc Benioff said his company will not do business in Indiana, and even the Indianapolis Chamber of Commerce called the new law "entirely unnecessary," The Times reported.

Indianapolis is the site of this weekend's Final Four in NCAA men's basketball, and the NCAA expressed its concerns about the new law, The Washington Post reported. So Takei is in good, if varied, company in his opposition to the new law (if you are more of a Star Trek fan, you might say he set his phaser to stun. Sorry, I went there). It's hard to determine what benefit the law will have for the state of Indiana and its businesses, but to paraphrase Takei's old show, it seems like the state is boldly going where no one has gone before. Hopefully, more states don't follow Indiana into the abyss.

More like this
Jujubee’s Humble Reminder
By Sam Ramsden
The Most Powerful Photos From The Weekend’s Abortion Rights Protests
By Melanie Mignucci
5 Ways To Stand In Solidarity With Women In America From The UK
By Sophie McEvoy
How To Fight For Reproductive Rights, Based On How Much Time You Have
By Courtney Young
Get Even More From Bustle — Sign Up For The Newsletter