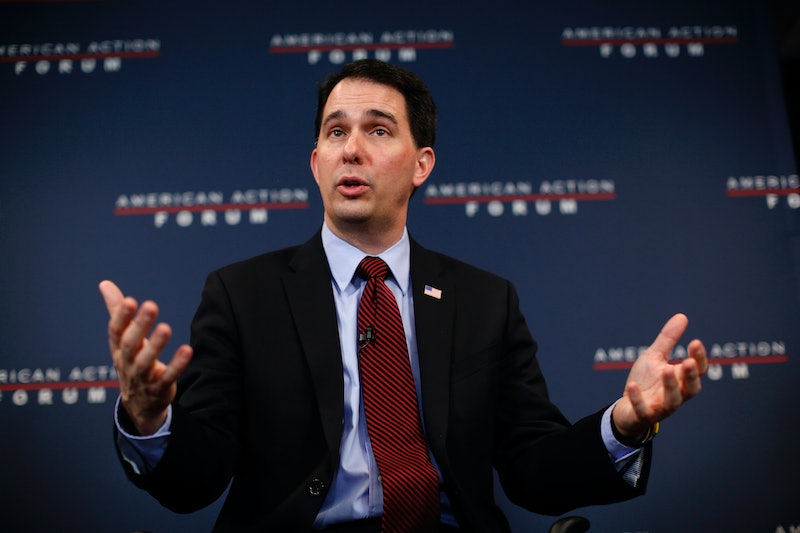 To give amnesty, or not to give amnesty? That's the question for Scott Walker on immigration, and the answer could alter whether he'll get the Republican nomination for 2016. In early March, the Wisconsin governor attended a private dinner in New Hampshire and Walker flipped his immigration position, according to fellow diners in a Friday Wall Street Journal report:

Now, this is a bit of a contrast to when Walker outlined his immigration policy during an ABC News interview in January.

I think we need to enforce the legal system. I'm not for amnesty, I'm not an advocate of the plans that have been pushed here in Washington

In an emailed statement to Reuters, the governor's spokeswoman Kirsten Kukowski said that reports any Walker immigration flip-flop were "erroneous":

Governor Walker has been very clear that he does not support amnesty and believes that border security must be established and the rule of law must be followed.

So we're seeing a lot of back and forth, and there isn't a clear indication of what Walker's position is, exactly. But, if the Wall Street Journal report is true, this could actually help Walker in the Republican primary. There's a lot of divide over immigration among the GOP base, but Walker's new position might aid him in edging out Jeb Bush — the two are comparable on a lot of policy issues, and the previous split over immigration might have stopped some Bush supporters from joining the Walker camp. It could also help Walker attract more independent voters in the general election, should he win the nomination.

But in terms of Republican support, it could also hurt him. Marco Rubio's more lenient position on immigration prompted heckling during his book tour. The tea party faction is largely opposed to amnesty, and Walker's recent comments could further disillusion that already skeptical branch of the party.

It's not necessarily a bad move to change policy positions. But Walker's definitely going to need clear up what his policy stance on immigration is — or else, he could lose legitimacy and be much ado about nothing in the presidential race.