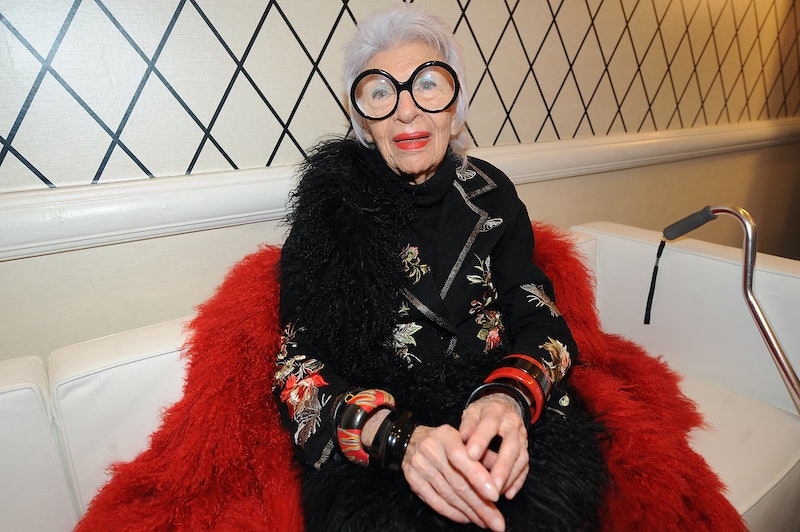 Sure, fashion's favorite nonagenarian, style icon Iris Apfel, may be a happily married woman, but that doesn't mean a girl can't still get her flirt on! An exclusive clip on Paper Magazine from the forthcoming documentary Iri s, directed by the late Albert Maysles, shows Apfel chatting up Kanye West despite the fact that he's, you know, less than half her age.

The clip opens with Apfel moving amongst the fashionable hordes looking like a peacock cutting through a flock of pigeons, per usual. After receiving an abundance of compliments from some of the industry's biggest designers, including Jenna Lyons and Alexander Wang, Apfel stops West in a hallway to inform him that she's a big fan of his work. I can't lie, when I got to that moment in the video, my heart definitely skipped a beat. It was like every dream I've ever had collided in to one perfect moment that's way, way too good to be true. If finding out how that conversation ends isn't enough of a reason to see the documentary when it comes out on April 29, Iris's endless array of pitch perfect ensembles should do the trick.

In the meantime, Kim Kardashian might want to start working on cultivating a more eccentric look because, I have to say, after watching these two interact, Kanye and Iris might be the fashion dream couple we're been waiting for. Here's five reasons Kanye and Iris could be a sartorial romance for the ages.

1. Kanye loves vintage fashion and art history (and Iris owns tons of it)

Kanye prides himself on his in depth understanding of the history of both fashion and art. Not wanting to seem ill-informed in either arena, the rapper has plunged himself into both fields, speaking with experts and reading as much as he can. Kim has even credited him with her new found love of vintage designer fashions. Naturally, him and Iris would get along swimmingly. Not only does she own some of the greatest pieces of archival fashion, but you know all those big moments in art and history Kanye's been learning about in books? Iris experienced many first hand.

2. Kanye is perpetually searching for his next muse

As Kanye's aesthetic and personality have evolved over time, so have his relationships. The musician is clearly inspired by the people he surrounds himself with, and his significant other of the moment always seemed to serve as his ultimate muse. Sure, Kimye might be endgame, but Iris was born to muse.

After Kanye launched his Yeezy Season 1 collection for Adidas, he was very vocal about how difficult it's been for him to break into the industry and be taken seriously, both by audiences and the establishment's elite. Apfel, on the other hand, has always been an icon and designer favorite. She's constantly seated front row and photographed everywhere she goes. Iris just might be the key Kanye's been looking for that could finally unlock the door to fashion's inner sanctum.

4. Iris could teach Kanye about the joys of fashionable maximalism

Kanye is famed for his aesthetic minimalism. It comes across in everything he does whether it's his style, his home, his taste in art, or even his music. But Iris is the queen of all things maximalist and could teach the rapper a thing or two about pushing his ensembles to the uppermost limits. While Kanye tends to be a jeans and tee kind of guy, Iris has never met a funky accessory she didn't like. I can imagine these two finding an impressive stylistic middle ground that would have hordes of fashionistas following their every move.

Just look at this woman. She has a bigger and better collection of chains than any rapper at the top of their game. Not only that, but she has thousands of wise and hilarious quips that deserve to be set to a thumping trap beat. Plus, I'd rather see a video girl rocking a muumuu over one in a bikini any day.

But seriously, I am way too invested in this relationship. If you're looking for me, I'll be over at Change.org petitioning to make this power couple happen in real life. That's how petitions work, right?

More like this
Kim K Is Putting Kanye’s Memorabilia — Like Grammys & Clothes — In A Vault
By Jake Viswanath
Julia Fox Says She Dated Kanye To “Distract Him” So He’d Leave Kim K Alone
By Jake Viswanath
Kanye Allegedly Showed Explicit Photos & Videos Of Kim K To Yeezy Employees
By Radhika Menon
Kim Kardashian On The Beauty Hack That “Changed My Life, My Skin, My Confidence”
By Taylor Jean Stephan
Get Even More From Bustle — Sign Up For The Newsletter