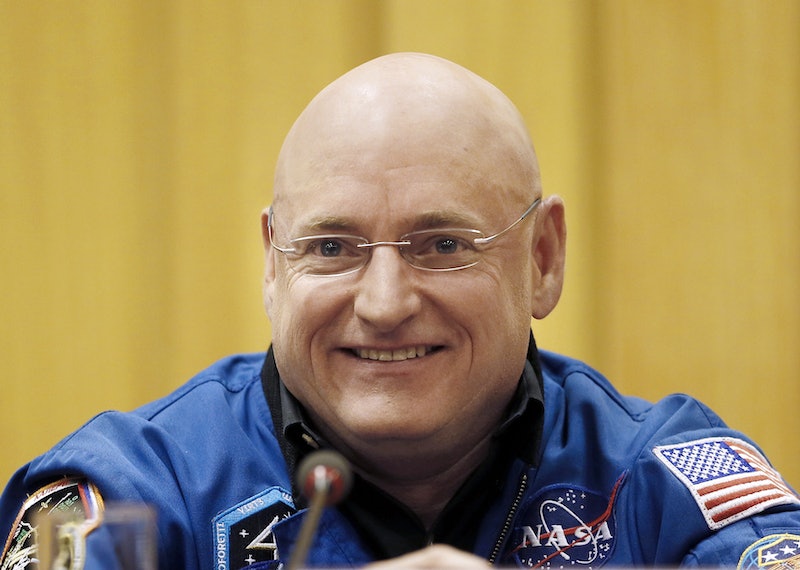 Two astronauts. Two spots in space. One set of twins. This is what Marc and Scott Kelly can expect for the next year. Friday marks the start of a momentous event in the history of space exploration: NASA is sending Scott to the International Space Station for a year. In other words, yeah, a whole year away from this planet. But Scott's excited about the space mission, telling media during a January briefing, "It's a lot of fun." He added that the ISS "is a magical place."

If successful, the trip will set the record for the longest continuous space travel. So what's the purpose of this space flight experiment — and what's this about his brother? Well, while Scott is traveling in space, his twin brother Mark will be staying here on Earth. NASA scientists will be monitoring him so that when the two brothers are reunited back on this planet, they can compare how long-term time in space alters the human body. Looking at genetically identical individuals makes this possible.

We're familiar with Mark, who's married to former congressmen Gabby Giffords. But who is his — until now — lesser-known brother Scott, the American astronaut spending an entire year in space while setting the record books?

He's Got Some Reservations

Kelly has spent six months in orbit before, and he told ABC News in an interview that knows that a year on this space mission will make him homesick:

. . . about four months, you start thinking, you know, there is a lot of stuff I miss on Earth. I feel like I have accomplished everything I need to, and I am sorta ready to go home.

He's hoping that comes about two-thirds of the way through.

Kelly has a girlfriend, Amiko Kauderer, who he'll be leaving behind for a year. She can't call him, but he can call her. She's not too bummed about the situation, telling ABC News:

For me it’s like the most romantic long-distance relationship ever.

That's a loving and supportive relationship, right there.

He Has A Space Travel Partner

Russian cosmonaut Mikhail Kornienko will be with him during the entire year-long duration of the space mission. For the first six months, the pair will also share a bunk with Gennady Padalka, another Russian cosmonaut.

During the mission, British singer and former star of The Phantom of the Opera Sarah Brightman will be visiting the space station as a tourist. The cost to go to space? A cool $20 million for 10 days.

Are the astronauts excited for their companion? Kelly told The Washington Post: “Never sang before. But I could try, right?” later adding, “It will be either all of us (singing with her) or none of us.”

More like this
The 8 Most Comfortable Boots For Walking All Day
By Wesley Salazar
The 5 Best Laptop Power Banks
By Vanessa Spilios
Craving The Beach? Here's Your Guide To A Solo Vacation In Turks & Caicos
By Alexis Morillo
The 7 Best Clear Backpacks That Are Both Stylish & Functional
By Jenny White
Get Even More From Bustle — Sign Up For The Newsletter