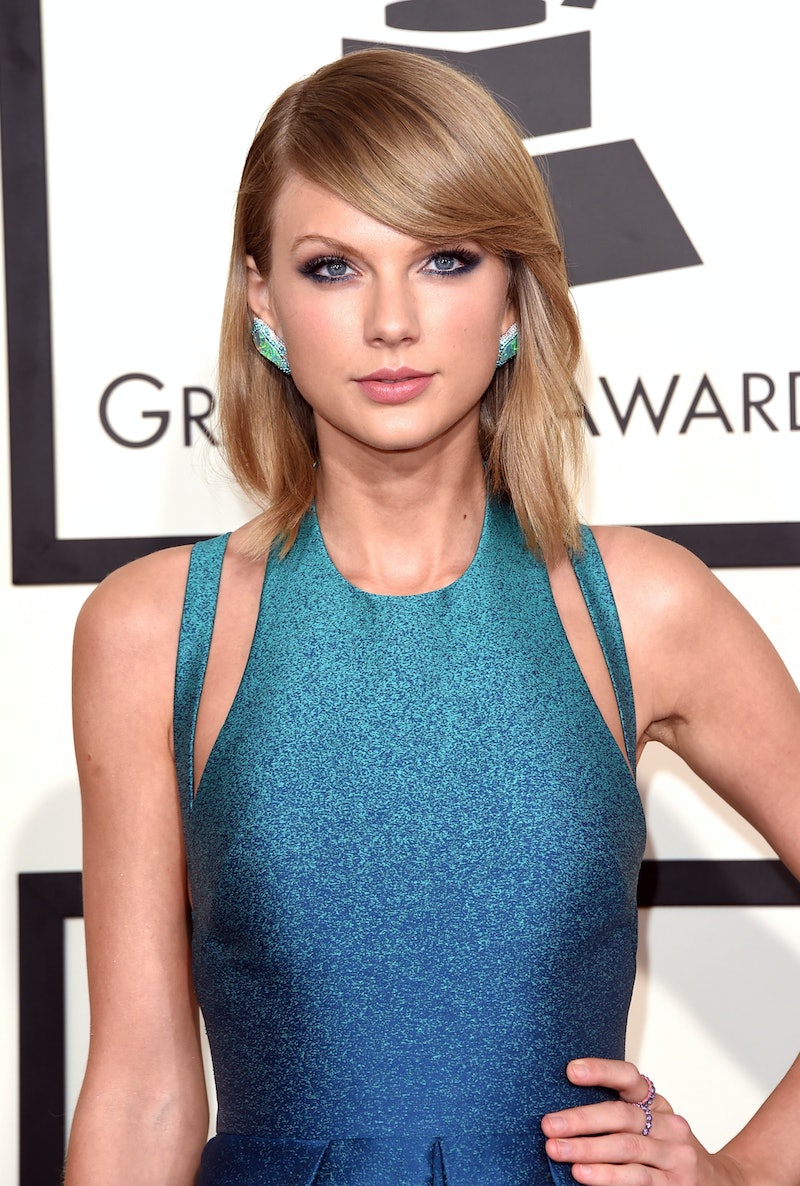 If there's one thing that Taylor Swift fans know for sure, it's not to get too attached to a guy she happens to be spotted with or rumored to be dating. More often than not, the man in question turns out to be a friend or a bodyguard or a reporter, the rumor shot down by an anonymous source or the singer herself. Yet it's hard not to believe that there isn't something going on between Swift and Calvin Harris, seeing as the two were spotted holding hands while at a concert Thursday night. Someone as media-hounded as Swift knows that you don't show PDA anywhere unless you're comfortable with it being captured by the epress, which means that there's a real possibility that she and the British DJ might actually be a real thing.

Which, if that's the case, is pretty great. Although Harris isn't a well-known celebrity like some of Swift's previous boyfriends, he's had some major successes of his own, and it's clear that he and the singer make a perfect match. Sure, there's a chance the dating rumors aren't true, but here's hoping they are, because a Swift-Harris coupling would actually be great. Here's why:

They Both Started Their Careers Early

As everyone knows, Swift's journey to stardom started when she was barely out of braces, submitting demos at 11 and writing her first song a year later. When her first album came out in 2006, she was just 16 years old. Harris, meanwhile, recorded his first demos at 15, and found success three years later when two of his songs were released as singles. His bigger hits didn't come until much later, but having decided to pursue his passion so early on is certainly something Swift can relate to well.

They've Both Feuded With Katy Perry

The feud between Swift and Perry has been well-publicized, but for those not familiar, here's the basics: in an interview, Swift revealed that Perry tried to steal many of her employees and ruin her tour, leading to the duo becoming "straight-up enemies" and Perry being the inspiration for "Bad Blood." Perry responded by insulting Swift on Twitter, and while nothing more on the matter has been said, it's clear the two are far from friends.

Harris and Perry, meanwhile, have their own bad history. Back in 2011, Harris was supposed to be the opening act for Perry on tour, but pulled out just a few days before the first date. His reasons? The singer's team "made it impossible" for him to perform. In a message to fans, Harris told them that they "would have been more disappointed seeing the show" than with him canceling. In response, Perry shot back at the DJ, saying that other opening acts had never had a problem with her requirements, and that "it's fine, I'm used to you canceling on me, it's become ur staple!"

They Both Really Love Jam

In 2009, Harris hosted a Youtube series called JAM TV, in which singers like Katy Perry (the irony) and Florence Welch tried to open pots of jam. Seriously. That's all they did. There was even a theme song: "It's f---ing JAM TV, he's opening some jam, JAM TV." All the videos except this first one have been deleted, but you get the idea.

Swift's own passion for jam isn't quite as... intense, but there's no question she likes the product. In 2013, Ed Sheeran posted a photo of a jar of jam Swift had gifted him, captioned with the now-famous, "I'm gonna let you finish but this is the best JAM OF ALL TIME." Who can say this isn't a match made in heaven?

They Have The Same Friends

Harris has worked alongside Ellie Goulding and HAIM, among other Swift mainstays, and it's likely the musicians hit it off. If he's gotten the seal of approval from the singer's closest friends, that's a huge step. Expect group outings and celebrity-filled Instagrams to be next.

He's Used To Her Fans

Swift herself has said that she doesn't know how to date someone anymore, because any sane person would have a hard time dealing with the amount of paparazzi and screaming fans she encounters on a daily basis. Although this is certainly true, Harris is no newcomer to the uproar around Swift. Both of them have performed at the fan-loved Jingle Bell, they've attended the same awards shows, and, just recently, he learned firsthand what it's like to be around Swift in a public place. If he hasn't been scared off yet, it's unlikely he ever will.