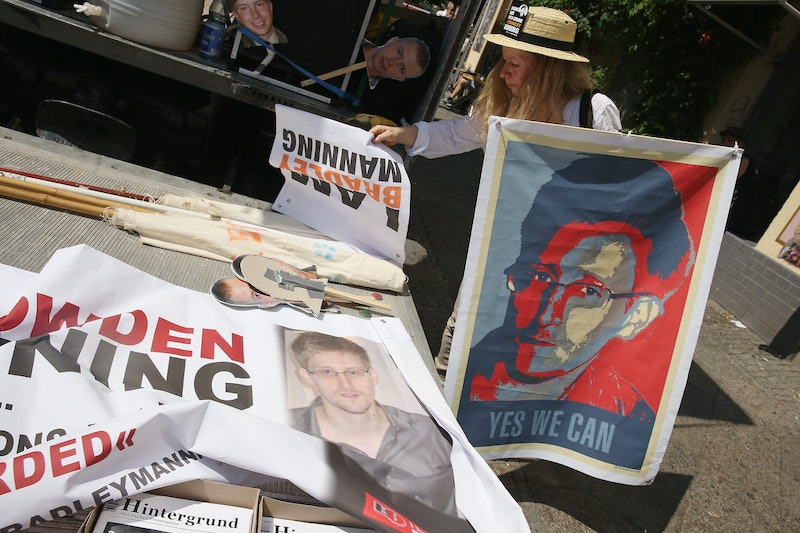 Just as U.S. Secretary of State John Kerry arrived in Paris to help negotiate the diplomatic hot-plate that is the Israeli-Palestinian conflict, another sticky diplomatic situation arose Monday when the French newspaper Le Monde revealed that the American National Security Agency had collected several million French telephone records over a month-long period. Already, the Foreign Minister Laurent Fabius has summoned the U.S. ambassador to the Foreign Ministry for an explanation. But it's probably Kerry who'll end up with some explaining to do.

According to Le Monde's report — based on files obtained by ex-government-and-now-temporary-Russian-asylum-holder Edward Snowden — the NSA swept up roughly 70.3 million telephone records in France over a 30-day period between December 10, 2012 and January 8, 2013. Other files, which dated to April 2013, also showed that the NSA had followed emails linked to Wanadoo (part of France Telecom) and Alcatel-Lucent, (the French-American telecom company).

“This sort of practice between partners that invades privacy is totally unacceptable and we have to make sure, very quickly, that this no longer happens,” French Foreign Minister Laurent Fabius said Monday.

And SMS messages weren't safe either — the documents indicated that certain keywords also triggered the NSA to collect millions of the texts of French citizens. The report pointed out that the documents showed that the security agency was clearly not just targeting terrorists, but businessmen and politicians as well.

"If an allied country spies on France, this is totally unacceptable," said Interior Minister Manuel Valls.

Of course, this isn't the first time that Snowden's leaks have painted an unflattering picture of American surveillance and caused uncomfortable rifts with other countries (let's not forget all that Putin-directed hate before Syria). When Brazil found out that the U.S. had been spying on its citizens, Brazilian President Dilma Rousseff was so angry that she cancelled a dinner with the White House, and publicly slammed the U.S. for “an unacceptable violation of Brazilian sovereignty."

The revelations come as Kerry arrives in Paris to begin his 3-nation European tour to discuss the Middle East. While in France, the Secretary of State is scheduled to meet the Arab League's Arab Peace Initiative Follow-up Committee to talk about the Israeli-Palestinian negotiations — but chances are his focus will be on fixing the U.S.'s own now-strained relations.

More like this
How To Follow The New Royal Family Social Media Accounts
By Sam Ramsden
Archie & Lilibet Are Eligible For Royal Titles — But There's A Catch
By Jake Viswanath
Prince Harry Explains Why He Feels Guilty For Meghan's Estrangement With Her Dad
By Jake Viswanath
Is Queen Elizabeth II Or The Royal Family In Netflix’s 'Harry & Meghan' Docuseries?
By Jake Viswanath
Get Even More From Bustle — Sign Up For The Newsletter