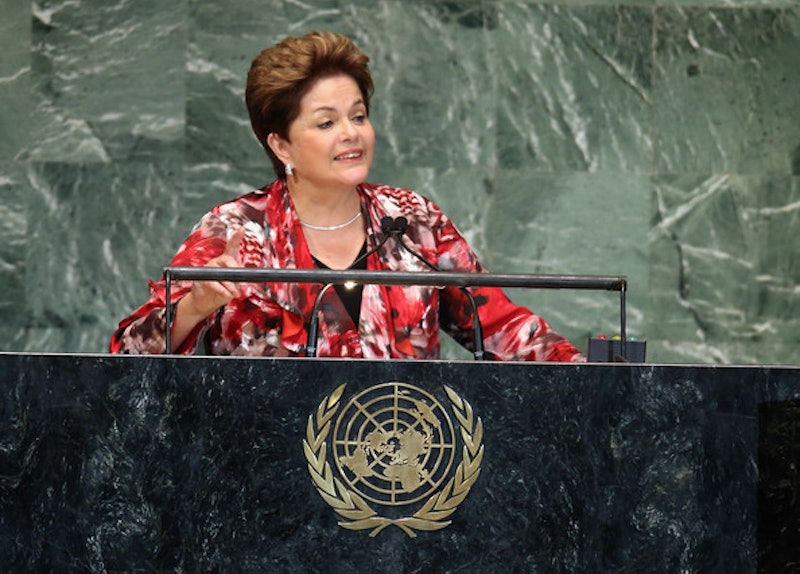 President Obama was the second speaker to take the stage at the United Nations General Assembly in New York today. As he did, he passed by Brazilian President Dilma Rousseff, who’d just used her opening speech to accuse the the U.S. of violating international law. Talk about an awkward beginning to a peace summit.

"Meddling in such a manner in the lives and affairs of other countries is a breach of international law and, as such, it is an affront to the principles that should otherwise govern relations among countries, especially among friendly nations," Rousseff said. “A country's sovereignty can never affirm itself to the detriment of another country's sovereignty."

Rousseff was referring to revelations, leaked by Edward Snowden, that the NSA secretly recorded her personal communications — including a phone conversation she had with Enrique Pena Nieto, then a candidate for President of Mexico (he ultimately won). The revelation came in addition to reports that the agency had also spied on Petrobas, Brazil’s state-controlled oil company.

After word leaked of these intrusions, Rousseff — along with the rest of the Brazilian government — was infuriated. The Brazilian Justice Minister called the actions “an unacceptable violation of Brazilian sovereignty,” and Rousseff canceled her attendance at a state dinner in Washington, despite last-minute pleading by Obama not to do so.

Rousseff isn’t the only Latin America leader displeased with Obama. On Thursday, Obama allegedly refused to let Venezuelan President Nicolas Maduro’s jet fly over Puerto Rico, which Caracas subsequently branded “an act of aggression.” The next day, largely in part to the Maduro episode, Bolivian President Evo Morales referred to the U.S. president as “a criminal,” and said that Bolivia is “preparing a lawsuit against Barack Obama to condemn him for crimes against humanity.”

In that light, Rousseff’s comments seem almost quaint. Obama was still en-route to the summit when she spoke, so it’s possible he hadn’t yet heard her speech when the two passed by each other on the way to the podium, but still, that must have been an uncomfortable ten seconds.