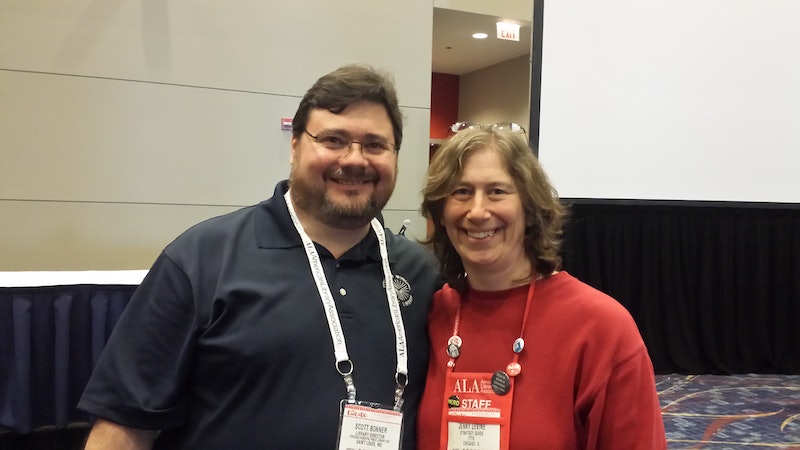 Hard times bring out the best in some rare people and they are rarely rewarded for it. This week, one man was. It has been announced that Ferguson Public Library director Scott Bonner has won the second Lemony Snicket Prize, awarded to noble librarians who faced adversity.

That adversity, of course, was the uproar that shook the foundations of Ferguson – but not its library. The shooting of Michael Brown on August 9, 2014 sparked riots in the streets, curfews and shutdowns. But Scott Bonner, the only librarian on staff, kept his library open. When schools closed, the Ferguson Public Library director took the kids and teachers, who had nowhere else to go, and organized educational programs for them there.

When the story about the brave librarian broke, almost 13,000 people sent more than $175,000 to keep the library going. Bonner used the donations, among other things, to stock up on books about diversity and the history of civil rights movement.

Bonner told Publishers Weekly he was just doing his job:

“I appreciate the heck out of people saying you're doing a great job, and every time I hear it I want to say thank you. At the same time, I think librarians that have dealt with things like Hurricane Katrina, or with earthquakes, and that kind of stuff, they have done a lot more than what we’re doing. We're just being a library.”

Lemony Snicket, also known as Daniel Handler, will present Bonner with his prizes on June 28 at the American Library Association Annual Conference & Exhibition in San Francisco. In addition to his title, he’ll receive $10,000 and a gift from Handler’s private collection.

Jacqueline Woodson, author of Brown Girl Dreaming, will present Bonner’s prizes alongside Handler. When she won the National Book Award for Young Adult Fiction last November, Handler joked about Woodson, an African-American, being allergic to watermelon.

More like this
24 History-Making Black Women You Probably Didn't Learn About In School
By Ayana Lage and JR Thorpe
Samantha Leach's 'The Elissas': See The Cover & Read An Exclusive Excerpt
By The Editors
Pamela Anderson Is Still A Hopeless Romantic
By Ilana Kaplan
Delia Cai’s Small-Town Romance Goes Beyond The Tropes
By Samantha Leach
Get Even More From Bustle — Sign Up For The Newsletter
From hair trends to relationship advice, our daily newsletter has everything you need to sound like a person who’s on TikTok, even if you aren’t.