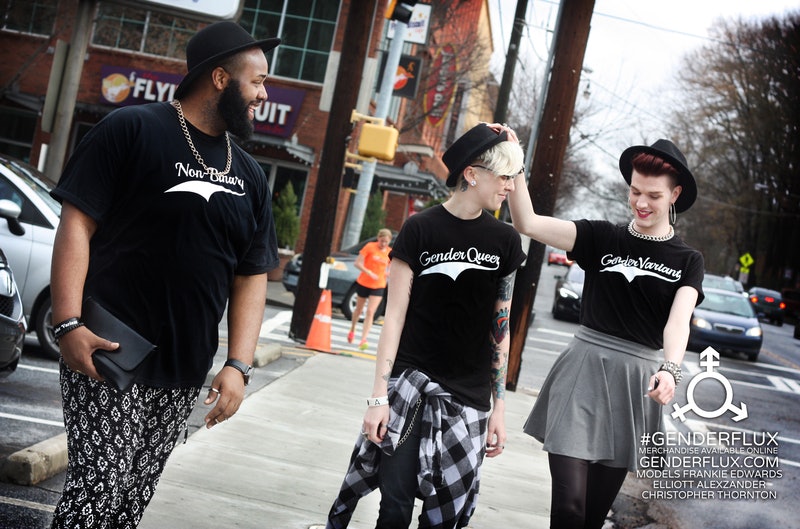 Androgynous fashion and androgynous models have been sweeping the runways, but while it seems disingenuous to say that androgyny is having its "big moment," this is a sign of something bigger. Accepting androgynous style as something that's not just women "borrowing from the boys" in boxy "menswear" cuts signifies that non-binary gender expression is becoming more visible and understood in the mainstream fashion world and contemporary culture. That's why the clothing line GenderFlux and its current crop of t-shirt styles is so important: They're helping people to visibly and plainly self-identify while increasing people's knowledge of different gender identities.

The line was founded and created by gender-fluid fashion blogger Elliott Alexzander who told Vocativ that the line came out of his and his team's own desires for more clothing to match their gender expressions. Their Kickstarter campaign for the brand resulted in a pre-order of 300 shirts over only 10 days, and the success led the brand to launch five new styles in January. Alexzander wants their line to be inclusive in all types of ways, so their designs are modeled by a diverse group of non-binary people with different body types and ethnicities, but all from the queer community in Atlanta. Meant to be more than a brand, so far the t-shirts and the conversations that they're starting are going according to Alexzander's plan.

Non-binary people are those who don't identify as falling into either of the genders that are most generally ascribed: male or female. Think about how many ways there are to be a person, and then think about the fact that we've all been taught that there are only two genders that we can identify or express ourselves as — and that's how we'll identify and express ourselves for the rest of our lives. Instead of identifying and/or presenting as one polar opposite or the other, people who identify as non-binary are those who dwell somewhere in between or outside of that spectrum. Identifying outside of this restrictive binary can be liberating for the folks who are self-identifying this way, but myths and misunderstandings about non-binary identities can cause stigma and discrimination against them. While hoping to expand to a full line of clothing, the company is currently selling shirts emblazoned with "Gender Variant," "Gender Queer," "Non-Binary," and GenderFlux's campaign logo — a blend of the male, female, and trans symbols.

Alexzander's next big fashion issue to tackle? Sizing. They want to make sure that everyone can fit their clothes and accommodate all body types — and not just by making clothing in bigger or smaller sizes and expecting them to fit all bodies in the same way. This challenge is something that mainstream fashion still struggles with, so I can't wait to see Alexzander and GenderFlux's take on a solution. While I'm all for getting more people in awesome clothes, perhaps the most important work this line is doing is creating space for conversations about what gender means and how we express it. “I want resources, creative outlets and tools to be available for the gender variant community,” Alexzander told Vocativ. “Fashion is just the beginning.”

More like this
Mrs. Wheeler Wore A Vagina Necklace In 'Stranger Things' Season 4
By Allie Fasanella
I Have Eyebrow Alopecia – & Microblading Gave Me My Confidence Back
By Jessica Morgan
Tess Holliday Wants The Metaverse To Be A Safe Space For Plus-Size People
By Dominique Norman
Lizzo Celebrates Juneteenth With Pan African Flag Dress
By Dominique Norman
Get Even More From Bustle — Sign Up For The Newsletter