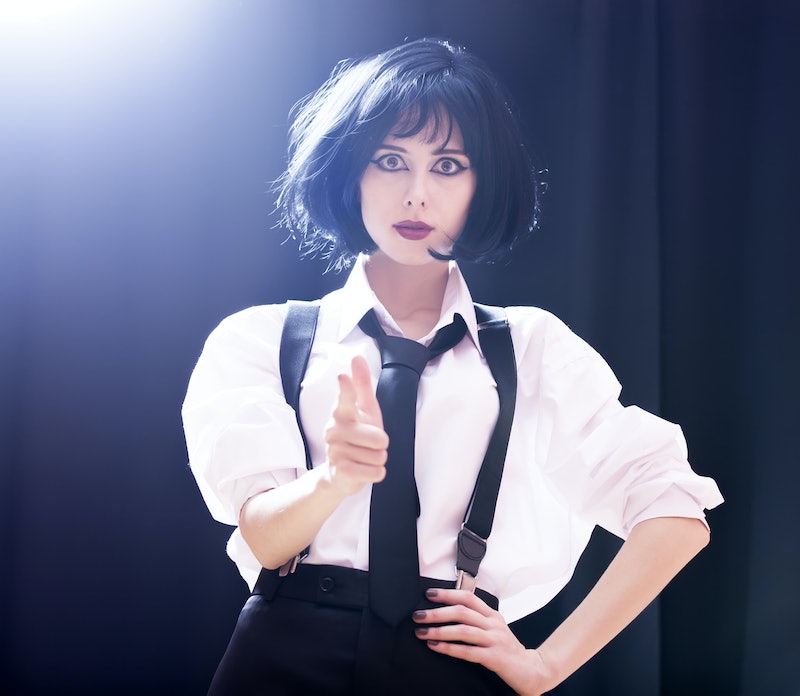 Androgyny has been an aspect of fashion that I have never felt comfortable enough to explore. As a fat woman, I’ve been more confident wearing next to nothing than even attempting to explore the world of androgyny as the fashion world presents it to me. Because to me (and to multiple dictionary entries), "androgynous" should mean adopting aspects of all genders until the outcome is an appearance that is ambiguously gendered. Androgyny is male, female and all the wonderful genders in between, without ever making itself susceptible to labels specifically geared at constructs of the gender binary. Androgynous fashion is meant to address the ridiculousness of prescribing clothing as "male" or "female," especially in a society in which just over 100 years ago the concept of women wearing trousers was downright scandalous.

My issue, before all else, is the common misrepresentation of female androgyny solely being portrayed on flat chested, thin, able and mostly white bodies. For me — for many other fat women and others in general — these kinds of representations of what androgyny means pulled me straight out of my David Bowie daydreams and straight back into a world where my body cannot be perceived as anything other than "fat."

The problem with this kind of representation as the only one we see being made available to anyone is that it reinforces a certain patriarchal concept that the default "kind of person" is male. For a cis-woman to look androgynous, she must change her body to look as masculine as possible; for a cis-man to look androgynous, he can simply wear a dress (and somehow be labelled a revolutionary pioneer in feminism).

Worse still, for a society that is finally coming to terms with the breaking of the gender binary and gender fluidity, these constraints on what constitutes androgyny only further widen the gaps between what is "female" and what is "male." If a man is seen as androgynous when he wears a dress, this confirms and perpetuates the idea that a dress is supposed to be "for women."

The use of androgyny in fashion has hit a high as our social and pop culture consciences have [finally] been opened up to the issues of trans people (not to say they're being addressed in the right way). But still, I find these interpretations of androgyny limiting, as we are still only seeing them on a model standard that I (and millions of others) could never hope to achieve. Writer Hari Nef summed up my thoughts on the popularity of playing with gender in fashion perfectly:

“Fashion is having a moment with gender fluidity, but not necessarily transness. Designers are presenting masculinity as an option for women and vice versa. That’s not ontology, that’s aesthetics, but transness goes deeper than that. Transness is not a destination.”

The problems with androgyny are not solely a trans issues but, rather, ones that can affect almost anybody. Whilst androgyny is an excellent form of expression for trans and non-binary people (especially those not yet "out" to the world), it is and should be a form of aesthetic expression for everybody. However, with the representation of androgynous aesthetic that is presented to us, I cannot help but feel androgyny is being marketed as something exclusive — a "look" that is only for those who hit all the markers of "perfection" in the fashion universe. As someone who hits only about three of these imposed markers, I mourn the loss of the masculine and of the "androgynous" that never found a feature in my wardrobe.

I feel the kind of androgyny I'm seeking is one that is inclusive — one where Frida Kahlo's mustache is a feminine attribute and male nipples are surrounded with sexuality just as a female's. The kind of androgyny that plays with ambiguity in a less obvious manner than simply switching the uniforms of "male" and "female" onto different but similarly thin bodies with juxtaposing jaw lines. Essentially, I want a return to the contrasts of Grace Jones' oiled, almost mechanical-looking female body versus David Bowie's long hair and even longer dresses. But still, even in my heroes of gender fluidity, the bodies used are still slim ones.

I've often considered binding down my breasts, but as a cis-woman, I found myself feeling guilty for this longing to live a non-big-breasted life. To buy and wear a breast binder when there are countless of trans men who could not afford or feel confident enough to wear one feels more than just uncomfortable, but wrong — who am I to do it for aesthetic experimentation? I cannot really remember a life without having massive bazoomas and I distinctly remember moving straight from trainer bras to a C-cup. Whilst I could transform my fat stomach to fit an androgynous look, my breasts will never [literally] fit into the kinds of looks I wish I could live without, but that I crave nonetheless.

One day, I will purchase a powder blue suit, cover my eyes in blue eye shadow and live out my gender fluid dreams. Maybe another day, the world will recognize that just as some women don't have breasts, some men do — and not in a "moob" way, which is even more offensive by trying to make a mockery of fat men by describing them with female attributes. A further day, hopefully, we will stop prescribing gendered labels to our clothing. But for now, I can only thank Tilda Swinton for the #fatshion tags on Tumblr, blogs like Majestic's and the rare occasions in my retail job where parents allow their sons to buy Hello Kitty bracelets.

Essentially, androgyny feels like an easy way to make art, fashion and aesthetic edgier. The politics of androgyny have been lost, and what was meant to be an inclusive celebration of the rainbow of the gender spectrum is now a fashion statement for the bodies that can "pull it off" (a.k.a. the worst phrase in the world).