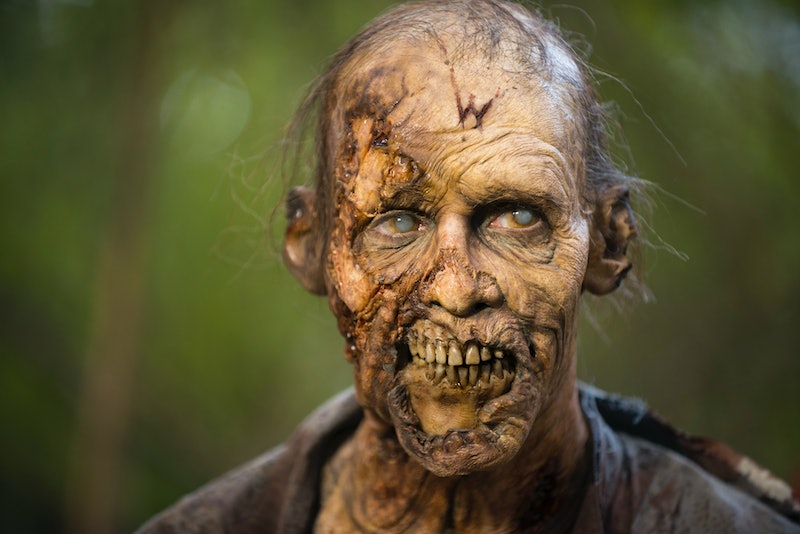 The fifth season finale of The Walking Dead started off with one big bad "wolves" answer. This mysterious group is definitely the people that are marking foreheads and the W stands for them. In the first scene, Morgan encounters one of the wolves. He is marked with a W on his forehead and still very much alive. So much for my theory that those who are marked are meant for sacrifice or punishment, or that Enid is a Wolf spy in the Alexandria Safe-Zone. The two survivors have a chat at gunpoint, and the stranger self-identifies the group as the Wolves. He described them as a pack of sorts. He says that some people believes that humans were wolves who "transformed into men," and talks about an ancient settler tradition. They're bringing back something.

After the stranger implied that Morgan was not making it out of there alive, the two of them got into a scrapple. Morgan got away, and took a rabbit's foot with him for luck.

However, Morgan also discovered that the wolf's gun was not loaded. It was all a bluff. Was this stranger going to kill Morgan or recruit him? He did say that he liked to meet new people, which echoes Aaron's introduction. I have a feeling that will factor into the philosophy of the Wolves once we finally learn more.

We next encountered the Wolves while Aaron and Daryl were out on their road adventures. After following a man in a red poncho who impressed Daryl with his nature skills, the two of them come across a shopping mart. Thinking they're about to ope a truck full of canned food, they instead unleash dozens of marked Wolves/Walkers. Most of them were just standing in the truck. Others had been tied there. Was this a trap, or a mass execution? The Wolves are getting scarier by the minute.

Then, both the poncho guy and the stranger returned with another Wolf. They Wolves slit Poncho's throat because "it would take too long to reset it" — so this was a trap. We later saw them re-setting the trap using loud music, fire (and possible other bait, based on those tied up guys we saw earlier) to draw the walkers inside. The whole thing had a delightfully creepy "cult" vibe to it. Back to our friend Poncho, the two Wolves said "welcome home" to their companion before they offed him... which helps to clarify some of the group's point of view. Their relationship with the dead on The Walking Dead is not quite like what we've encountered before.

At the end of the episode, the Wolves have something especially dangerous. They have pictures from the Alexandria Safe-Zone. Did Aaron have them in his bookbag? Did he decide to include pictures with people this time? This is very dangerous and ups the stakes for next year.

The final shot of the episode showed our dearly departed Poncho pal stumbling past the trucks, now a Walker, and the spray-painted words "wolves not far" on the car where Aaron and Daryl were trapped. See you next season, folks!

More like this
The ‘Squid Game’ Season 2 Renewal Teases A Creepy New Figure & A Return
By Brian Anthony Hernandez and Bustle Editors
Here’s Who Victor Chooses In The ‘Love, Victor’ Season 3 Finale
By Brad Witter
Wait, What’s Going On With Ben In That Umbrella Academy Season 3 Post-Credits Scene?
By Gretchen Smail
Who Could Die In The Stranger Things Season 4 Finale?
By Kadin Burnett
Get Even More From Bustle — Sign Up For The Newsletter