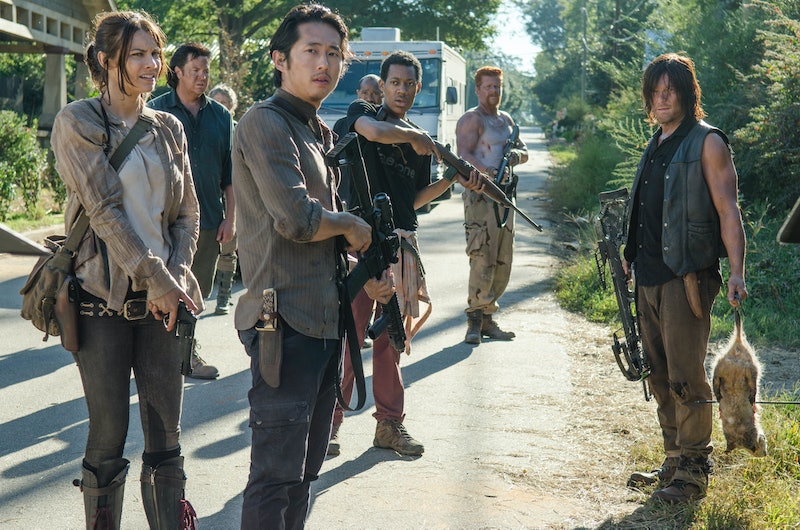 The Walking Dead proved in the March 15 episode "Spend" that the gang may have found a sanctuary with the Alexandria Safe-Zone, but that doesn't mean they are safe. And with rumors of more of those ominous Ws popping up on The Walking Dead episode "Try," will we see the Wolves before Season 5 ends? Of course, that is assuming that the Ws that have been carved into some zombies' heads do in fact stand for "Wolves." (Oh, how I would kind of love it if the Ws had nothing to do with Wolves. The Walking Dead Internet fandom wouldn't know what to do with itself!) Literal signs about the Wolves have been around since the group went to Noah's family's community (RIP Noah!) and saw the message "Wolves Not Far" spray painted on a wall.

The Spoiling Dead Fans Facebook page claims that a source said we won't see who these Wolves are in the March 22 episode "Try" — but we will get more Ws. The Spoiling Dead Fans wrote, "[Daryl and Aaron] find a woman tied to a tree, nude, guts hanging out with a W cut into its head. There are also two other walkers at separate points with the same W on its head."

With more W appearances, The Walking Dead is definitely building up to something big and with the Season 5 finale airing on March 29 (and being 90 minutes long), I'm betting that we see the Wolves before the season is over. And Ernie Padaon of Fansided's Undead Walking agrees with me that the Season 5 finale is the perfect time to bring on the Wolves. They could even show up in the final moments for an awesome cliffhanger. (Hey, remember the Season 4 finale where it ended with everyone stuck in a train car at Terminus? Although I was concerned for all of their safety, it was a badass way to end the season.)

Allanah Faherty of Moviepilot also thinks that we'll see the Wolves in the season finale — but that our group will get rid of them quickly (thanks largely in part to President — err, I mean — Constable Rick Grimes). Although there isn't a group that goes by the Wolves in the comic books, if they are based off of the comic book villains the Scavengers (which is currently the most accepted theory), then Rick will have quick showdown with them. The leader of the Scavengers in the comics is Derek, but maybe it will be Denise or something if the show pulls another gender swap like it did with Deanna (the artist formerly known as Douglas). I don't think the Wolves will be around for long (kind of like the Terminus cannibals), and if the main group does battle them at the end of Season 5, it could put Rick into the main power position at Alexandria for the start of Season 6. But, let's not get too ahead of ourselves — we still have two episodes left in Season 5 and I'm going to savor every single moment of them.