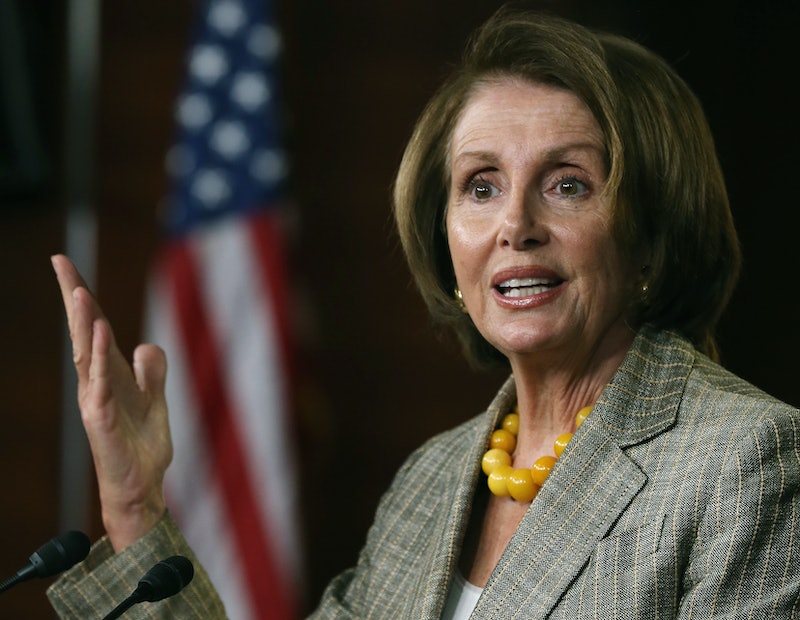 Being a woman in many professional fields can be challenging, but being a woman in politics seems like it could be pure, unadulterated hell. On top of the cutthroat smear campaigns and constant public scrutiny, you'd have to contend with the sexist descriptions of female politicians that run rampant in the press. A group called the HRC Super Volunteers recently launched a campaign to call out journalists who write about Hillary Clinton during the upcoming election cycle using sexist language. They even compiled words that "shouldn't" be used when writing about her, like "ambitious" or "entitled."

While many have described this group's effort as more of an "outrage machine" than a useful endeavor, that doesn't mean that certain press people couldn't use a "misogyny check" on their computers before submitting their pieces. Just last year, the Women's Media Center published Unspinning The Spin, a massive tome of unbiased language that can be used by reporters, government officials, and just about anyone who wants to provide a balanced look at the facts. However, most writers who tend to use sexist language are the last people to check out such a guidebook, so there are still plenty of questionable discussions of female politicians in the papers and online. Here are nine ways the press shows its sexist bias towards our lady lawmakers.

1. Descriptions of their hairstyles

Mitt Romney's hair may be totally on fleek, but few writers are going include that in their stories about an appearance he made. On the other hand, there have been entire articles written solely about Hillary Clinton's hair. Even a recent article in the New York Daily News suggests that Clinton looks presidential because of her "perfect highlights," on the cover of her new book. Did they say that about Barack Obama too when he published his book before running?

2. Descriptions of their vocal styles

U.S. Senate Democratic leader Harry Reid once described Sarah Palin as "shrill." Whatever you think of her as a politician,"shrill" is a way to feminize and diminish her because of her gender, instead of basing the attack on her actual words. Descriptions like "nagging," "whining," and "shrill" should never fly when discussing a woman's speaking voice.

3. Descriptions of their weight

In her memoir released last year, Senator Kirsten Gillibrand reveals that a male colleague once called her "chubby," and a few years ago, political commentator Matt Drudge singled out Senator Barbara Mikulski when talking about Senate "fatties." Male politicians can be chided for their weight, too, but women's bodies are more likely to be scrutinized in that way.

4. Descriptions of their clothing

Appearance is everything in politics. But how often are we hearing about the make of a suit or the colors of a tie that the Majority Whip was wearing? A female politician's clothing is always over-analyzed for symbolism, whether it be a pantsuit, heels, skirt, or ballgown. Take this entire piece on former Speaker of the House Nancy Pelosi's style from 2006, for example.

The HRC Super Volunteers think it's sexist to call Hillary Clinton "ambitious," because every politician is ambitious by default. This could be a bit of a stretch, because it is a gender neutral word, but if used too much, it can subtly promote the idea that women aren't as naturally suited to politics, or that they have to move mountains to succeed in the arena.

6. Talking about their parenting

Much truth is said in jest, as this Onion article suggests about female politicians who are also mothers. Former Texas state senator Wendy Davis was bashed for being a "bad mother" because she was divorced and her husband kept primary custody of one of her daughters. Has a man's fitness as a father ever made headlines in political news?

7. Descriptions of their age

With the 2016 election on the horizon, there are numerous articles on how Hillary Clinton is too old to run for president even though Ronald Reagan ran when he was the same age. And when you factor in that women live longer than men on the whole, it makes even less sense to comment on a woman's age. Bob Dole was the Republican nominee at 73, after all.

8. Reducing them to individual body parts

Are there any male political figures that are famous for a body part the way Michelle Obama has been singled out for her arms? The coverage is of course complimentary, which is nice, but it's such a common practice to reduce women to a collection of body parts that this doesn't do much but perpetuate that kind of sexist thinking.

9. Talking about them "having it all"

It's understandable that some people are still getting used to the idea of women in positions of power. It can be truly shocking seeing us doing anything other than mothering, I know. But in the 21st century, women can be both mothers and politicians and make it work. How they do that is none of our business — when you ever heard a reporter ask a man how he makes time for his family and Capitol Hill? Articles talking about "having it all" are the epitome of bias in media coverage of female politicians.

More like this
Kim Kardashian Is Releasing A Line Of Earbuds With Beats
By Alexis Morillo
Your Daily Horoscope For August 12, 2022
By Mecca Woods
25 Things I've Reduced My Life To, In Addition To WFH In My PJs
By Ginny Hogan
How To Change Your Twitter Handle
By Emma Carey
Get Even More From Bustle — Sign Up For The Newsletter