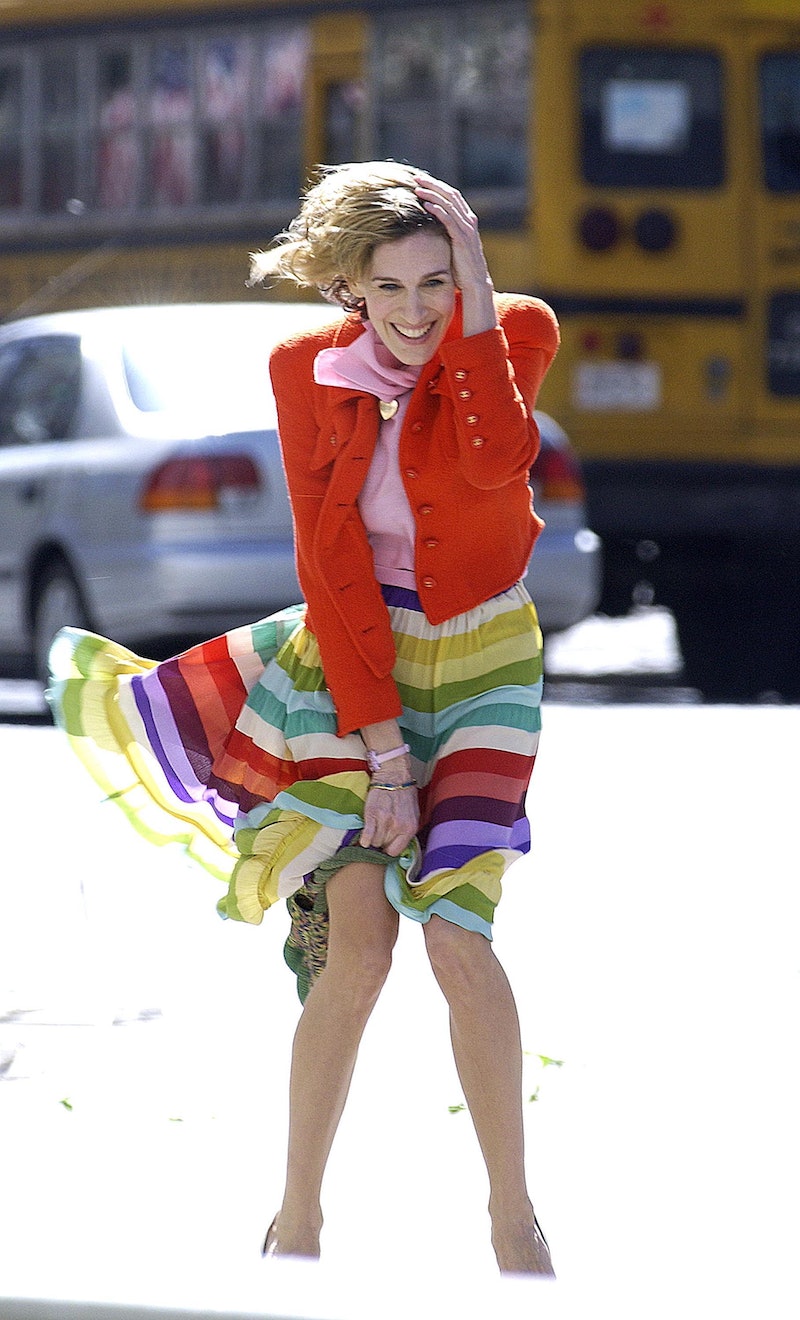 Modern TV shows have the tendency to garner cult-like congregations of fans, from Veronica Mars' Marshmallows to Sherlock Holmes' Cumberbitches. However, few shows achieve the abject loyalty of their devotees like Sex and the City, — specifically Sex and the City outfits. After all, the program which still garners sartorial references even 11 years after HBO aired the final episode. Arguments abound as to why exactly the series was so dear to its viewers' hearts, but I would argue that despite a contrived streak, the show masters the emotions of a single woman living and making her professional mark in New York City. And as any true fashionista knows, the clothing you wear during especially pivotal moments in your life become indivisible from the emotions related to that experience. Carrie Bradshaw, in all of her sartorial wisdom, is the fictional embodiment of emotionally-driven clothing.

Sex and the City demonstrates this truth time and again, hyperbolically at times but nevertheless in a manner that is innately relatable. When Carrie's first attempt to marry Mr. Big fails, her elegant and outrageous Vivienne Westwood wedding gown gathers dust in a corner of her closet, and even months later is too painful for the jilted bride to look at. And after unearthing her famed newspaper dress from its place of pride in her closet, Carrie relives a moment of youthful joie de vivre. Read on for 19 ensembles only honest-to-goodness Sex and the City fans will remember from the beloved series.

1. The "Meeting The Boyfriend's Ex" Disguise

A curious Carrie decides to meet Mr. Big's ex-girlfriend by posing as a children's book writer; after all, the series took place before the advent of Facebook stalking. True to form, Carrie dresses the part in a dramatically subdued and nearly corporate ensemble featuring a black strapless dress and simple gold watch.

Perhaps the clearest case of juxtaposition between Carrie's temperament and her ensemble, this ensemble of a watermelon-patterned frock, white pumps, and a tasteful flower brooch belie Carrie's discontent with her relationship, and indeed with Paris itself.

In a truly farcical debacle, Carrie journeys across the United States via train to reunite with Mr. Big and read an excerpt from her book. Instead of achieving the desired outcome, Carrie's playful flannel halter and curled bob are met with an unreceptive beau and an indifferent Pomeranian whose popularity surpasses that of Carrie herself.

4. The Most Glamorous House-Hunting Ensemble In Sartorial History

If you've ever entered a breathtaking apartment and uttered the immortal words, "Hello, I live here," you may dub yourself a true devotee of Sex and the City.

Carrie dons what fittingly equates to a modern, white wedding gown as she tearfully explains to Aidan why she cannot marry him.

6. The Hello And Goodbye Ensemble

In what amounts to be a landmark episode of Sex and the City, Carrie bids Mr. Big adieu and greets Miranda's baby in a truly sensational lace slip dress, floral coat, and hot pink heels.

In an attempt to conceal Sarah Jessica Parker's pregnancy, costume designer Patricia Field cloaked the actress in this immediately identifiable Juicy Couture terrycloth dress. However, the ensemble's moment is made even more memorable when Carrie encounters Aidan's new girlfriend, whose cringing face is truly GIF-worthy.

Carrie and Mr. Big's relationship is fraught with significant moments, but one true sartorial and emotional standout occurs when the duo decide to simply "stand still" together in the wee hours of the morning, Carrie clad in a simple silk bias-cut dress.

In preparation for letting Mr. Big lead a conventional life with fiance Natasha, Carrie selects a simple suit of armor: a little white dress and her signature untamed curls.

11. The Ill-Fated Bustier and Skirt

You could not plan a more glamorous or outrageous ensemble in which to slip, as Carrie does in the hallowed halls of Dior while visiting Paris.

Though her character is far from devout, Carrie sports this nearly-demure striped frock and dainty white gloves whilst attempting to woo Mr. Big's mother at church.

Even the casual Sex and the City viewer knows the Carrie Bradshaw Naked Dress, which the character sports on her first date with Mr. Big.

While playing the part of Jackie O. to Bill Kelley's modern-day John F. Kennedy, Carrie dresses the part of a politician's wife in a beige wrap dress and oversized sunglasses.

15. The Date With New York Ensemble

While engaging in a date with her favorite significant other, New York City, Carrie sports a cheerful ensemble of a striped chiffon skirt and cerise jacket over a pussybow blouse. What more could you ask for in date attire?

Though Carrie and Aleksandr Petrovsy never arrive at their happily ever after, the artist presents Carrie with an Oscar de la Renta frock fit for a fairytale, which Bradshaw takes for a romantic spin around McDonalds.

During an episode which revolved around self-perception and body image, Carrie sported a pastel patchwork jacket which almost perfectly paired with her new Manolo Blahnik pumps — a purchase that thinly disguised an attempt to upstage Natasha.

While roaming the streets of Paris in a pitch-perfect fur chapeau and powder blue coat, Carrie sees her own book in the window of a local shop and is immediately recognized by the store's proprietors.

After pulling an unexpected all-nighter, Carrie nearly misses her photo shoot with New York Magazine. Though she is to be one of the publication's "single and fabulous" stars, the resulting shot is stark, makeup-free, and un-styled — several adjectives which rarely categorize Carrie, and give the writer cause for contemplation.