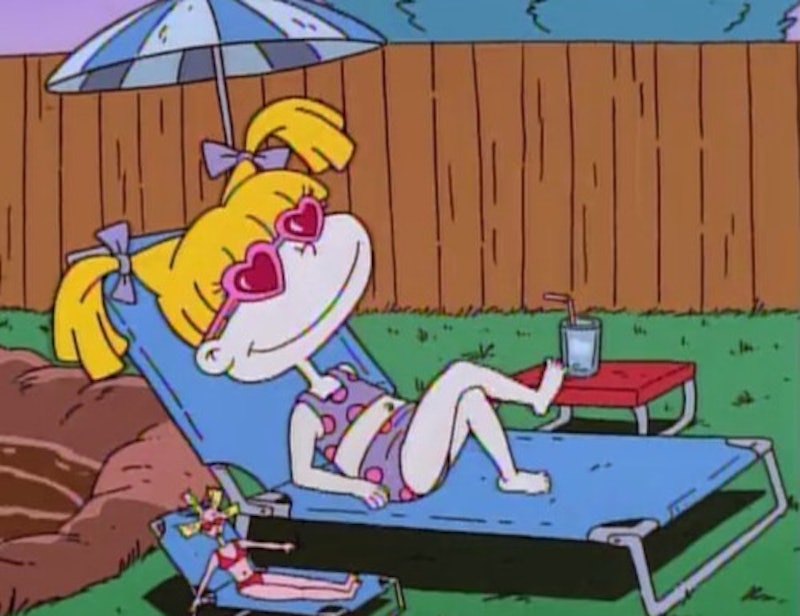 As a child, my parents were sufficiently disturbed that my favorite Rugrats character was fledging sociopath Angelica Pickles. "But Angelica is the bad guy," they would say, as if that didn't make her more intriguing. Truth be told the blonde bundle of evil wasn't a popular pick, and when she was thwarted at the end of every episode, I alone felt upset. But I stood by it then, and I stand by it now: Angelica Pickles is a fierce badass that was the real breakout character of the series.

Yeah, you heard me right. Angelica is a queen, wielding Cynthia as a scepter and existing far more evolved than the average 3-year-old. She had everyone—from the dumb babies who kept trusting her despite multiple acts of deceit to her clearly college-educated parents—wrapped around her finger. That's a lot of power for someone who can barely pronounce "responsibilities."

And at the end of the day, I feel as if she had some good After all, Angelica was my role model as a child, and I became a completely well-adjusted adult (I said, still pantless at 3 in the afternoon, counting down the minutes until it's socially acceptable to start drinking). If you still hold the (wrong) counter-opinion, than let me offer you these seven reasons why Angelica is a total HBIC.

1. Because she prepared the babies for the harsh realities of the real world

Was it FAIR for Angelica to toy with the Rugrats' emotions and trick them into doing her bidding. No. But you know what ALSO isn't fair? LIFE. So it's important that they learn this lesson sooner rather than later. Like, honestly, Tommy, you're one, time to realize that the world isn't all sunshine and flowers.

2. Because not only could she trick babies into doing her will, but she could manipulate full grown adults

It's one of the most iconic episodes of Rugrats, nay, television. Angelica is spending the week with her aunt and ankle, and after five minutes without attention she decides to fake breaking her leg. Due to a hospital mix-up, it works, and she has Stu and Didi catering to her every desire. This culminates in an unforgettable scene, where Stu is up making chocolate pudding. "It's 4 O'Clock in the morning, why on Earth are you making chocolate pudding?" Didi asks. "Because I've lost control of my life," Stu replies, spirit broken.

And after all this, Angelica isn't even hungry anymore. Girl does evil on a 3rd grade level.

3. She had serious business savvy and leadership abilities

This is probably due to the influence of her mother Charlotte, a strong working mom who believes that if Angelica's "ever going to make it in a male-dominated power structure, she's got to eat, breathe, drink and sweat self-esteem." And with that self-esteem, Angelica is able to build early entrepreneurial skills, starting her own successful lemon-lade stand. Things go swell until, of course, the babies start to strike and try to unionize. Whatever.

I also appreciate that she insists her father pays her ten cents for a cup like everyone else. Very Ayn Rand of her.

4. Because honestly, who does Susie Carmichael think she is?

Susie was introduced to be a foil to Angelica, to intercept Angelica's reign of power over the clueless infants. She taught the babies the world could be a place of possibility, and fundamentally I appreciate that. But on the other hand, who cares, Susie was so goddamn boring, oh my god.

With her defining traits being "nice" and "can sing pretty," I think I can argue that Susie is far less intriguing than Angelica, who is a Machiavellian genius with charisma and imagination. Real talk.

5. Because she saw the importance of dessert

Our girl had a fierce love affair with cookies that tap-danced upon an actual addiction, so I kind of doubt modern millennial Angelica would buy into vegan baked goods. Then again, she also ate cookies once it was drenched in detergent water, so who knows, maybe she could go without gluten. Point is, her dedication to sugary snacks is nothing short of heroic.

6. Because deep down, she had a sweet side

I MEAN. She always defended the babies when they were picked on by anyone other than herself. That makes her somewhat redeemable.

7. Because every show needs an Angelica

What would Star Wars be without Darth Vader? Or Harry Potter be without Lord Voldemort? Angelica was a necessary antagonist she not only fueled some of the best jokes in the show, but also provided the babies some sort of force to go up against. Otherwise the show is just... infants playing pretend. No joke. So even if you hated Angelica, if you rooted against her from start to finish, you can't deny that without her Rugrats wouldn't be the show we still fondly remember all these years later.

More like this
Everything To Know About 'Scream 6'
By Jack Irvin and Jake Viswanath
Alicia Silverstone Has Recreated An Iconic 'Clueless' Scene
By Frances Stewart
“The Door Is Always Open” For Another 'Breaking Bad' Spin-Off, Says AMC Boss
By El Hunt
Neil Patrick Harris Will Play 'Doctor Who's “Greatest Enemy” Yet
By El Hunt
Get Even More From Bustle — Sign Up For The Newsletter