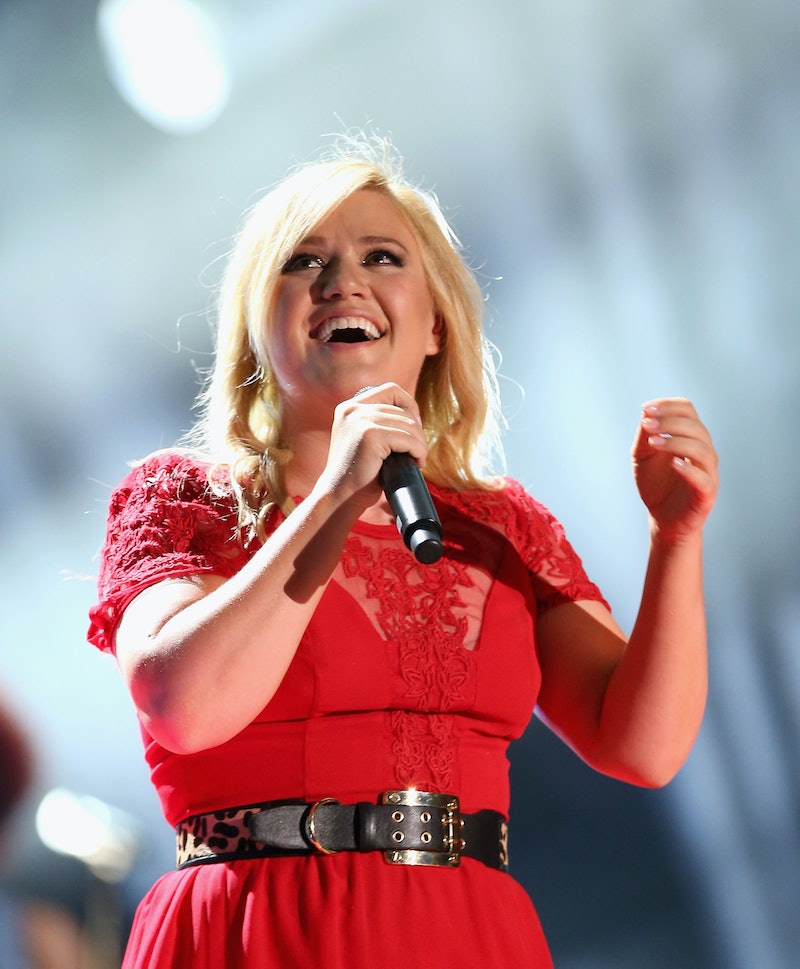 Congratulations, Kelly! Earlier today, Clarkson revealed that she'd gotten married over the weekend, confirming rumors that had been circling ever since she was spotted picking up a marriage license last week. We're thrilled for the new bride and her husband, Brandon Blackstock, and we wish the couple all the best. AND WE MEAN IT.

Clarkson, who's made a career off of singing hits about her uncaring exes and bad luck in love, deserves nothing but happiness. In celebration of her big day, here are 10 reasons we haven't stopped loving the singer since she first won our hearts more than a decade ago:

1. Because Her Wedding was Perfect

Not many details have been released, but judging from the photos that Clarkson herself posted, her wedding looks like it was ripped right out of the pages of a Martha Stewart magazine. Between this photo:

... We're pretty sure Clarkson just had the most perfect wedding in the universe.

In both her music and her interviews, Clarkson has never shied away from telling it like it is. She's talked with candor about everything from her weight to her relationships, and her honesty has encouraged countless girls and women to find comfort in their own lives.

3. Because She Gives Back — And Means It

Plenty of celebrities do charity work to boost their PR images, but Clarkson is one of the few that seem to actually care about giving back. She's performed at numerous benefit concerts, is an ambassador for March of Dimes, has helped build orphanages for African children, and rescues more unwanted animals than you'd think a house could hold. When Clarkson gives back, you know she's doing it for the right reasons.

4. Because This Moment Still Makes Us Cry

Eleven years later, and it still gives us chills. Between her tears, her mom's glee, and Brian Dunkleman's half-hearted attempts to pretend he matters, watching Clarkson take the American Idol crown and sing "A Moment Like This" brings nothing but pure pleasure.

Think you're the only socially awkward, food-obsessed Facebook stalker out there? Wrong. Kelly's got your back.

6. Because She's a Feminist

As a hugely successful female singer who's had to fight to get what she deserves, Clarkson knows the importance of feminism. Whether it's singing "Miss Independent" or standing up for herself against Clive Davis, she doesn't shy away from saying what she thinks and making sure she's treated with respect.

7. Because She Makes Every Song Better

Sometimes, you hear a song and think it's perfect just the way it is. And then Kelly Clarkson covers it, and you realize that the original has just been blown out of the water. A recent Buzzfeed post highlighted 22 of Clarkson's best covers, and while it doesn't mention her version of Anna Nalick's "Breathe (2 A.M.)," the chills-inducing cover would be on the top of our list. Skip to 1:25 to hear the amazing song:

8. Because She Shares Our TV Taste

Ever since Clarkson got Twitter, she's been using it to express her love for Parenthood and Friday Night Lights. Whether it's tweeting Lauren Graham or swooning over Kyle Chandler, Clarkson has no hesitance about expressing a pop culture love that we can definitely get behind. Although we have to admit that we're pretty jealous over this:

9. Because From Justin to Kelly Happened

Clarkson probably wants to forget that From Justin to Kelly, the hilariously awful post-Idol movie she starred in alongside fellow alum Justin Guarini, ever happened, but we want to keep the memories of the Worst Movie Ever Made alive and well.

10. Because of That Voice

There are too many examples of Clarkson's vocal prowess to count, but here's one of our personal favorites. There's no doubt about it: Clarkson is one of the most talented singers of this generation. And with a new Christmas album coming soon, it won't be long before we'll be treated to even more Clarkson magic.

Congrats again, Kelly. We love you so!