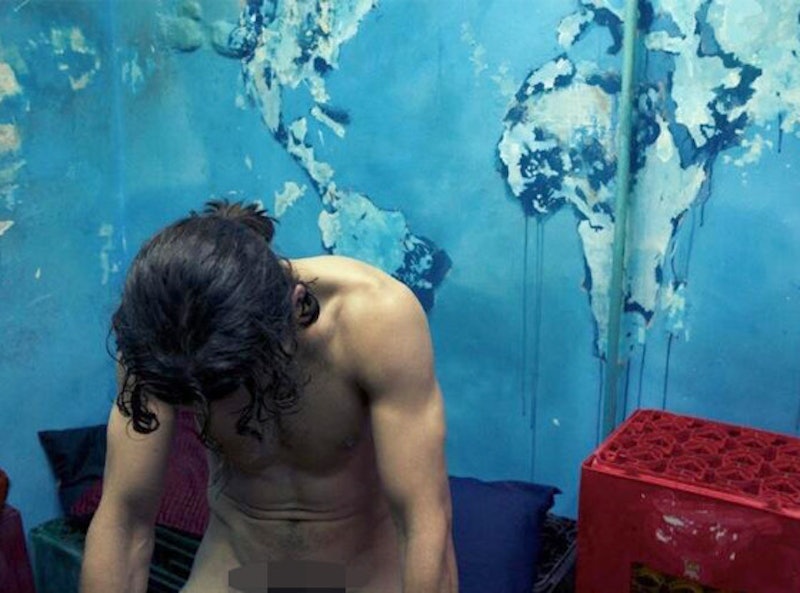 It is the rare movie star who freely and frequently disrobes for the general public, but once again, Shia LaBeouf has proven he is more than happy to be amongst that selective set. He tweeted a full frontal teaser picture from his upcoming project, Charlie Countryman , showing that this is a guy who is clearly extremely comfortable with his body. This is far from the first time Shia has acted in the buff, in fact, it will be his third. He first took it all off for Icelandic band Sigur Rós's video for their song, "Fjögur píanó," then once more for Lars Von Trier's very naked upcoming movie Nymphomaniac, along with all the according promotional pictures and videos, and now, well, he's gotten naked again just because.

One might think the shock value would decrease each time, but if the buzz off of Shia's tweet is anything to go by, that would severely underestimate how fascinated we are with naked celebrities, especially when we get a glimpse of the most uncommon body part to make it onto our screens, the penis.

Maybe Shia LaBeouf is using his junk to make a statement about the nudity double standard in Hollywood, or maybe he's just a guy who really loves his dick. Either way, it's clearly going to continue making appearances until he decides it's time for little Shia to retire from the silver screen. I kind of admire his lack of fucks given, considering that onscreen peen is not allowed to be hard, and thus, is a little bit less impressive than it might be in it's natural glory. That takes balls, all puns intended.

But, taking into account the human obsession with comparing size, which shot of Shia's not shy-a nether regions is the best? Is it his performance art penis in "Fjögur píanó," his almost penis in Nymphomaniac or will it be the Charlie Countrypenis?

Although two of the three remain to be seen, I'm willing to bet Sigur Rós's peen scene will go un-topped. That entire video has been burned into my brain forever, and no blurred out Twitter tease will sway me. The only thing that might would be a Forgetting Sarah Marshall style close up, and if what I saw in "Fjögur píanó" is anything to go by, something tells me it won't have quite the same wow-factor as Jason Segel's... ahem, debut.

But, for Shia LaBeouf fans, take a deep breath and get excited, there is a lot of LaBeouf in the buff to look forward to this year.