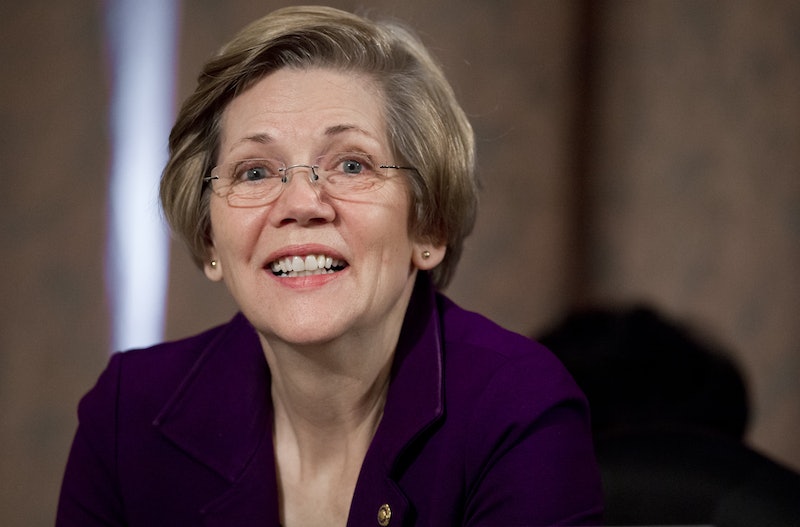 We've heard it time and time before, but once again Elizabeth Warren has said she won't run for president in 2016. When directly asked in a NPR interview if she wanted to run, Warren flatly said, "I do not." Still, both Democrats and Republicans would love nothing more than the Massachusetts senator to have White House ambitions, though their exact reasons for a Warren presidential candidacy are dramatically different.

Warren's latest denial of a presidential bid came in a Monday chat with Jeremy Hobson of the radio show Here & Now, during which she also expressed no interest in being a Democratic leader in the Senate, leaving that position to the likely Chuck Schumer of New York. Warren insisted that even if she wasn't running for president, she was still "fighting this fight." She sidestepped a question about Democrats' concerns over producing a viable opponent during the primary election to former Secretary of State Hillary Clinton, who, as Warren noted, has yet to officially announce her candidacy.

Warren made her mark during the 2012 elections with her anti-Wall Street rhetoric, which proved popular during the height of the Occupy Wall Street movement. A former Harvard law professor and avid consumer protection advocate, she unseated Republican incumbent Scott Brown to become the first female senator from the state of Massachusetts. Warren has quickly risen to become one of the most visible figures within the Democratic Party, making her an easy choice during future White House talks.

Liberal Democrats would love to see Warren bring progressive ideals to the national spotlight as a realistic candidate. For those who support Clinton, a quality primary opponent would be necessary to help shape the former state secretary's platform and establish credibility should she head into the general elections. On the flip side, Republicans see a Warren run as an opportunity to divide Democrats.

But a Warren presidential bid appears to be a popular idea for everyone — except Warren herself. When it comes to the 2016 presidential elections, let's just say the senator is likely going to sit this one out. But don't be surprised if in later races a Warren run becomes more than just pundit talk.