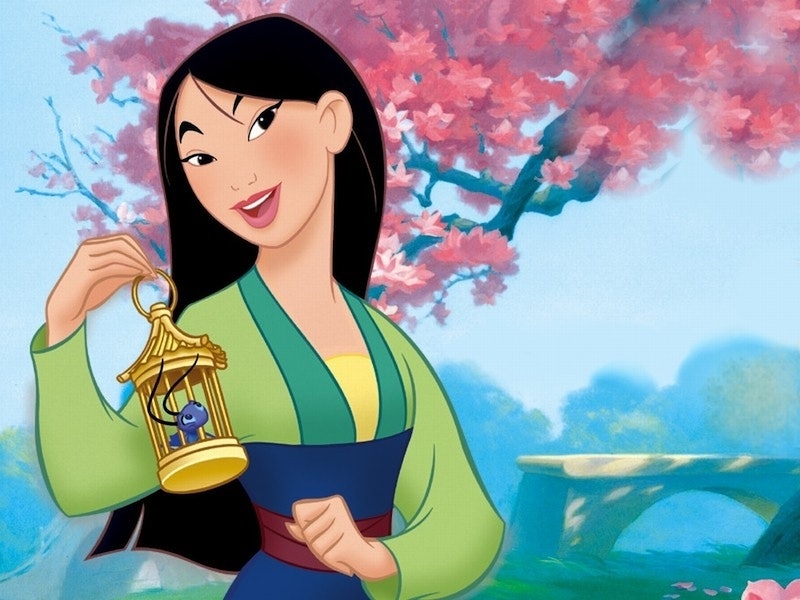 In 1998, Disney debuted the first Disney princess I could completely relate to. Unlike the Disney princesses that came before her — Snow White, Cinderella, Aurora, Ariel, Belle, and Jasmine — Mulan was the odd girl out. The fact that Disney is making a live-action Mulan ahead of all of them save Cinderella and Belle comes as a surprising gift to a girl who felt like no one had ever understood me the way that Mulan understood me. Mulan felt out of place in her family, she was purposefully out of place in the army, and she somehow managed to get all of China and the Emperor to bow to her just by being herself. And, unique among every other princess in the Disney line up, Mulan is not now, nor has she ever been, a princess. She's a soldier. She's a warrior. She's a girl, who defeated Shan-Yu with a paper fan and fireworks.

Because Mulan's strongest quality was never that she could fight. She was bad at fighting. For most of the movie, she could barely fight and most of her action sequences relied not on fighting but on her actual skills: she was determined, she was resourceful, she was brave, she was loyal, she was quick-thinking, and she was a woman in a time when men relied on brute force while women were forced to channel their strength into more subtle areas. The turning point in her training came not when she finally learned how to fight, but when she was the first person to figure out how to use a ribbon (okay, sash) to go fetch the arrow from the top of the pole. Girl power like whoa.

And that's why it's so important to me that Mulan is getting her own live-action film, even before Jasmine, even before Pocahontas, even before Tiana (you know, the only other three princesses of color). While Mulan was just the latest in a line of Disney princesses taking control of their own stories and being given more characterization than "pure of heart, waiting for their prince to come save them," she was the first Disney "princess" who was also a warrior and a soldier. She was the original Action Girl, from a time when Action Girls were only those who could talk with a weapon as well as they could talk with their mouths. But she was the kind of Action Girl who learned how to place as much emphasis on the word Girl as she did on the word Action.

Take the climax of the movie for example. Mulan has been cast out from the army after they've discovered that she's a woman, and, instead of killing her as is the law, Shang decides to spare her because she saved his life. As soon as she notices the Huns still popping out of the snow "like daisies," Mulan goes rushing into the city to save the day — despite the fact that no one will listen to her. She can't help it. She's a hero. When she's proven right, not only do the soldiers she fought alongside immediately abandon Shang and his We'll Force This Door Open With A Battering Ram strategy, but they all dress like women (save Shang) in order to defeat the Huns and save the day. The moral of the whole movie is literally that being a girl saved the day, and that being yourself is enough.

It's a lesson that the world still needs to learn almost 20 years later, and that's why I'm glad that Mulan is the next live-action Disney movie that's coming up. As much as I love Tiana, Pocahontas, and Jasmine, Mulan holds one of the feminist message that I think the world most needs to hear right now.