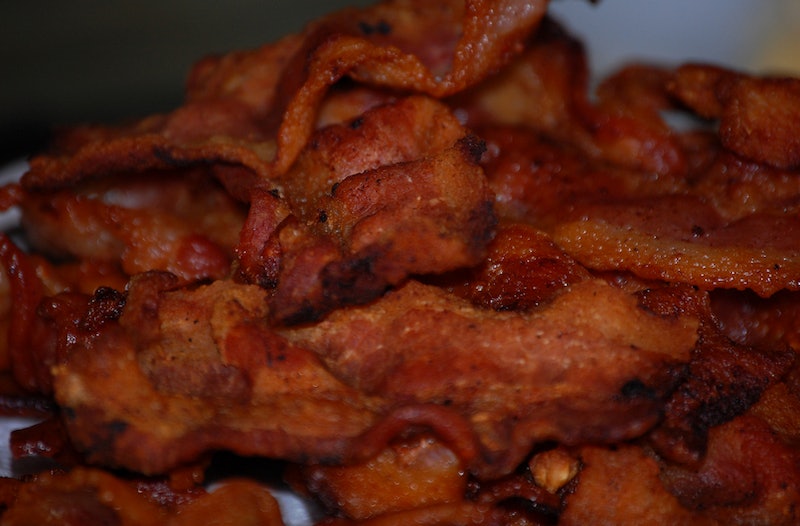 Honesty hour: I did not eat bacon until I was 19 years old. As you can imagine, my digestive system was doomed starting on the fateful college day that I was finally pinned to a seat in a dining hall and forced to try it. But alas, no bacon digestion I will ever experience will have even a shred of them intensity of that of Molly Schuyler, the 125-pound woman who ate five pounds of bacon in five minutes and set a Guinness world record. The incredible feat took place in a restaurant in Iowa, and the double whammy? When she attempted this eating challenge, not even 24 hours had passed since she had wolfed down a 4-pound sandwich and a pound of tater tots in fifty-five seconds. Can I get a HOLY S#@%@$?

The mother of four hit the competitive eating scene in 2012 and has since signed on with the independent competitive eating league All Pro Eating, which I imagine is a magical place full of pizza and burgers where nobody ever has to ask for extra fries. She has been blazing through eating records seemingly with ease, eating two 72 ounce steaks in fifteen minutes and 363 wings in 30 minutes.

If that seems totally terrifying, it's because it is. But Molly Schuyler has proved time and time again that she is no coward in the face of excessive piles of meat. For your reference, this right here is what five pounds of bacon looks like:

Glorious, right? Now imagine that I just set down a timer and told you to eat all of it in five minutes. Hell, imagine I told you to eat it all in an hour. NO MERE MORTAL can accomplish this kind of task.

But then again, Molly is no mere mortal.

And as if that isn't badass enough, here's what she was up to the day before:

CUTLERY IS FOR THE WEEEEEAAAAAKKKK. Here's the full video of her triumphant eating victory:

Of course, Molly is far from the only female eating champion to keep your eye out for. Here are some other contenders you wouldn't want to meet in the dark corner of an Old Country Buffet.

1. The "Black Widow," aka Sonya Thomas

Here she casually devouring 40 hot dogs. 47 years old and 98 pounds, her stomach is a force to be reckoned with.

The 125-pound competitive eater fell into the sport by accident, but is definitely one to watch out for. Here she is chugging two liters of soda without even stopping.

First, a question: How good at this do I have to get before I too can get a nickname as cool as this? A former chemistry teacher, the 105-pound Juliet once ate 13.5 pounds of cranberry sauce in ten minutes. Here she is at a hot tamale eating contest.

I think it's safe to say that we all just evaluated our life choices and professions a little bit. Is this your true secret calling? Better try and down as much bacon as you can this weekend to make sure. You know, for science and stuff.