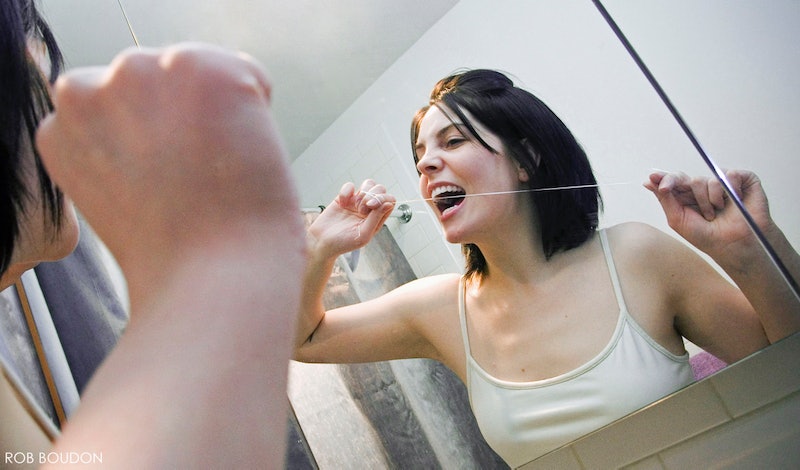 Everyone who wasn't paying attention the last time they went to the dentist, say "AYE!" Just kidding. There are people sleeping halfway across the world right now and it would be rude to deafen them, which is surely what would happen if all of us terrible dentist-ignorers spoke up at the same time. We've all been told repeatedly since we were kids how important it is to floss, but this handy video from Dr. Carlos Meulener shows us a convenient and easy flossing hack that will make you realize just how wrong you've been doing it up until now. (That is, if you've been doing it faithfully at all. Guilt guilt guilt.)

Despite the fact that I am a fair weather flosser at best, even I managed to glean some insight from this. Who knows? Maybe I will change my ways and start flossing twice a day instead of whenever the guilt motivates me enough to go for it. As you might be aware, the human mouth is not exactly well-lit and can be super annoying to navigate, especially if you have the patience of a toddler (or me). But Meulener's video sheds some light on how to make flossing as efficient and healthy as possible, so we don't waste more of our lives doing this otherwise phenomenally boring task and risk being alone with our thoughts an entire extra thirty seconds.

His first tip? Rolling the floss on either side on both of your index fingers.

When you proceed, you should to the upper teeth with the floss leveled between your thumbs.

And do the lower teeth with it leveled between your middle fingers. (In other news, this is the most politely the internet has ever flipped me off.)

He then demonstrates for all of us flossing noobs exactly how the job gets done.

If there were a flossing Olympics, I'd pretty much bet all my money on this man.

He stresses that flossing is highly crucial for getting rid of the bacteria that toothbrushing only starts to take care of, and that using this technique, it only takes a minute. Think of all the time you just shaved off your morning routine! What will you do with those extra thirty seconds every morning?! (Aside from inhaling enough coffee to effectively destroy whatever dental care you just did.)

As handy as that hack is, there are a ton of other weird things you could be doing wrong while brushing your teeth that might not even occur to you. Dental hygiene is wack like that. Here are a few other things you might not have realized are bad for your teeth:

1. Brushing your teeth within 30 minutes of eating

It turns out it might hurt your teeth even more than if you'd just left them alone (which is how I'm going to justify pretty much every time I eat the Pocky Sticks by my bed at midnight and don't bother getting back up). It all has to do with the lower pH level in your mouth.

This is one arena where you don't get an extra "A" for effort. Brushing your teeth too hard can erode your gums and damage your teeth in the long run. Be gentle to your tiny outside bones, friends.

The particles in whitening toothpaste can actually be really harsh and damage your teeth. If you've gotta use it, dentists recommend switching back and forth between that and regular fluoride toothpaste to cut your teeth some slack.

4. Using the same toothbrush for a long time

They should get rolled out every 3-4 months, so if you're remembering the good ol' days with your toothbrush....you probably shouldn't be.

5. Leaving it on the counter

Guys, all sorts of gross stuff happens in your bathroom. Every time you flush a toilet, for instance, particles from inside of the bowl get launched all over the place. For the sake of your mouth, it's probably best to store it in a cabinet, in an upright position if you can.

This toothbrushing PSA was brought to you in part by the least responsible flosser in the world.