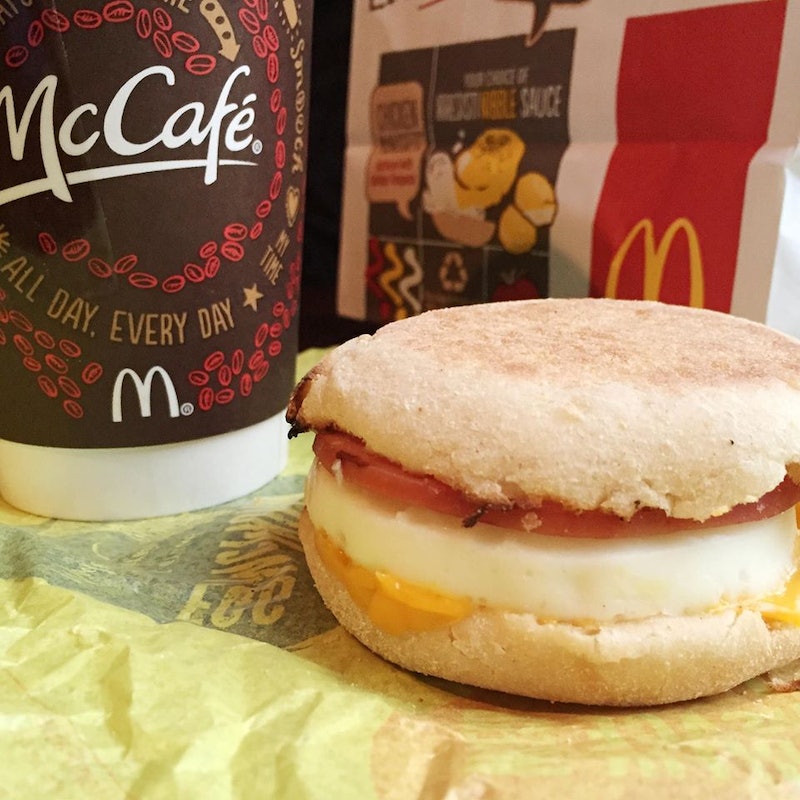 As you may have heard, McDonald's is currently testing out a breakfast menu that's available at all hours of the day and night. But where can you actually get all-day McDonald's breakfast? In only one market, alas: San Diego. But hey, don't fret if you don't live in the area — there are actually a surprising number of fast food joints that offer breakfast either all day or at slightly unusual hours. Egg McMuffin's aren't the be-all, end-all, after all!

McDonald's spokeswoman Terri Hickey confirmed the all-day breakfast test to CNBC yesterday via email. “We're excited to serve our customers in this area some of McDonald's great-tasting breakfast sandwiches, hash browns, and other favorites all day long,” she wrote via email. However, we also probably should start celebrating too much right now; Hickey also noted that “it's premature to speculate on any outcomes,” so it's always possible the test will be a one-shot deal. Just, y'know… something to keep in mind.

Most other fast food chains usually stop serving breakfast at 10:30 or 11AM — but these seven options break the mold a little bit. Some of them offer their breakfast menu all day; others don't, but do make it available for late-night drive-through runs. So hey, if you're not in San Diego — or if McDonald's all-day breakfast dies in the testing phase — at least you can still get a breakfast burrito at three o'clock in the afternoon from these places, right?

I've never been a big Sonic fan; the whole drive-in gimmick is kind of appealing, though, so maybe I should give it another shot. In any event, it serves breakfast sandwiches and burritos all day, so go ahead. Have breakfast for dinner. You know you want to.

Jack in the box is well known for its long-standing breakfast-at-any-time policy. Who's up for a waffle sandwich or mini-pancakes?

I was not aware until just now that a taco chain called Chronic Tacos existed, but, well… there you have it. It's limited to California right now, which might explain it — in any event, though, it offers breakfast burritos and breakfast tacos at all hours of the day and night. Yum.

OK, so technically White Castle doesn't have breakfast all day — but it does cover a… shall we say, interesting array of hours. You can get a hold of the chain's breakfast menu, which includes egg and cheese sliders and French Toast sticks, from midnight until 10:30AM. Harold and Kumar definitely had the right idea.

Bojangles is another chain I've never been to, but that's probably because I've never lived in a state they exist in. But hey, if you're a biscuit fan, this is the place to go: You can get a huge variety of biscuit sandwiches here pretty much whenever you want. Yes, please!

Like White Castle, Del Taco doesn't do all-day breakfast — but hey, 11PM-to-11AM breakfast ain't bad. I don't know about you, but the idea of a bacon and egg quesadilla at midnight sounds kind of fabulous to me.

Here's another entry for Team Unusual Breakfast Hours (as opposed to Team All-Day Breakfast Hours): Texas-based burger joint Whataburger offers breakfast from 11PM to 11AM. Biscuits feature prominently on the menu, but you can get pretty much everything from a breakfast burrito to pancakes if you want. Go nuts.