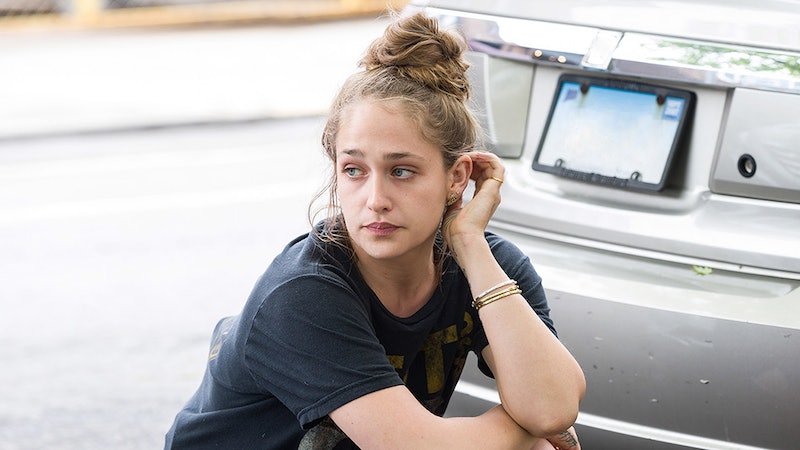 Ten years ago, I thought I would be a teacher. You know how I know that for a fact? My seventh grade teacher made us write letters to our 18-year-old selves, which she sent us the week of our high school graduation. Well, I've got a few choice words for 13-year-old me: You were one ambitious little babe. In that letter, I was pretty much sure I was gonna go to Harvard, become either a teacher or a doctor, break the six-minute mile time I was so close to back then (HAHA, oh puberty), and basically grow up to be a boss.

And I did, in a way. I would say my adult life is decidedly boss-scented thus far. I'm kind of a boss—just certainly not the boss that I expected.

Getting that letter in the mail was probably one of the worst days of my life. College admissions were not kind to me. My senior year, I decided to take a risk and apply almost solely to musical theater schools, which I was unanimously rejected from after spending an entire semester auditioning up and down the east coast. Even my back-up plans had fallen through. I was further from figuring out who I wanted to be than ever. Let's just say I spent an embarrassing number of hours openly weeping to Miley Cyrus's "The Climb". It wasn't pretty.

Ever since then, I have lived in a constant state of, "Wow, if you'd told me a year ago that this is where I would be, I'd have punched you in the face." My dreams have changed drastically in the course of the past five years. For a year, I was certain I was going to run my own daycare. For another year, I determined I'd go to grad school for psychology and commit myself to researching adolescent development. The year after that, I pulled a total one-eighty and moved to Nashville to be a singer/songwriter, and the year after that, I was bottomed out, living at home, and working a bottom-level office job I loathed. Nothing about the course of my life makes sense, and yet somehow, that always made sense. The not knowing. The uncertainty and unpredictability.

I'm very happy with where I am right now, in a job I never saw for myself and love more than anything, so I feel lucky for that. Obviously, I am not a doctor or a five-minute mile runner, so 13-year-old me was about as far off-base as most 13-year-old's are when it comes to the shape of their futures. But the older, slightly wiser me now acknowledges that the only real thing I know about what I want out of life is that I don't really have any idea what I want out of life. It took a long time to get there, but once you reach this point of acceptance—that life is random and messy and that only by being open to anything can you ever let wonderful things happen to you—a lot of things in your life get easier:

As a kid and well into my teens, I had a weirdly specific idea in my head of when things were going to happen for me. It seemed very logical to me, for some reason, that I would be married at 26, start having kids by 28, and stop after precisely four of them. I gave literally no consideration to my hypothetical career, which is hilarious to me now, because my job is pretty much my favorite thing and even the idea of dating someone right now annoys me. (I HAVE IMPORTANT THINGS TO DO.) It's funny how when you just sort of accept that your life is not going to go according to plan, the plan just sort of dissolves and becomes something you genuinely laugh about. I'm sure all that stuff is going to happen for me one day, but if it happens the way my teenage self decreed it, it will be a happy accident. Now the stress I used to feel about trying to stick to that arbitrary timeline is completely nonexistent, and it lets me enjoy the little milestones in my life and the time in between them that much more.

You feel much more free to explore your options

I feel like we are all somewhat guilty of putting ourselves in boxes, and forcing ourselves to become victims of our own youthful certainty. We pick something we love at the time—a job or a city or a person—and we say that is The Thing we are going to love forever. Doing so gives us a sense of purpose and identity at the time, but in the long run, it just ends up limiting us. People who are comforting living without the security offered by a false, fleeting sense of certainty are the same people who are more likely the be happy because they're open to whatever feels right as they grow and move forward.

For a long time I was The Singer, and then when that didn't work out I was The Caregiver, and so on and so forth. Adopting a new identity meant shedding the other one entirely. There was never any room for me to be fully pursue more than one thing, because that would mean I was only half-assing them all, right? Wrroooonnng. I was always so afraid of being all over the place, but accepting the fact that humans are just kind of meant to be that way has made me feel significantly less guilt about pursuing my passions, no matter how irrelevant to my goals they are. I find that even the things that you think have nothing to do with what you "want" in life end up having everything to do with it. I'm a firm believer in chasing after whatever makes you happy. If there's a way to make a living off it, then good on you — but either way, you're lucky to have something that makes you happy, and shouldn't deny yourself that feeling no matter how "unproductive" it seems.

You make better friends, and more of them

Here's the thing: If you pretend like you have life totally figured out, you're going to miss out on all the juicy, delicious bonding that can happen between people who relate about having NO idea what they're doing. It's easy to feel like we are all in this isolated bubble of panic, particularly in these two cases:

But it turns out, that is happening to most, if not all, humans in the world, all the time. It is a rare exception if someone knows what they want to do, is super great at it, and have already had all their dreams come true (looking at you, Taylor Swift). Even the people it does happen to had to struggle to get there and still experience plenty of self-doubt. We're all just floundering and confused and brand new at being on the planet. The fact that we all have that in common makes it a lot easier to forge even the unlikeliest kinds of friendships that you'll have for life.

You understand yourself a lot better

Deciding what I "wanted" in life was comforting when I did it because it gave me some definition of who I was. It was an external and convenient way of defining myself. But once you let that idea go, you have to look so much further inward to figure out what kind of person you are, without labels or self-identifiers or past failures and successes to define you. There are some things I was surprised to find out about myself—and not all of them were pleasant. There were periods that I realized I was not a "hard worker" anymore, even though I'd always defined myself that way. It was hard to accept but it motivated me to change. There were periods I realized I was being a huge whiner about things being beyond my control, when I might have taken the opportunity to embrace it instead. I know my weaknesses now better than ever, and feel a lot more equipped to make decisions for myself as I am right now, and not for the person I think I want to be someday.

You handle setbacks and disappointment a lot better than other people

When there isn't One Thing you have to be, do or die, then it doesn't feel like your whole life has gone up in flames when you don't get something you want. I have learned in some of the most brutal ways that just because something is your "dream" doesn't mean that it was meant to happen; Sometimes the things that you "dream" for are, in fact, completely wrong for you. And when you have this kind of perspective, you realize that just because you sucked at one thing doesn't mean there aren't a bajillion other things you don't suck at, things that could make you even happier.

You're much more open to change

I have bounced back and forth between cities in the past few years of my life like a drunk ping pong ball. Not knowing what you want means you are completely untethered and ready for whatever opportunities life throws at you. I've made a few moves in my life that might have seemed reckless to me when I was younger, but now that I've fully accepted that I don't know what I want, I'm so much more welcoming of weird plot twists sending me in different directions. That's when you get a real glimpse of all the crazy things the world has to offer.

You actually know how to listen to other people

I'm always asking people for advice, always watching the way their eyes light up when they are really passionate about something. I think that's all we can really hope for in life, is to be able to do something that we get a little manic with happiness when we talk about. Listening to other people's experiences gave me that measure of what my only true goal was: to be just as happy as they were and whatever I did.

You know how to trust your gut

People who stick to a rigid timeline, who think they have life totally figured out, spend so much of their lives listening to the cold, sterile road map they've laid out that they never learn how to listen to their instincts. Instincts, in turns out, as a "use it or lose it" deal: If you don't practice letting your gut be your guide often enough, you won't know how to do so when you really need it. People who are accepting of the messiness and uncertainty of their lives REALLY know how to do this—which turns out to be nothing but a strength.

Everybody has huge crossroads in their lives when an opportunity is presented to them, but there is a huge difference between making a decision that is logical and making one that feels right. Even in the past year, I have made some decisions and turned down opportunities some people would balk at, to pursue ones that they didn't understand. It'll always be hard to explain to people who don't share your perspective why you do or don't do certain things in your life. Maybe it's hard even to explain it to yourself. But when you've completely opened yourself up to the crazy infinity of possibilities, you don't feel the need to justify yourself when you make decisions based on what feels right. You know what's best for you, even if you don't have a clear sense of who you are just yet.