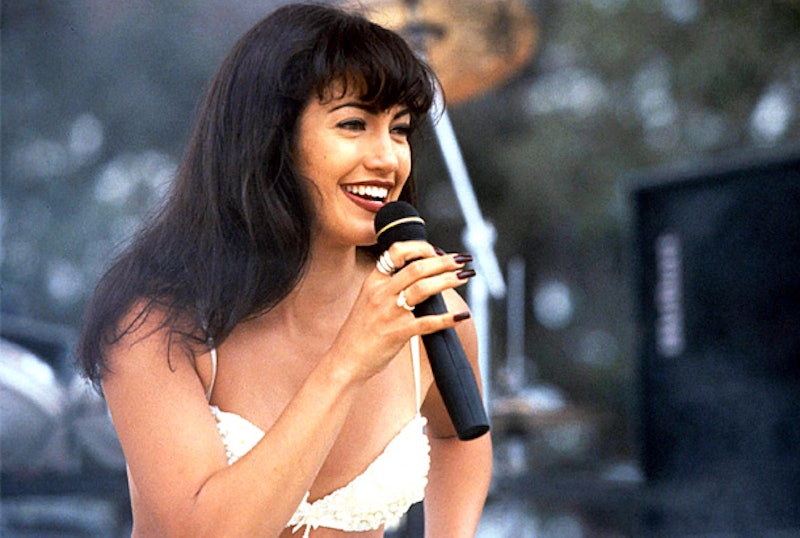 The first time I ever saw Jennifer Lopez was in 1997's Selena , the breakthrough biopic role where she portrayed the late Latin artist. I remember watching the movie with my mom, who was a fan of Selena Quintanilla's music, and dancing around for half the movie before being devastated by the tragic ending. Since I wasn't told the story beforehand, it was a shock when she was murdered, and those images from the film still stick with me as much as J.Lo's incredible portrayal of the talented singer-songwriter.

March 31 marks the 20-year anniversary of Selena's 1995 death, which has us thinking back to some of her best performances. Since there are a limited amount of videos readily available of the late singer, today is also the perfect day to re-watch Selena. (Unfortunately, it isn't streaming on Netflix or Amazon Prime, but you can rent it for $2.99 on most major platforms like iTunes and Google Play.) Lopez may have been lip synching Selena's songs, but she still embodies the role so that you truly feel like you're there with her from her rise to fame to the tragically-early end of her life. Plus, the outfits in every scene are on point, so the movie is worth re-visiting for them alone.

First Off, Her Outfits

She set trends decades before Rihanna was wearing bejeweled bras or Ilana rocked strappy ones on Broad City.

This is a GIF of the real Selena. They look nearly identical.

She Holds Her Own As A Powerful Woman

Such an empowering figure for young women.

And She Stood Up For Herself Against Racist Stereotypes

There is a very Pretty Woman moment when the salesperson tells her she wouldn't be "interested" because it's an $800 dress — and then she finds out who Selena really is.

There were some rough patches, but they ended up happily married.

She Was The Original Jennifer Lawrence

She loves pizza as much as you do.

More like this
Jennifer Coolidge Recites “Jenny From The Block” Beside J.Lo In Her First TikTok
By Jake Viswanath
Alicia Silverstone Revives Her 'Clueless' Character In This Super Bowl Commercial
By Jake Viswanath
12 Years Ago, Austin Butler Manifested His Oscar Nom In This Disney Movie Scene
By Jake Viswanath
Sandra Bullock’s Razzies Speech Proves She’s The Ultimate Miss Congeniality
By Sam Ramsden
Get Even More From Bustle — Sign Up For The Newsletter
From hair trends to relationship advice, our daily newsletter has everything you need to sound like a person who’s on TikTok, even if you aren’t.