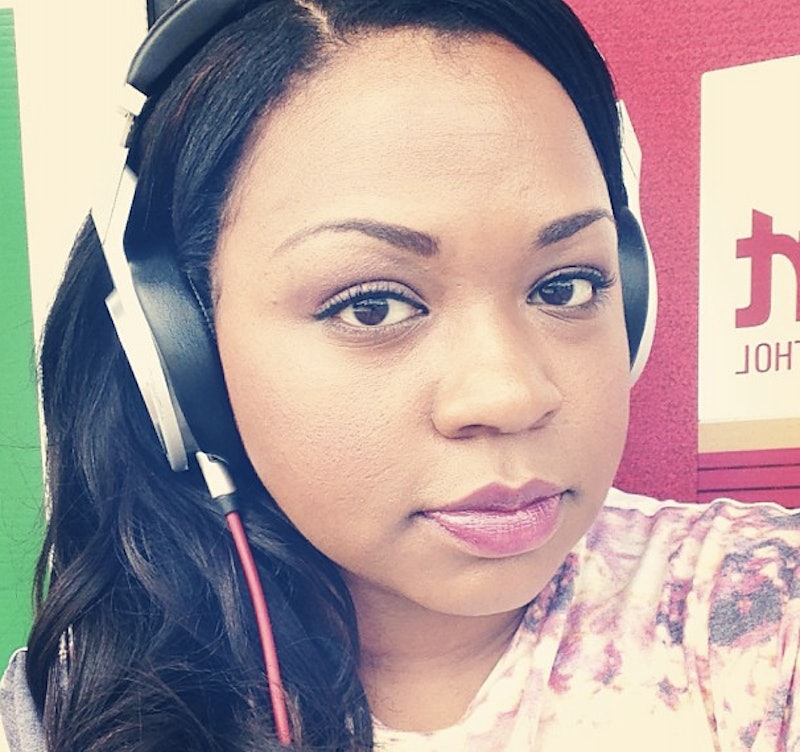 #TIDALforALL? Nah, I say podcasts for all. Over the past few years, podcasts have slowly but surely taken up the time I usually spend listening to music, but since earlier this year, Chenjerai Kumanyika's piece on diversity in public radio has made me pay more attention to the voices of my podcast hosts.

Podcasts have recently risen in popularity, mostly thanks to big shows like Serial. Even with all its controversy, that podcast served to give more attention to the field as an innovative tool for sharing stories and news. Naturally, with more attention came more scrutiny. In the world of podcasts, that meant an analysis of the kinds of voices that typically dominate podcasts and radio: white and male ones.

The critique of the male-dominated podcast world isn't new, but analyzing podcasting through the lens of race sheds new light on the industry. It raises issues of how we perceive whiteness, and white voices, as neutral, while we view things discussed by people of color as issues pertaining to or only important to people of color. As Kumanyika said in his essay, "When the vocal patterns of a narrow range of ethnicities quietly becomes the standard sound of a genre, we’re missing out on essential cultural information. We’re missing out on the joyful, tragic, moments and unique dispositions that are encoded in different traditions of oratory."

I’ve been a long-time listener of one of the most popular podcasts out there, This American Life, and through that I've also begun listening to Snap Judgment and Serial. Thanks to Kumanyika's words, and a general desire to replace my consumption of white male voices in media with other voices, I’ve been making a concentrated effort to seek out women and people of color in new podcasts. It’s a similar to my goal to only read books by writers of color this year, but since I’ve had less exposure to podcasts, I’m allowing myself more flexibility in this area. Plus, I’ve got a certain soft spot for Ira Glass’s, um, interesting radio voice.

Over the last few months, I've been lucky enough to listen to many new podcasts hosted or co-hosted by women of color. Here are six of my favorites.

1. The Read – Hosted by Kid Fury and Crissle

This might be the most popular podcast on the list, as well as the most NSFW. It's also the only one that has a male co-host. Kid Fury, a popular blogger and Youtuber, and Crissle, a writer, both hail from the South and are currently based in New York. Together, they make a hilarious duo. I started listening to them while I was living in South Korea, and hearing two opinionated black voices discuss American pop culture and racial issues, in a frank and hilariously profane way, filled a void of homesickness that I hadn’t even known I had until my first listen. In their latest episode they tackled the fading legacy of Iggy Azalea and that terrible Deadline article about "ethnic" casting.

Everything you need to know about the podcast is in the title. It’s four amazing black women getting together to talk about pop culture through the lens of the representation (or lack of) black women in media. With their backgrounds — Alesia's in non-profit, Aurelia's with screen and stage performance, and Fatima and Ramou are in writing — they offer a variety of outlooks on what's going on in film, television, and online. I came for the topics, and I stayed for the giggling fits of laughter that often punctuate their on-point assessments. Listening to them is like listening in on a conversation of girlfriends who are smarter than you.

This podcast is one of the newest on my list and unlike The Read and Black Girls Talking, I haven’t been with them from the beginning. I’ve only been listening to the podcast for the past few weeks, but I’m hooked. Zeba and Fariha are both writers who offer an interesting take on pop culture news. In their latest episode they discussed Zayn leaving One Direction, but approached it from unique the angle of what it means to be part of a community that puts pressure on you to exist in strict limits.

4. Another Round – Hosted by Tracy and Heben

Tracy and Heben are two of my favorite Buzzfeed writers and they’ve brought some of their writing and all of their wit with them for the podcast. In the latest episode, Heben read some of her “White People Origin Stories” and they talked with Jazmine Hughes of the Hairpin. Plus, the ladies are drinking throughout the podcast (it’s called Another Round for a reason), so things usually get pretty interesting toward the end. Bonus: Their episodes drop on Tuesday, so that means, yes, episode three is out today!

5. The Back Talk — Britt Julious

Britt is a writer and essayist who often writes about music and identity. With The Back Talk, she's ties in music with essays and interviews about and from other women of color from around the country. Her latest episode, "Naomi Campbell Walks," focused on confidence and touched on how so many women are still struggling with theirs.

This is the podcast that I’ve listened to the least (because they’re currently one episode out) but that I’m looking forward to listening to the most. The solo episode is over an hour long, but it’s a conversation in which Ayesha, editor-in-chief of The New Inquiry, and Ezra Koenig, Vampire Weekend's frontman, discuss race, culture, and music, especially through critiques of Vampire Weekend’s prep aesthetic. I didn’t think I would be into listening to Ezra Koenig talk about race, but I was enthralled. I’m not sure what Ayesha has planned for the next episode, but I'm looking forward to more of her confident and insightful analyses.