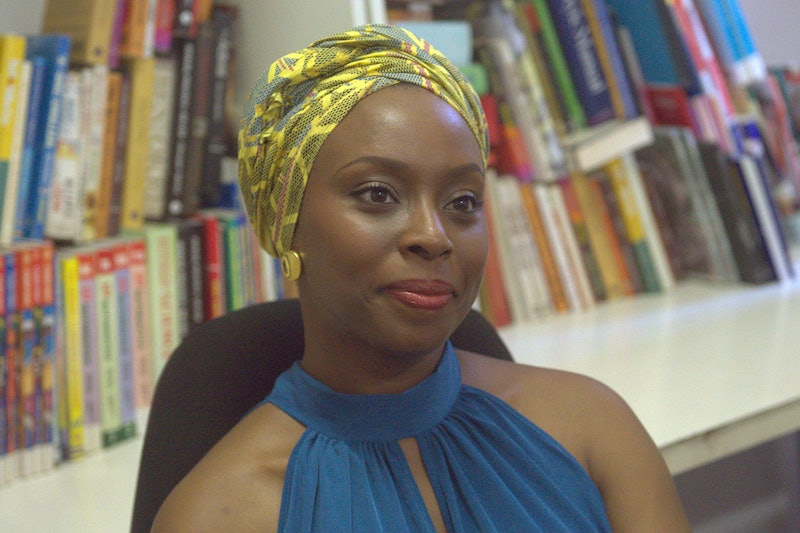 Last year, when the Book Expo America conference announced a lineup of all white children's and YA writers, backlash from writers and readers was swift and justified: they were outraged. For years, those who work with, read, and write books have been talking about the lack of diversity in the literary industry, but the lineup sparked an entire movement: #WeNeedDiverseBooks. It began as a hashtag on Twitter, and turned into a full-on organization.

The message of the movement has grown from calling out the frustrating lack of racial diversity at a book conference (30 white writers and a cat, but no people of color, really?) to addressing the larger issue of representation throughout the industry. According to their website, the mission of #WeNeedDiverseBooks is to “promote or amplify diversification efforts and increase visibility for diverse books and authors, with a goal of empowering a wide range of readers in the process.”

When I learned of the campaign and the reason for it, I wasn't surprised. It's always been obvious to me that the literary industry was heavily biased. I'd known it, but never given it much thought. As the movement grew, I started thinking more about my own relationship with books. They've been an important part of my personal growth, but how had diversity (or lack thereof) in the books that I've read affected me?

Over time, I've realized that reading about primarily white protagonists has limited how I've thought of myself and the world. Reading from one perspective has become formulaic, especially within YA, fantasy, and science fiction. There's more to literature than what I've been reading, and if I can't depend on the book industry to guide me to them, then I'll take my own path to find it. This year, I'm only reading books by writers of color. Here's why:

As I Child, I Didn't Know I Could Be a Protagonist

Before #WeNeedDiverseBooks, I just read whatever fiction was available on library shelves. This means I was frequently guided to white authors. This didn’t bother me too much until I looked back at my childhood and remembered that I used to not know that people of color could be protagonists. When I imagined the characters of the stories I wanted to tell, they were as vaguely “ethnic” as possible. I wanted my characters to be black, but didn't think it could be done because I had encountered it in literature so infrequently. I talk about how important representation is in media because I know how much it would have meant to me when I was younger.

I know how much it means to me now. Childhood is difficult, but so is adulthood. We want to see ourselves in media because it helps us know our experiences and feelings are valid. There was a surreal moment of listening to Americanah while I was living in South Korea and the characters began talking about traveling while black. Even as my non-black friends in Korea didn't seem to understand some of my frustrations, there were these rich, expressive fictional characters giving voice to my feelings. In a way, I was finally a protagonist, and it meant the world to me at the moment. Not only would I like to keep experiencing that feeling, but I'd like to keep seeing the world through the eyes of other protagonists of color, and not just the white ones that I'd been gazing through for years.

Underdeveloped Representation Isn't Worth It To Me

Before this year, I'd already began looking for books with protagonists of color, and that often meant that the writers were also people of color. When I stumbled upon books by white authors that had people of color, I was usually extra pleased by it. I now see that as evidence of an inferior train of thought that took pleasure in white people finding us interesting enough to write about. It's cringeworthy, I know. I felt this way until I read a book by a white author that horrified me with its portrayal of Nigeria and Nigerians. The civil unrest in Nigeria that this book featured didn’t seem based on the reality of Nigeria’s past or present. It instead read like a typical sensationalized and stereotypical view of “Africa the country” with its senseless African wars and barbarianism. I knew that this book, which had been heavily recommended, was going to be what most Americans would know about Nigerians and Nigeria, and that frustrated me.

I've read the concerns of other people of color as they discuss how their culture or race is inaccurately represented in books by white writers. Roxane Gay recently wrote a review of Joyce Carol Oates’ The Sacrifice in which she discusses the lack of empathy that left the book with underdeveloped and eventually offensive black characters. What is the point of celebrating white authors writing about people of color if their work does more harm than good? That’s not to say that white writers always get people of color “wrong,” but I would much rather celebrate people of color writing their own stories than giving white writers credit for trying to write them. I don't just want to read about people of color who aren't based on any sort of reality and just embody stereotypes — we've got enough of that already. I want to see people of color written as the complicated, dynamic, ever-evolving humans we are. For now, I'm going to trust writers of color to do that.

There's So Much I Want To Learn From Writers Of Color

As I grown as a person, I’ve found that it’s up to me to work on unlearning some of the more harmful things that society has taught me. Although the national #WeNeedDiverseBooks movement is about changing the books industry, my personal movement is about changing myself. Just as I've learned to value myself as black woman, I have unlearned the belief that people like me are not worthy protagonists. I am still unlearning the habit of praising white people for deigning to do what people of color have already been doing. As I'm figuring out what's important to me, I'm spreading my horizons to include other perspectives.

As I add more books to my reading list for this year, I’m both excited and depressed by the sheer amount of options I have, because it’s indicative of all I’ve been missing out on. I want to read grow as a feminist, so I'm eager to read Sister Citizen and Talking Back. There's so much I want to know about the black lives around the world that I know The New Jim Crow and Of Africa are just the tip of the iceberg. I know very little about Asian and Asian-American culture, so I wonder what I can learn from books such as The Garden of Evening Mists and A Tale For The Time Being . And of course, I'll never stop loving fantasy and science fiction so I can't wait to explore these genres from the POC perspectives in Wizard of the Crow and Sultana's Dream. You get the point. I doubt a year will be enough to make up for a lifetime of looking at world from one perspective, but at the very least, a year is a step in the right direction.

The Industry Just Isn't Changing Quickly Enough For Me

After the past year of the #WeNeedDiverseBooks campaign, I don’t think that the book industry has learned its lesson about ignoring writers of color. I wish I could read more book lists, walk into more libraries, or attend more festivals that promoted books by writers of color just as much as those by white writers, but I don’t think that will be the case anytime soon. So this year, I'm not counting on the industry anymore.

For now, at the beginning of the year, the process has been an easy one. There's a backlog of popular books by writers of color (see above) that I'm still working through. But I know that as the year goes on, keeping up my reading goal will require more personal investments. There isn't a shortage of wonderful books by writers of color, but sadly their availability is lacking in the public libraries I used to depend on. This year, I'll be spending more on books than I have in a long time, but at least I know it's a worthwhile investment.