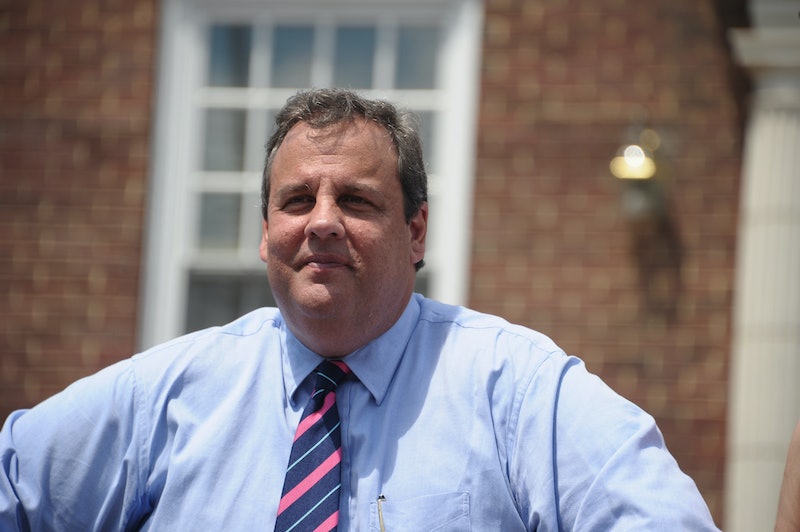 If the National Organization for Marriage is to be believed, New Jersey governor Chris Christie is a man who lacks courage and convictions. Or, “the courage of his supposed convictions.” But that’s splitting hairs, really; the point is that he’s apparently a wuss for letting gay couples get married. The Garden State-based org isn’t happy that New Jersey became the 14th state to embrace equality for same-sex couples — or as they put it, “same-sex ‘marriage.’” (What’s fake or air-quote worthy about a very real concept remains to be seen.)

"It's a sad day for the voters of New Jersey," said the group’s president, Brian Brown, who is apparently on a break from lobbying for anti-gay laws in Russia. "An activist judiciary has once again imposed its views and ignored the rights of voters.” Never mind the fact that the state legislature OK’d gay marriage before a court ruled that it had to start — it’s not like they’re elected representatives of the people in our government or anything.

Mind you, Chris Christie isn’t switching teams. After dropping his suit to block marriage equality, Christie’s spokesperson said that, “although the governor strongly disagrees with the court substituting its judgment for the constitutional process of the elected branches or a vote of the people, the court has now spoken clearly as to their view of the New Jersey Constitution and, therefore, same-sex marriage is the law. The governor will do his constitutional duty and ensure his administration enforces the law as dictated by the New Jersey Supreme Court.” Hardly a strong endorsement.

But the key phrase is the last sentence of NOM’s Monday press release: “[Christie’s] surrender on marriage effectively surrenders any chance he might have had to secure the GOP nomination for president.” Now that’s what everything in Republican politics is currently about.

NOM isn’t worried that Christie screwed his chances at a presidential run or that he might not get demolished in Republican primaries by Ted Cruz. They’re worried about the opposite: that Chris Christie may be the first viable Republican presidential candidate to be warming up to — or easing up on opposition to — gay marriage. And that means they’re toast.

Which they are. A Quinnipiac poll over the summer found that Republicans are almost evenly split over the issue of federal benefits for gay couples, and in September, a national poll for Bloomberg found that 55 percent of Americans want their gay and lesbian friends to be able to marry. NOM is increasingly irrelevant in the grand scheme of things, and Christie’s acceptance of defeat may signal their drop in the Republican Party, too.

After all, Christie’s no savior for the Republicans, nor is he a standout politician. He was lukewarmly endorsed by the editorial board of the Newark Star-Ledger over Democratic opponent Barbara Buono on Sunday, with the paper noting that, “you have to conclude he is much better at politics than he is at governing.” They called Christie “overrated,” with spin “way ahead of his substance.” It was less of a pro-Christie message than an “anyone-but-Buono” one, though the editorial board noted that marriage equality was one of the few issues where they’d side with Buono over Christie.

NOM is probably right — it’s questionable whether Christie has courage, or convictions. Then again, the same can be said for most people running for public office. Courage and convictions are not, unfortunately, traits that win elections. But Christie is likeable: he’s someone people who Average Joe wants to invite over for a few beers and a football game. And Christie realizes that increasingly, one of the other guys downing wings and warm PBR is Average Joe’s gay friend.

Christie would never win the hardcore right against a Ted Cruz-type anyway, or NOM's vision of mainstream America. But this one action — more accurately, inaction — on gay marriage might help him capture the middle voters drawn by his charm.

More like this
Prince William Condemns “Unacceptable” Comments Made To A Black Guest At Buckingham Palace
By Shahed Ezaydi
Matt Hancock Broke a Major Rule With I’m A Celeb
By El Hunt
Michelle Obama Opened Up About The "Discord And Discomfort" Of Marriage
By Stephanie Topacio Long
Marcus Mumford, Open Book
By Ilana Kaplan
Get Even More From Bustle — Sign Up For The Newsletter