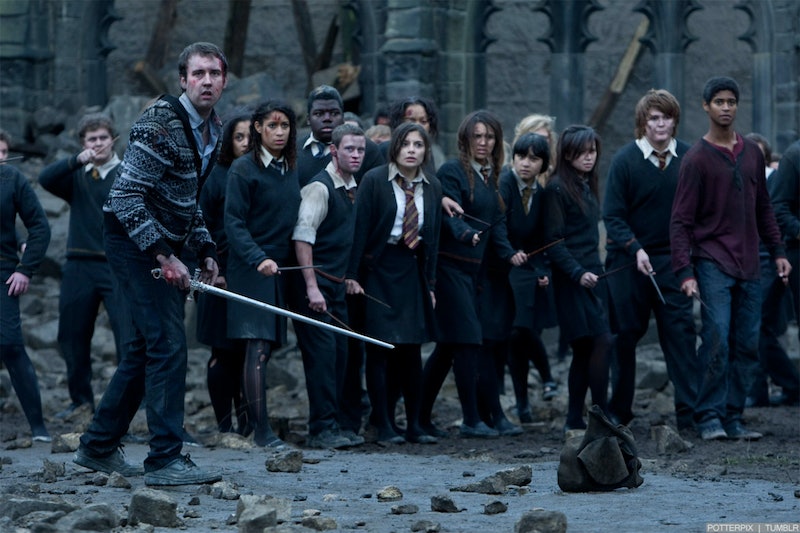 Harry Potter and the Deathly Hallows came out a month after I'd turned 17. I literally grew up with these books (you won't judge me, I hope, for shedding some tears as I write this), and finishing the series was the signifier of a seminal era coming to an end. For the first time, I went to a midnight release party, driving with a friend to wait in a long line outside a makeshift shack where we joined Harry Potter fans dressed up as characters. Together, we all talked about how this was the end, the last book. This was it.

We all knew we were in for a tough ride when we got our hands on Deathly Hallows. We knew it would be different than all of the other books because our characters wouldn't be attending Hogwarts. We knew that there was serious danger lurking around every corner. And we knew that whatever happened, lots of people were going to die first.

When I got home, around 1 a.m., with the book clutched to my chest (and another copy for my brother to read simultaneously), I was scared to open it. Because I knew that the moment I did, I wouldn't be able to stop until I reached the end. And I wasn't, and still am not, over the fact that it all ended. These were my reactions to the ultimate, final, incredible book in the truly groundbreaking success that was the Harry Potter series.

There is a very Darth Vader-ish feel to Voldemort and his minions sitting around a table in the Malfoy manor, planning to kill Harry Potter once and for all.

Harry actually says his goodbyes to the Dursleys in a surprisingly affectionate way (as affectionate as the Dursleys could ever be). Dudley in particular is the one that surprises us all with his big handshake.

So many Harry Potters in one room! So many of them are naked at some point or another! Hilarious.

Very, very, very scared, in fact. Even though there was a whole cloak-and-dagger thing about getting Harry away at a different time than the expected one, the Death Eaters are onto them and Hedwig dies in the battle.

Come ON, already! While I love a good wedding scene and all, it's excruciating to wait with Harry, Ron, and Hermione as they stay around the Burrow. They do meet Luna Lovegood's father, though, who's an interesting character, and begin to wonder about that weird symbol thing. PLUS, Ginny totally plans to sleep with Harry on his birthday but Ron the dummy interrupts so sex does not happen. (The Burrow seriously needs more locks on its doors.) Dumbledore's will bequeaths items to Harry, Ron, and Hermione, all of which seem useless at the time, of course. Which is also kind of maddening.

Nobody really knows what they're doing. Rita Skeeter is writing terrible things about Albus Dumbledore that are ruining Harry's belief in him, and Kreacher suddenly decides to tell Harry, Ron, and Hermione everything about the Black family and that he's now super loyal to Harry.

They're going to break into the Ministry of Magic. This is so cool. And so insanely nuts. But hey, they manage! They get the damn locket from Umbridge! The locket that is a Horcrux!

Now they're all tramping through the countryside and not really doing anything, and they find out that Gryffindor's sword is missing and that they'll never be able to find it, and Ron, who's been wearing the locket (they've been taking turns, and it's rather like the LotR's ring, where it makes the person who wears it act like an asshat), decides to ditch Harry and Hermione. It hurts so much to think of that abandonment that it still gets me right in the belly.

Harry and Hermione are close and try to make one another feel better. They go to Godric's Hollow on Christmas and for the first time Harry sees his parents' grave, plus a magical statue dedicated to them that only wizards can see.

Of course, no sweet moments last for long, and soon enough there's a snake attack (Nagini living in Bathilda Bagshot's body, how creepy is that?) and then, of course, Harry has to go and read the damn biography that Rita Skeeter wrote about Dumbledore and discover that he used to be friends with this guy who became his greatest enemy (and that's a whole other gay love story that I wish J. K. Rowling would write). And some of the things Dumbledore used to believe sound very scarily like Nazi propaganda.

Ron comes back, the sword is found, and the damn locket is destroyed. And it seems the trio is finally on track, going to Luna Lovegood's place, seeing her room (which is heartbreaking) and hearing the Tale of the Three Brothers and the Deathly Hallows — a wand, an invisibility cloak, and a resurrection stone.

Harry, Ron, and Hermione are all caught and thrown into a cell in Malfoy Manor, though they don't recognize Harry yet (Hermione was smart enough to blast his face and make it look all stretched and weird and, well, un-Harry-ish). Dobby saves everyone, but he dies, and it's painful. Another death. I can tell there are going to be more, but still. Each one hurts. And breaking into Gringott's? Yeah, that's also pretty panic inducing, especially with a goblin who really doesn't like humans. And then a dragon flying them out? Well, that's super-safe. Mhmm. I'm not at all jittery from the too-much-coffee-I'm-drinking-to-get-through-this-book.

They're going back to Hogwarts to try to find one of the last of the Horcruxes. This is going to be big, and dramatic, and the Battle of Hogwarts is finally upon us, but after everything we've gone through up to this point, we're ready for what's coming. We have to be. Either Harry's going to die, or he won't.

Snape was still working to protect Harry, all this time. Still a double agent to the end. His only hatred of Harry came from his despising his father, the man who won Lily, whom Snape loved. The tragedy of Snape's tortured life comes to an end.

Harry is a Horcrux. Harry is dead. But Harry is not dead. Or he is. Or he isn't. And Dumbledore's dead? But he isn't? And they're at King's Cross? Heaven is a train station? Oh, wait, no.

Harry is NOT dead. Malfoy's mom is seriously a good mom despite her son's idiocy, and she lies that Harry is dead in return for a confirmation that her son is alive. Harry is carried back to Hogwarts. But he's not dead. Neville kills Nagini, the last Horcrux, and Harry kills Voldemort. And that's that. The good guys win.

And 19 years later, the trio we've known and loved for so long are alive, well, have children, and no matter what anyone says to the contrary, this chapter is canon, and is beautiful. I cry every time. I can't help it. So call me a sap. Go ahead. Try being in love with a book series for almost 16 years and tell me that you wouldn't cry. (You're totally crying, too, aren't you?)