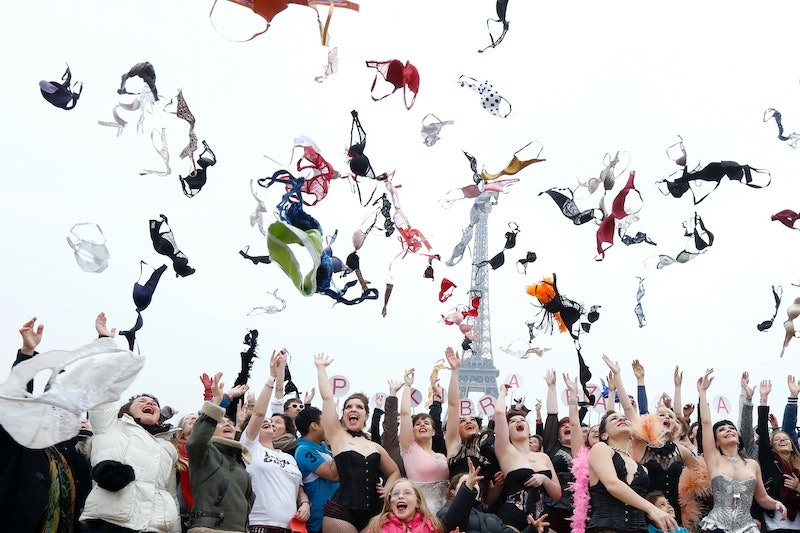 Growing older has been the best thing that could ever happen to my boobs. They’re finally getting the accolades they've long deserved. If I had a dollar for every time I experienced a negative emotion about my small chest during my teenage years, I’d be dancing to the Greenback Boogie while dolla dolla bills fluttered around my head. Youth is a turbulent time and a set of small breasts are a highly visible indicator that you are (or at least you will definitely feel that you are) in the minority — it’s not a winning combination to inspire self-confidence.

Teenagers are notoriously self-conscious, self-deprecating and self-obsessed. I mean, let's not try to deny it—we all were. It's a generalization to say so, but I was a teenager not so very long ago that I can't speak fairly authoritatively on the subject. When we're young, we're all about ourselves, and are notoriously hard on ourselves while we're at it. Having small breasts in high school was, in my mind at least, a disaster of epic proportions. “When will they grow?” I silently queried daily, while wondering why this travesty had befallen me. "I must, I must, I must increase my bust." That mantra has been a staple of meager-breasted adolescence for so many decades because the universal fact remains: When you're young, having big boobs is one of the only quantifiable, visible markers of growing up. And, there's nothing we want more when we're teenagers than to be a self-sufficient adult, and all that comes with it. So when the boobies don't come, we're left wanting desperately for them.

The best part about reaching my mid-twenties? I'm rolling in self-confidence at this point. I don’t care about my breast size anymore, or pretty much any other specific physical attribute for that matter. The most wonderful realization of all is this: Other people don’t care that much about my boobs either. In fact, most people probably aren't thinking or saying anything about me at all. I've found self-consciousness dissolves bit by bit as you age. You come to see brand new depth and nuance to your identity, and even your physical beauty, which liberates you from being chained to a tragically small list of "good" qualities to have. As you get older, you learn there's a hell of a lot more that is considered sexy than thick curves held together by a tiny waist. You learn there's a lot more to being a woman than filling out a c-cup.

My newfound indifference has given me the chance to enjoy all the benefits of small boobs. Now I mock my inner teenager and wouldn't change a thing about my body.

1. I'm no longer mistaken for a prepubescent pre-teen

Being the not-so-proud owner of a AA cup at age 17 often left me in the awkward situation where I was mistaken quite frequently for a 13-year-old girl. I'm happy to say, at the "super old" age of 27, I'm still a AA, but I don’t even get ID'd at the liquor store any more. That’s a good sign, right? It’s a big boost to the self-confidence when you start looking like an adult. It makes it so much easier to love your tiny ta-tas when you no longer need them to validate your adult status. Like, I'm very clearly an adult, so there's no longer any room to erroneous place the blame on my boobs.

2. Not wearing a bra

Feminist bra-burning aside, it is really just about comfort and there are plenty of good reasons why we don't need bras. Bras can actually lead to neck and back pain and poor posture. Recently a French professor released a 15-year-long study which claims bras are a "false necessity" that actually prevent breasts from developing natural muscle tone. There's no good reason to strap an extra layer of underwire wrapped in cotton to your body if your boobs stay afloat on their own. Sheer tops are generally out of the question though, unless you feel like offering a public peep show (in which case, do you, friend).

When I went through a braless phase in college I had no idea my experiment was so backed up by science, but at the time, I swore up and down that a bra would never grace my skin again. Even to do this day, I often ditch my bra during hot summer weather. I'm aware that my more ample-chested friends don't have the luxury of doing this as easily, and the privilege isn't lost on me.

3. I can finally enjoy all the perks of being small-chested

You know, perks: No one notices anything is amiss when your bathing suit gets washed off by a vigorous wave; People actually look at your face for lack of cleavage entertainment; Buttons don't pop off your button-down shirts; It's easier to detect breast cancer lumps; You have all-around better posture. There are really so many upsides to small breasts, you guys.

Wrinkles might be on my 10-year horizon, but sagging doesn't concern me too much. Don't get me wrong: I'm not delusional. I know all tissue loses elasticity over time, and that breasts, small or large, are no exception. A small bust just means my nipples won't be knocking at my knees anytime soon, and I'm not. mad. about it.

5. Boutique shopping has changed my life

A small cup size poses some of the same problems experienced by women with breasts at the opposite end of the spectrum. Most important among those issues: Getting things to fit. You might assume a AA cup would be readily available in every undergarment collection, but you’d be wrong, or it’s only available in a 32” and 34” band. Well gee golly whiz, what if I'm a 36” band?

The part-time, minimum wage job I held as a teen didn't really provide the cash flow required for shopping in luxury lingerie boutiques. Even if I’d had the funds, being 16 years old, I was lacking in the self-confidence required to waltz into such an establishment. Those days are long behind me. Not only do I now regularly enjoy the benefits of boutique lingerie shopping (beautiful bras, personalized service, complementary bra fittings on every visit—yes, please!), but I haven’t purchased a bra at the likes of Aerie in years. The day my breasts actually filled my bra cup was the equivalent of a #winatlife moment.

6. A bandeau is actually functional, rather than a curious piece of fabric

When you think about it, the bandeau is a pretty discriminatory fashion trend. It's basically a thin piece of elasticized fabric meant to cover, conceal and support all in one, all without straps, mind you. Really? Really?! As a small-chested woman, I get to partake in the world of bandeau swimwear, bandeau shirts and bandeau bras without any worries about wardrobe malfunction. Please forgive me the small pockets of happiness I find and excuse me while I gleefully change into some bandeaus.

7. I have mastered the art of fake cleavage

Look, I'm not saying that people with small breasts should feel like they need to utilize wizardry to make they bust appear larger than life. I love the way my minor mammaries look in almost all settings. But whatever, I'm not ashamed to say that cleavage can look awesome sometimes. And younger me resented my little boobs for not quite making it happen. But now, I've got it covered, and it doesn't involve tissue stuffed in a bra. There's nothing better then living life without large breast-induced back pain, except maybe doing it with delightfully fake cleavage. The only reason I keep bronzer in my makeup bag is for magic breast illusions, a regular pre-bar ritual in college.

By now, you've probably read about cleavage contouring. While humorous to the nth degree and highly instructive, there’s an easier way to accomplish this goal. Okay, ready? Take cosmetic brush and bronzer palette in hand. Now apply to the barely there cleavage like you would your cheeks – that is to say brush it on. (Pro tip: Don’t forget to do this topless or risk transforming your beautiful black v-neck into a glittery '90s throwback.)

Oh, are you waiting for the next step? Sorry, there isn't one. That's literally it.

8. No person has ever uttered the phrase “calm your tits” in my direction

If there was ever hate-worthy phrase, this would be it.

9. Exercise is never a logistical nightmare

I’ve become increasingly active and athletic as I plod on through my twenties. (I was once the little kid who picked daisies in the middle of the soccer field instead of playing, to give you some idea of where I'm starting from in terms of interest in physical activity.) Now, it’s finally dawned on me how lucky I am to have small breasts. How would you even do a proper medicine ball side twist with large boobs? And what about the bras? Finding the right sports bra is a science, requiring a lot of research, trial and error. Who has time for that? I barely have time to exercise as it is. If I had to start shopping for fancy high-tech undergarments I’d probably have to give up something more important, like Netflix binging or exercise itself.

10. I can sleep on my stomach and it’s amazing

While there are many reported drawbacks to sleeping on your stomach, anyone who has ever been pregnant will tell you there is little they value more than the ability to lay on their tummy in the comfort of their bed. When I was pregnant, I used to go to the beach and dig a hole in the sand for my belly, just for a chance to snooze on my stomach. Thankfully, pregnancy only lasts nine months, but big boobs are for life. If only I could go back in time and tell my insecure teenage self that she has years of small boob-loving, comfy stomach-sleeping, bandeau-wearing bliss ahead of her.