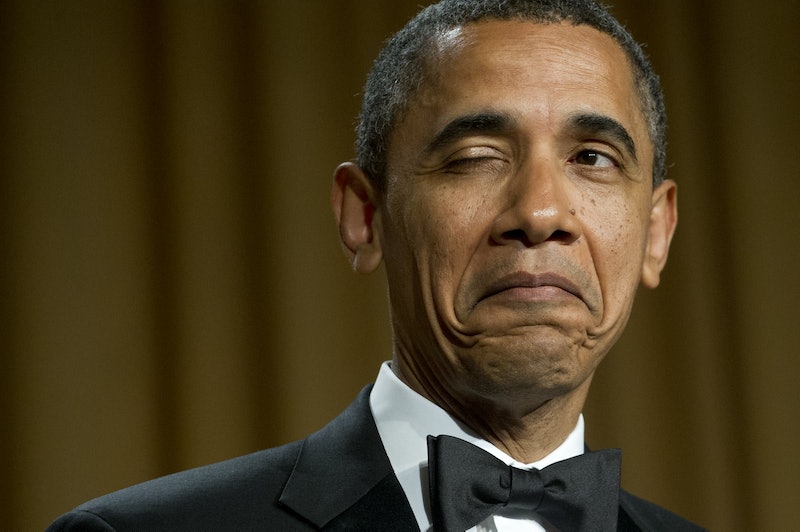 Be careful on April Fools', or any other day — you just never know what might be fake. Nobody is safe from pranks, not even politicians. Yeah, Washington might seem like a pretty serious place, but there's a history of political trickery among America's leaders; some bear the brunt of the tomfoolery, while others are the jokesters themselves. One thing is for sure — anything involving a politician is bound to become public and more than just a couple of people will end up laughing at political April Fools' jokes.

So, be warned, Congress: On Wednesday, you should be keeping an eye out for anything out of the ordinary. As for the rest of us — Sarah Palin, we're looking at you — it's a good idea to look at the date on the calendar if you see any politicians doing anything suspicious (spoiler alert: last year, there were some tattoos on a presidential candidate). Even our elected leaders are allowed to have a little bit of fun on April 1.

So let's take a look at some of the major political April Fools' jokes. Hey, you might even get a few ideas for next year.

Sarah Palin and the French President

In November 2008, Palin received a call from a fake Nicholas Sarkozy. The caller was Marc-Antoine Audette, a French-Canadian comedian. Under the auspices of the French president, he tried to relate to the VP nominee, who was mocked on SNL for seeing Russia from her house, saying "except from my house I can see Belgium."

This maybe should have been a tip-off that it was a hoax, but somehow it wasn't — the call lasted six minutes. Palin later said: "We can have a lot of fun together while we're getting work done. We could kill two birds with one stone." Audette responded with a request: "We could go try hunting by helicopter like you did."

Hail To The Chief

The joke was on the American public when Kid President starred in the White House April Fools' joke in 2013. The official Twitter account said: "At 10:00 a.m. ET, the White House will release a special video message from the President." Entering the video to "Hail to the Chief," the youthful politician proclaims: "I'm Kid President and I hope everyone has an awesome day!" Not quite who we were expecting.

In 1992, NPR reported that Richard Nixon was running for president as a Democrat. Nixon impersonator Rich Little was brought in to announce the campaign. The slogan? "I didn't do anything wrong, and I won't do it again." Listeners weren't impressed, with many calling in to express their displeasure.

Michele Bachmann's Got A Trick Up Her Sleeve

If you need an idea on an April Fools' prank for the home or the office, the former Congresswoman has a suggestion for you. All you need is a sink and the guts to do it.

During a Fox News appearance last year, Cruz debuted his fake tattoo in response to some California street art depicting him. He said: "Politics is a strange thing. It inspired me." He later added: "I'm proud to stand with Winston Churchill."