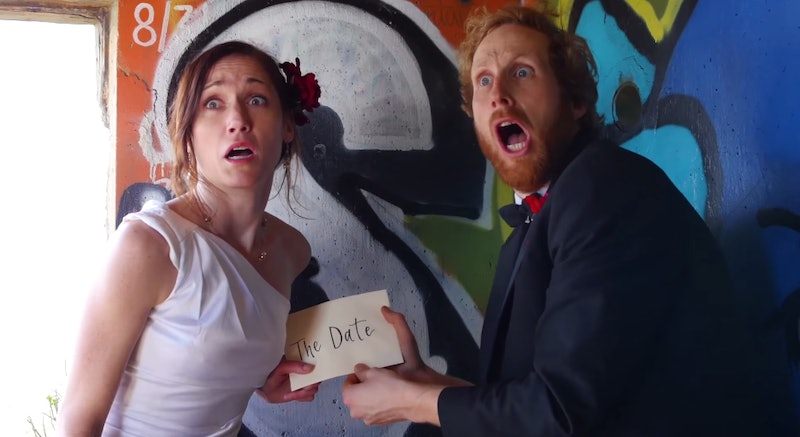 Hello, yes, I'd like to cancel my subscription to all of my friendships. It turns out the only friends I need are Kelly Hennigan and Tyler MacNiven, the couple who staged "Operation: Save The Date," a YouTube adventure that just took weddings to the next level. After watching this, I can truly say that my FOMO for missing this wedding is more real than missing Will and Kate's. (No, YOU'RE an outdated pop culture reference.) Really, though, if someone threw down the gauntlet on prolific wedding videos, it makes sense coming from Amazing Race season 9 winner, Tyler. Not only did he beat out all those teams, but he has walked the entire length of Japan, run across Iran for peace, and made award-winning film documentaries out of both of them. This video was just the icing on the wedding cake.

Congrats to Tyler for finding someone as hardcore as he is, because Kelly appear to kick some major ass. You don't wanna meet this bride-to-be in a dark alley, folks, cuz she doesn't have tricks up her sleeves—she's got them up ever single one of her limbs (no, really, just watch). The couple sets the scene for their 007-inspired video in the beautiful city of San Francisco, where they are on a mission to retrieve "important wedding documents" from a secret organization of hipster thugs. There is danger! Intrigue! CAKE! This is already better than any James Bond film I've ever seen.

Here is a peek into the harrowing adventure Kelly and Tyler took together, as they literally "saved" the date:

They braved the tides

Shot off their human garter gun

And protected it with one last clever fake-out

Let's be honest, guys, if there were bombs in cake, we'd all be dead by now. I'd personally be dead like 3,000 times over. But fortunately this story has a happy ending, one that will hopefully result in a cake without secret bombs installed.

Together they will create the next generation of CIA operatives and vigilante superheroes. Also, RIP, everybody else's "Save The Date." It is nothing compared to these heroics:

Congratulations, Kelly and Tyler! And thanks again for keeping the world safe from the nefarious wilderness goons of San Francisco.

More like this
17 Creative Bridal Shower Gift Ideas For Any Type Of Bride
By Marilyn La Jeunesse
The Best Time To Date After A Breakup, According To Experts
By Bustle Editors
I Tried The $20 TikTok Viral Oishii Strawberries — Here's What I Thought
By Sophie Hanson
TikTok Is In Its Elle Woods Era
By Meguire Hennes
Get Even More From Bustle — Sign Up For The Newsletter