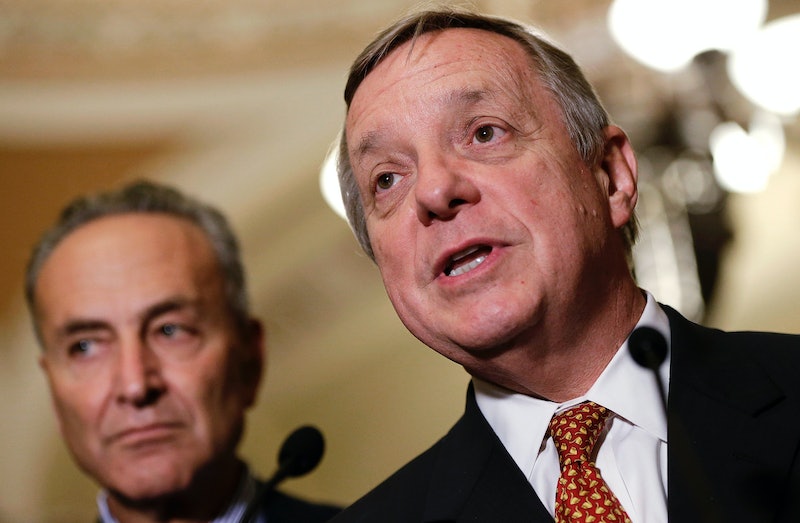 Now that Harry Reid is retiring, we'll probably see Chuck Schumer become the new Democratic minority leader in the Senate — and meanwhile, Dick Durbin has announced his intention to become the Democratic minority whip. Luckily for Durbin, an endorsement from Schumer could make that reality. But there's a problem: former roommates Schumer and Durbin are feuding over an alleged whip endorsement, based on conflicting statements between their spokespeople. This could have major repercussions; the Democratic Party, after all, is already struggling for influence in the Republican-led Congress.

So, what happened? Well, Ben Marter, a spokesman for Durbin, said to Politico, “When Sen. Durbin took Sen. Schumer aside and told him that he would not run for leader, the two senators agreed to support one another." He added that a deal was made: “Schumer as leader and Durbin as whip. And they shook hands on it.”

But Schumer's office doesn't agree with this account. Spokesman Matt House responded to Politico: “That never happened and they know it.”

He then received a shot from Marter in response to the dismissal: “That’s what a deal is.”

We're beginning to see infighting among Democrats on key issues like Iran, with some members dissenting from the leadership. Now that Republicans retain control of both houses of Congress, Democrats will have to unite, should the party want to gain traction before and during 2016.

Durbin is the only senator was has publicly expressed interest in the post. The only potential rival for whip could be Patty Murray of Washington, who hasn't ruled out a run for the position. (Her spokesman said in an email to The Washington Post: "Senator Murray is focused on her current job and isn't going to be speculating about other positions under Senator Schumer in leadership.") An endorsement from Schumer could lock in a win for Durbin, but as of now, that doesn't appear too likely to happen. Should Durbin secure the position, this in-fighting now could hurt the working relationship between the two men later.

Believe it or not, Durbin and Schumer lived together for 22 years in D.C. Any problems they might have had in the House are now spreading to the Senate. This power-sharing struggle is a distraction for the party, and could translate into more power for the Republicans if the Democrats don't get their act together soon.