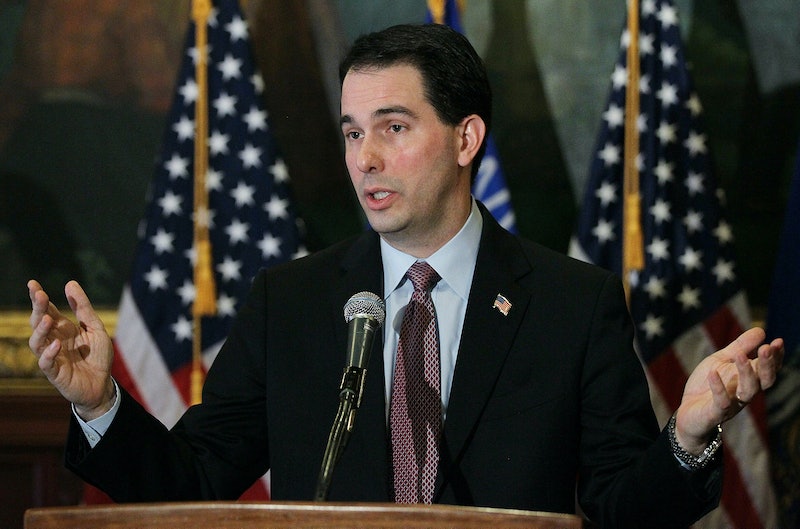 Scott Walker has a personal problem, and one The New York Times suggests could turn into a political one — Walker is allergic to dogs. Why is this a problem? Well, 32 out of 44 presidents have owned a dog. A first pooch has been standard fare in the White House in recent memory; they're as much a part of the first family as the president and first lady. Could America elect a president without a pet?

A Walker spokesperson said the dog allergy situation is “unfortunate, because he loves animals.”

Claire McLean, the founder of the Presidential Pet Museum, explained to The New York Times the importance of pets for candidates because "[i]t humanizes them," and “shows that they are just like me and you, with the kids and the dog.”

But maybe there is a solution for Walker? Malia Obama is allergic to pooches, too, so the Obama clan adopted two hypo-allergenic Portuguese water dogs. Or maybe he could adopt another animal? Governor Chris Christie is also allergic to canines, leaving his kids with a fish instead of a furry friend. (No, it's not quite the same.)

Or perhaps his allergies would attract a new breed of voters? Walker certainly isn't the only American who can't own a pet; those sharing the affliction might be able to better connect to the governor. Hey, maybe this is just what Walker needs to save him from the doghouse in 2016.

A dog did the trick for Richard Nixon, who was in a ruff spot as the 1952 vice presidential nominee. Nixon was accused of benefiting from a large donor fund. He delivered the famous "Checkers" speech about the family's beloved dog, which also happened to be a campaign gift:

Our little girl — Tricia, the 6-year-old — named it Checkers. And you know, the kids, like all kids, love the dog and I just want to say this right now, that regardless of what they say about it, we’re gonna keep it.

Who could take a dog away from a kid? The controversy healed, and Checkers was Nixon's guide dog on the road to the presidency.

Could Walker's allergies really tick-off voters enough that they'll shy away from the ballot box? Probably not. But if Walker had a canine, that might give at least leave him a best friend should the kibble go stale during a presidential run.