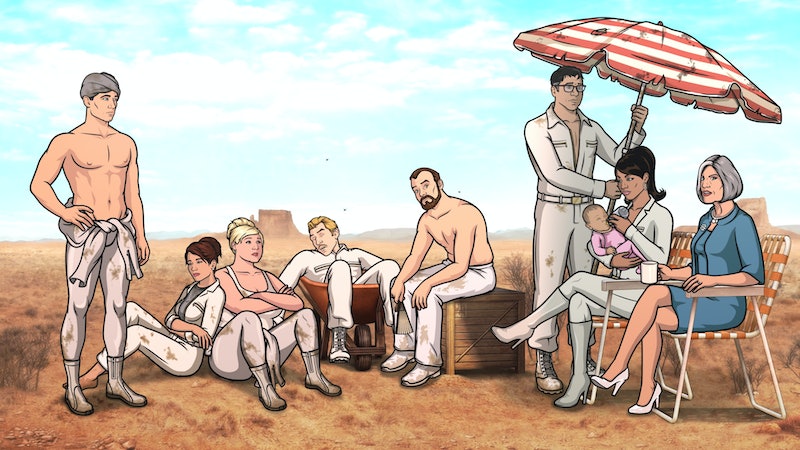 Archer has always been a unique show, but it's definitely the first to ever turned into a spinoff of itself, then returned to its original premise for a triumphant sixth season that still managed to feel fresh despite accidentally naming its spy agency after a terrorist organization. And now that Season 6 proved to be one of the funniest yet, it's time to start looking towards when Archer Season 7 will premiere. Archer Season 7 premiere should be in early 2016, probably in January or February like the rest of the seasons have been. In 2014, Deadline reported that FX chief John Landgraf greenlit the show for both Seasons 6 and 7, so even though the sixth season finale seems like things could end terribly for Archer, Lana, and everyone else in the formerly ISIS, now CIA crew, I'm sure they'll figure out a way for them to survive after Carrie Browstein's scientist shrunk the whole crew (minus baby AJ and Malory, of course) down to microscopic size in order to save the life of an incredibly important scientist.

I think after the Archer Vice experiment, the show has proven that the spy setting is as integral to the plot as "literally/figuratively" jokes or exploring the depths of Cheryl's sexuality. So hopefully Season 7 doesn't open with the entire cast moving to a dude ranch. I'd also miss any member of the key ensemble, and that includes sending AJ away to live with her grandparents, by the way — she is the cutest TV baby this side of the Wee Baby Seamus. But here are a few ways they could attempt to make another series-shaking shift without compromising the series' integrity, yet still ensure the next year has a huge opening. (Phrasing.)

1. Archer Has To Give Up Alcohol

Look, every time they make fun of how much Archer drinks, it's great, but if they managed to turn that into a season-long runner, I would love it. It would play as an inverse of every "Archer gets wasted" joke from the past five seasons.

2. They Somehow Burn Down The Pentagon

If all the arson references in the show's history lead up to the crew standing outside of the CIA burned to a crisp and they're forced to make their own private intelligence agency again, it would be impressive.

Ray's gone back and forth from quadriplegic, to bionic, back to a wheelchair, and then back to able to walk... what if his right arm and eye were also replaced by Krieger? I just want more Steve Austin jokes.

Look it's one of the funniest jokes in the show's history and I love it and I know bringing it back would ruin it... but I'm willing to take that chance.

I think it's been obvious from the beginning that Cyril has all the potential to become the chief antagonist for a season. He's squirrely, constantly crapped on on by everyone else, and a lawyer. The brief time when he became a dictator was just a taste — I want to see him become Ernst Blofeld.

6. Anything But Lana Dying

I know it's been set up that it would be dramatically satisfying to see Archer have to become AJ's single father. But I can't imagine seeing the show without Lana — she's an essential piece of the ensemble.