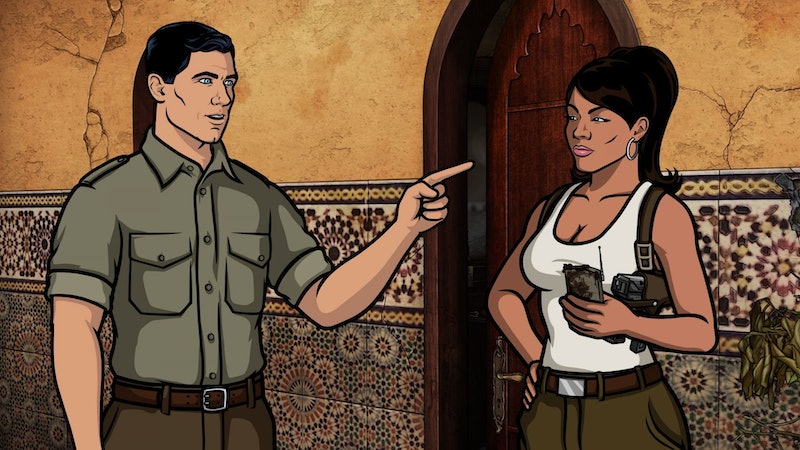 It's back and it's louder, more vulgar, and more awesome than ever: Archer Season 6 premieres Thursday, Jan 8. And while Archer Season 5 was a riff on the 1980s show Miami Vice (hence the second name: Archer Vice. Fans who prefer the show's first four seasons with its spin on spy dramas and a healthy serving of James Bond will be happy to know Archer is basically being "un-rebooted" and returning to its roots for Season 6. That means we can expect more cases-of-the-week full of secret missions, covert ops, and spy games instead of the drug-hawking game that Archer, Mallory, & Co. were into in Season 5. I, for one, can't wait to see Archer, Lana, and the rest of the gang return to the dynamics of spydom that made them who they are. Still, a lot happened in Season 5 and Archer isn't a show to just drop their old news and run: major storylines that came down in Season 5 will certainly impact Season 6 (Christian Slater, anyone?).

And because Archer expects you to have paid attention to is past seasons, let's take a trip down memory lane. Here's everything you need to know about last season:

It's revealed in the beginning of Season 5 that ISIS wasn't actually sanctioned by the U.S. Government. With their money and careers put in jeopardy, the gang turns to drug business trying to sell a metric ton of cocaine. This bold change was met with mixed results from long-time fans. I loved it, even though I figured it wouldn't last beyond Season 5. Even with some interesting curveballs like Krieger's clones (more on that later) last season proved that the spy crew are still essentially themselves.

Archer Vice was a dark, yet bonkers, step into serialized television. What works best about Archer Vice is that we get to learn a lot more about these characters' desires, contradictions, and obsessions. Based on the reviews for Season 6, the show will lack the sense of consequence and full blown interpersonal zaniness of Season 5, but this change back to espionage for the Archer crew should prove to be worthwhile.

This was probably the biggest misstep of Season 5. Dim witted, rich girl Cheryl starts a country singing career as "Cherlene." Kreiger implants a microchip that helps with her performance anxieties, but along with that she also gains a sense of vanity and self confidence while retaining her natural ditziness to a degree. It's then revealed that there was no microchip, Kreiger really just put in a sticker. Which seems really dangerous and totally Archer.

In one of the weirdest storylines last season, Kreiger came across several identical clones of himself. But he isn't sure if he's actually a clone himself. You can definitely see how this totally throws Kreiger's sense of self. We'll see if this hilarious take on cloning will last into the new season.

Pam forms a cocaine addiction which is dark territory for this show. Pam also gets super skinny thanks to her diet being almost exclusively cocaine. Her addiction botches any hope for a successful drug business.

I 'ship Archer and Lana more than is healthy. I mean they're hot together (for cartoons), am I right? Their chemistry, banter, and personality quirks make them an awesome pair. But I was unsure these two crazy kids could work things out. Then it was revealed at the end of Season 5 that Archer is the father of Lana's baby. And my heart sung. This will be the biggest storyline to affect Season 6 as Archer, Lana, their daughter, and Mallory as a grandmother is a pretty unconventional family and I can't wait to see them in action.

In an interview with Grantland Archer Executive Producer Matt Thompson commented on how bringing a baby on board would change things:

It’s about Archer as a man and a father, and it’s about Lana as a woman and a mother, and what it means to their relationship. And it makes for an interesting dynamic. The baby is a tool that deepens your understanding of these characters.

So, What Can We Expect for Season 6?

Awesomeness. Pure, vulgar awesomeness. Archer is basically a great craft beer with whiskey chaser in television form and one I can't wait to enjoy as it returns to form in Season 6.

More like this
Everything To Know About The Possibility Of 'The Essex Serpent' Season 2
By Rachel Mantock
ITV’s 'Grace' Will Likely Return for A Third Season — & Many More After That
By El Hunt
'Who Killed Sara?' Won’t Return For Season 4
By Brad Witter
Grey's Anatomy Fans Refuse To Accept Kaimelia's Shocking Relationship Update
By Brad Witter
Get Even More From Bustle — Sign Up For The Newsletter