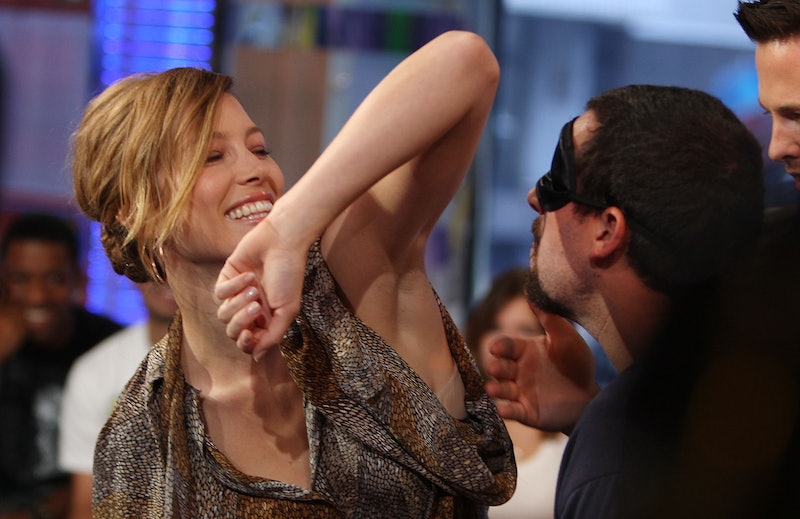 While there are various causes of body odor, most of us are familiar with the association between sweat and stink, especially when it comes from the underarms. But do you know why the armpits especially can have such a displeasing odor? According to Secret Sweat Scientist Kati Bakes, "underarm odor is created when the bacteria in your underarm break down the food that is in sweat." And while other parts of the body can also sweat, more odor comes from the underarms because the sweat cannot as easily evaporate or be wicked off the skin. This is why proper washing and keeping the area dry with antiperspirant is important. However, there are more causes of body odor than just poor hygiene, and it can come from more places than just the underarms.

In addition to hygiene, the types of foods you do and do not eat can actually play a pretty significant role in body odor. There are also other lifestyle and biological reasons that can cause B.O., and the displeasing smells can come from your feet and even your pores. So if you've ever wondered why you smell a little worse after Happy Hour or during certain times of the month, here are 12 causes of body odor that you may not have expected, and how to control them.

Spicy foods, such as those containing curry or garlic, result in sulfur-containing gases when the body breaks them down. These odoriferous gases can be released through pores, giving the body an unpleasant smell for a few hours. You can mask resulting bad breath from spicy foods with mints, gum, or mouthwash, but as far as body odor goes, you'll just have to wait for it to pass.

In addition to generally spicy foods, sulfur-rich foods such as Brussels sprouts, broccoli, and other foods belonging to the cruciferous family can cause body odor. Again, bad breath can be masked, but the change in overall body odor will have to just work its way out of your system. But try not to engage in any activity or setting that will cause you to sweat, as the scent can come through the pores more strongly this way.

Foods that are higher in chlorophyll (what makes plants green) can counteract internal causes of odor, such as those mentioned above. If you're having a spicy meal, try a side of spinach or kale to help reduce odor that might come through pores.

4. Not Getting Enough Magnesium

Not only is magnesium good for having strong and healthy hair and nails but it is also good for decreasing internal body odor. Try eating dark chocolate or almonds to increase the magnesium in your diet, and to neutralize displeasing scents that may come from your body.

As alcohol is broken down and moves through the body, some of it seeps out through the pores resulting in body odor. There isn't any type of alcohol that smells better than any other, though, so just enjoy in moderation to keep the smell down.

When you're ovulating (about halfway between cycles), body temperature can rise about half a degree, causing more sweat and BO. Try using a stronger antiperspirant/deodorant about two weeks after your period ends to help combat this effect.

Tight and heavy clothes, as well as certain materials like Spandex and leather, keep pores from being able to breathe. This means more sweat is trapped against the skin, which can result in increased B.O. Especially on warmer days and when working out, try wearing looser fitting clothes made from cotton or other breathable fabrics.

Wearing closed shoes without socks means feet are essentially bathing in their own sweat and bacteria. If you wear pumps on the daily, try applying an antiperspirant to your feet before slipping on your shoes. Also make sure to wash your feet after prolonged wear, and to take other antibacterial and antifungal precautions as necessary.

If you're not taking care of your feet, "calluses can become a feeding ground for brevibacterium, the same microbe that gives Limburger cheese its infamous scent," according to Prevention. Try to scrub your feet once a week in the shower, and keep them dry to keep bacteria at bay.

How often do you wash your bras? Although they don't have to be washed after every wear, bras do collect a fair amount of sweat from the back and under the arms — and don't get me started on boob sweat. To ensure your bra isn't the culprit of your B.O., try to have enough properly-fitting bras so that you don't have to wear the same one more than three times between washes. Also try wearing bras made of cotton instead of synthetic fabrics, so that some sweat can be wicked away from your body.

Stress-related sweat, such as when you might have an important meeting or a big exam, can actually cause the worst odor. Secret Sweat Scientist Kati Bakes explains:

[Stress sweat] contains a higher amount of "food" for the bacteria. Stress sweat is made of about 20 percent lipids, proteins, and steroids, (the "food") whereas regular sweat contains about only 1 percent proteins (amongst some other components, like electrolytes). This means that the more bacteria you have and the more you sweat (especially stress sweat), the higher the odor.

Task preparation and meditation can help control stress. But if you find you're often surprised with stress, like when meeting new people or taking care of children, try a clinical-strength antiperspirant/deodorant, like Secret Clinical Strength with Adapts & Responds Technology.

Pay attention even to the mild side effects of any prescription medication you take. Some drugs, such as acetaminophen and anti-depressants, can cause an increase in sweat, and therefore an increase in odor-causing bacteria. If you're on medication that increases sweat, try using a stronger antiperspirant/deodorant.