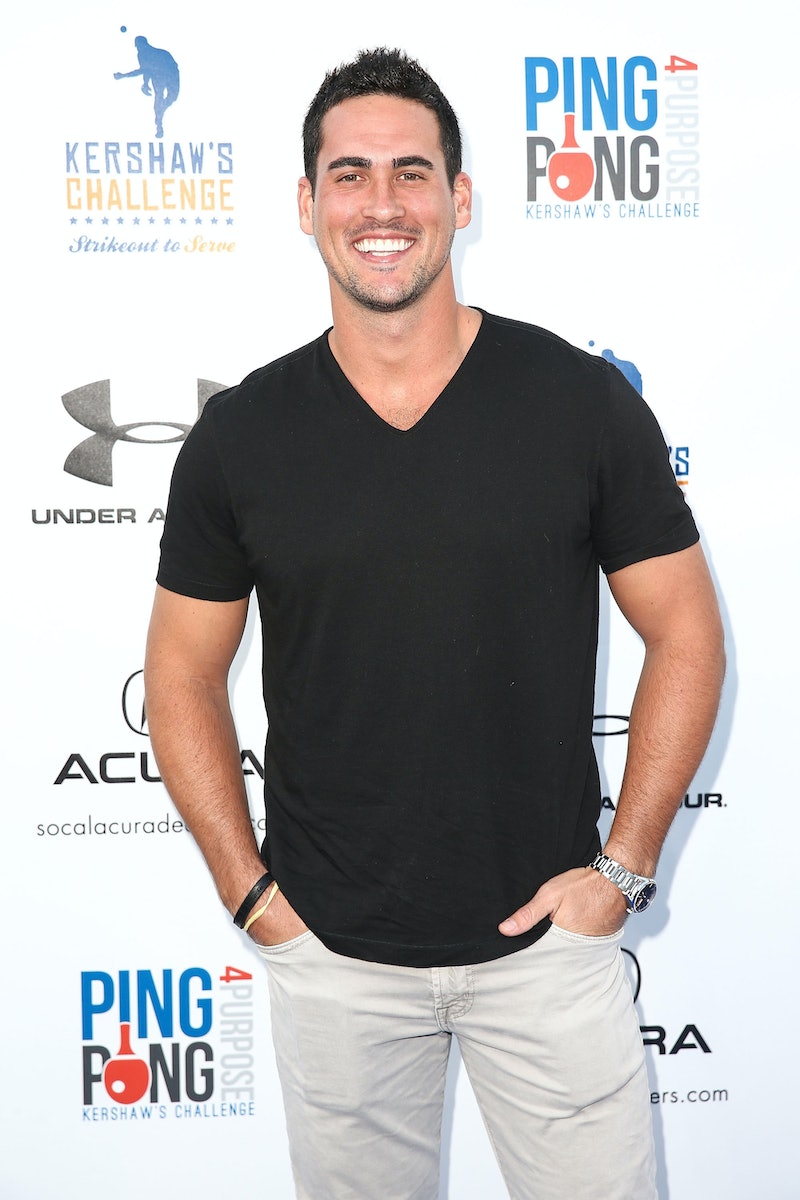 If you haven't gotten your fill of former Bachelor stars dancing, don't worry because Josh Murray says he'd be up for being on Dancing With the Stars — not that he's been asked. However, now that he's put the positive vibes out there, I'm sure he can expect a call from ABC any day now. "I don't know if I could dance that well, but I would do it," Andi Dorfman's ex told E! News. "It would be fun. I love having fun!"

Murray got an up close and personal look at the show last Monday when he and Whitney Bischoff attended to watch Chris Soules dance, and it seems he liked what he saw. But Murray isn't the only member of the Bachelor family who would be great to watch on stage. The dancing show has a long history of inviting past Bachelor members to join the competition. Over the years Trista Sutter, Melissa Rycroft, Jake Pavelka, Sean Lowe, and now Chris Soules have participated. And, while not all of them have had success, they've all been fairly entertaining to watch.

I'm all for Josh Murray joining DWTS, but I think the dancing show should consider these former contestants as well. You can never have too much Bachelor!

On her season with Juan Pablo we learned what a terrible dancer Andi was. She deserves a chance to redeem herself. I bet, with the right amount of practice, she could go far. If Chris Soules can do it, anyone can.

We saw a little bit of her dance moves when Chris Soules stole her away for that private concert date, and she wasn't bad. What if the whole double Bachelorette thing doesn't work out for her, and the house picks Kaitlyn to continue as the only Bachelorette? DWTS would be a nice distraction from that.

A slot on the show was actually offered to Robertson after she and Ben Flajnik got engaged. But Robertson writes in her book, I Didn't Come Here to Make Friends, that Flajnik told her if she did the show their relationship would be over. Now that they've broken up anyway, she deserves that second chance.

She was the bubbliest member of Juan Pablo's season, and just a delight to watch in general. Does she have dancing skills? I don't even care. Just give me more Free Spirit.

She was the runner-up on Chris Soules' season and won a lot of people over with her sweet demeanor. I feel like the Becca we saw on The Bachelor was very withdrawn until later in the season, so I'd love to see her come out of her shell a little more. A dancing show could be the perfect way to make that happen.

DWTS is just an excellent way for America to still get to watch this sweet, smartly dressed man every Monday. Do we need more reason than that?

Sure, Arie's in a happy relationship, but just because he can't do a dating show doesn't mean he can't go on a dancing show! I don't know if he has moves, but I'm still willing to bet he could bring some fire to the dance floor.

I wasn't a huge fan of Ashley I. on The Bachelor. She seemed pretty mean-spirited. But once I saw her on Jimmy Kimmel Live! as a normal person, I realized she was actually pretty cool. I'd love to see her be able to share that cool side with the world by doing something like DWTS.

Petition for Ashley S. to be on every reality show ever because she keeps it real, and she's hilarious.