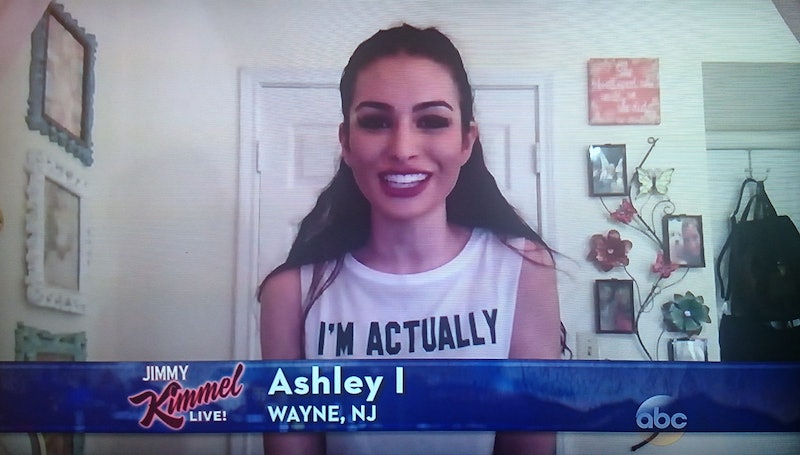 Monday's Bachelor episode ended with a very dramatic and emotional exit for Ashley I. and I was kind of glad. She was one of the more vocal women in the house and Ashley I. tended to be kind of mean. But as usual, television is not all that it appears to be, and Ashley I.'s appearance on Jimmy Kimmel Live! proved she's actually kind of chill.

The Bachelor contestant Skyped in to Kimmel's show after her elimination to talk about her exit, and she seemed very pleasant and funny. Plus, she didn't cry once, so it was her least emotional TV moment ever. Kimmel joked around with her about her dramatic two-on-one by asking her how she felt about Kelsey's ominous, "I know what you did" line. Ashley admitted, "That was one of the most terrifying moments of my life."

Then the two of them discussed how she got home from the desert (in a van rather than the fancy helicopter Chris got), and who she had pegged for a winner (she likes Becca and Whitney). As for her future with Chris? Once she got home she realized a life on the farm wasn't the most realistic for her, so alls well that ends well.

It was a brief interview, but it was nice to see that Ashley's just a normal, pleasant girl. It made me like her so much more so see her handle Kimmel's jokes about her emotional moments with grace. Plus she ended the chat with a Taylor Swift lyric, saying she was just going to "shake shake shake" off the haters, so I have to love her now, obvs.

So I guess this is my daily reminder to Bachelor fans that not all is as it seems on TV, and sometimes even the "mean girls" are nice people in real life.