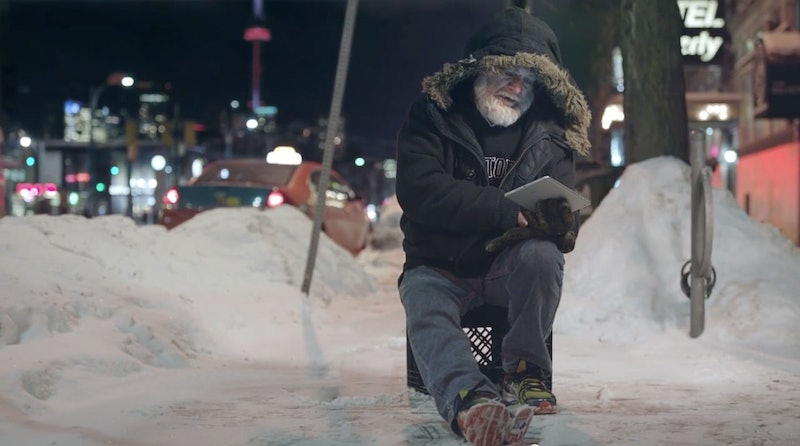 Raising the Roof, a Canadian organization aimed at developing long-term solutions for homelessness, has recently released a heartbreaking video as part of their “Humans for Humans” campaign. The premise of the video is simple: homeless people read tweets about homelessness. The concept is reminiscent of Jimmy Kimmel’s popular series “Celebrities Read Mean Tweets,” with, of course, a major difference: When the casual, ignorant cruelty of the internet is directed not at the famous and powerful, but at those most in need, the results are not funny, but are, rather, extremely upsetting.

Although Raising the Roof has a number of programs in place to help the homeless in concrete ways, the organization also works toward changing common perceptions about homelessness. In its notes for the video, Raising the Roof points out that “[These people’s] reactions will remind you the conversation around the issue needs to change. All humans should work together.” In addition to emphasizing the basic humanity of all homeless people, the video challenges assumptions that all homeless people are the same, and that they are all homeless for the same reasons. It shows that there is no monolithic “Homeless Person”; the subjects here include the young and old, men and women, people with children, people of different racial backgrounds, and people whose periods of homelessness have ranged from a few years to almost half a century. The tweets they read are maddening in their lack of compassion. Here’s just a sampling:

“I wonder if homeless people go to heaven.”

"Maybe if homeless people took care of themselves and looked pretty, we would want to help them. I don't help yellow teeth."

"I was enjoying a latte when I saw a hobo girl across the street. I almost vomited. Get back on your side of the bridge. No one likes you.”

“If home is where the heart is, are homeless people heartless?”

What is most frustrating is that these views are not uncommon; I’m sure that most of us hear people make off-hand comments about homeless people all the time. It’s important to remember that public perceptions of homelessness affect the lives of homeless people in material ways. A 2014 report from the National Law Center on Homelessness and Poverty found that laws effectively criminalizing homelessness are on the rise in the United States. An ever-growing number of cities and states are banning behaviors associated with homelessness, including panhandling, public camping, and sleeping in cars. Such restrictions may remove homeless people from view, but they don’t actually help the homeless find homes, and instead actively make their lives harder.

To learn how to support Raising the Roof, visit the organization’s website. From there, you can also view videos of homeless people responding directly to some of these tweets.